Advanced Search
Nancy Ann Whitney, more popularly known by her professional name Whitney Blake, was an American actress, writer, and showrunner. She gained fame for portraying Dorothy Baxter in the 1960s sitcom ‘Hazel’ and co-creating the sitcom ‘One Day at a Time’. A native of California, Blake became interested in performing very early in her life. She got her start as an actress in small theatre groups in Los Angeles. In 1956, she made her screen debut in an episode of ‘Medic’. A year later, she had her big screen debut in the crime drama ‘My Gun Is Quick’. Over the course of her 42-year-long career, she accumulated over 80 acting credits. Blake and her third husband, Allan Manings, were the co-creators and showrunners of ‘One Day at a Time’, which aired on CBS from 1975 to 1984. The show was remade for Netflix in 2017, with both Blake and Manings receiving due credits. American Celebrities
American Women
California Actresses
Pisces Actresses
Female Film Directors
Childhood & Early Life
Born on February 20, 1926, in Eagle Rock, Los Angeles, California, Whitney Blake was the oldest child of Martha Mae Whitney (née Wilkerson) and Harry C. Whitney. Her father served in the US Secret Service and protected President Woodrow Wilson, his wife, and other political officials.
Blake and her younger brother spent most of their childhood travelling around US and she studied at about 16 different schools. After graduating high school, she enrolled at Pasadena City College.
During this period, she got involved with small theatre groups in the Los Angeles area and performed with them for the ensuing five years. In 1953, she appeared in multiple productions at the Pasadena Playhouse.
Continue Reading Below
Career
Whitney Blake was spotted by agent Sid Gold while she was performing in a Hollywood production of Clare Boothe Luce’s play ‘The Women’. After making her screen debut in ‘Medic’ in 1956, she made a series of other guest appearances in shows like ‘Big Town’ (1956), ‘Circus Boy’ (1957), ‘Cavalcade of America’ (1957), and ‘Mike Hammer’ (1958).
She portrayed the female protagonist, Nancy Williams, in her debut film ‘My Gun Is Quick’. In her next film, the 1959 drama ‘-30-’, she shared screen space with Jack Webb. They played Sam and Peggy Gatlin, a childless couple looking to adopt a baby.
Blake was cast in several TV shows throughout the 1960s and 1970s, including ‘77 Sunset Strip’ (1958-60), ‘Cheyenne’ (1957-60), ‘M Squad’ (1958-60), ‘The Millionaire’ (1957-60), and ‘Tales of Wells Fargo’ (1959-60).
In 1961, she started playing the character Dorothy Baxter in the CBS sitcom ‘Hazel’ (1961-66). Dorothy was an interior designer and the matriarch of the Baxter family, which also comprised of her husband George Baxter (Don DeFore) and their son Harold Baxter (Bobby Buntrock). The show also starred Shirley Booth in the eponymous role of the family maid.
Her last screen appearance was in the 1981 drama ‘A Face in the Crowd’. By the mid-1970s, she had shifted her focus to writing for ‘One Day at a Time’ as her acting career was declining.
In 1987, Blake directed and produced the documentary ‘Reno's Kids: 87 Days + 11’.
Major Works
Whitney Blake and Manings co-created the CBS sitcom ‘One Day at a Time’ (1975-84), which tells the story of a divorced mother and her two teenage daughters. During its nine-season run, the show was a critical and commercial success and won numerous awards. It was part of CBS’ extremely popular Sunday night lineup, which also included ‘Archie Bunker's Place’, ‘Alice’, and ‘The Jeffersons’.
Family & Personal Life
Whitney Blake was married three times. She exchanged wedding vows with John Thomas Baxter in 1944. She gave birth to their oldest child, a son whom they named Richard Whitney Baxter, on November 24, 1944.
Their second son, Brian Thomas Baxter, was born on February 18, 1946. Actress Meredith Ann Baker, born on June 21, 1947, was their third and youngest child. Blake and Baxter divorced in 1953.
Her second husband was talent agent Jack Fields. They got married on April 6, 1957, and divorced in 1967. Her third husband was writer Allan Manings. They tied the knot on August 24, 1968, and were married until Blake’s death in 2002.
On her 76th birthday, Blake informed her children that she had oesophageal cancer. She passed away on September 28, 2002, at her home in Edgartown, Massachusetts. Incidentally, her husband died of the same disease in 2010.
Singing legend Whitney Houston got her name because her parents were inspired by Blake.
In 2017, a remake of ‘One Day at a Time’ began airing on Netflix. The new rendition reimagines the original series with a Hispanic family.

See the events in life of Whitney Blake in Chronological Order 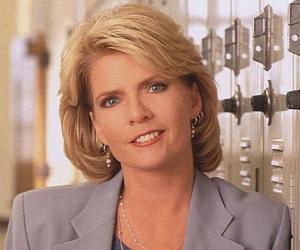