Warren William Zevon was an American rock singer-songwriter and musician. His unstable childhood as the son of a gangster affected him a lot in his later life. He was known for the dark and somewhat bizarre sense of humor in his lyrics and added a mature but cynical edge to the era of New-Wave music. His bestselling album 'Excitable Boy' reached Billboard's Top Ten and produced the hit single 'Werewolves of London'. He was friends with many of California's milder rockers; among them Fleetwood Mac, Jackson Browne, and The Eagles. He spent a few years working as a pianist for the Everly Brothers. In his self-titled second album 'Warren Zevon', he penned singles such as 'Poor, Poor Pitiful Me' and, 'I'll Sleep When I'm Dead'. Two other superlative albums,'Bad Luck Streak In Dancing School' and 'The Envoy' were critically acclaimed, but had dismal sales. He relapsed into alcohol and it would be five years before he resolved his personal problems and put out another record. With the release of ‘Life'll Kill Ya’, he regained top form. He died of lung cancer just two weeks after the release of his final album 'The Wind'. Zevon's work has often been praised by well-known musicians, including Jackson Browne, Bruce Springsteen, Bob Dylan, and Neil Young.
Continue Reading Below Cause of Death: Mesothelioma

American Celebrities
Lyricists & Songwriters
American Men
Illinois Musicians
Male Singers
Childhood & Early Life
Zevon was born on January 24, 1947 in Chicago, Illinois, to Beverly Cope and William Zevon, a Jewish immigrant from Russia. William was a bookie who handled bets and dice games for notorious Los Angeles mobster Mickey Cohen.
By the age of 13, Zevon would occasionally visit Igor Stravinsky’ home and briefly studied modern classical music.
His parents divorced when he was 16 years old and he soon quit high school and moved from Los Angeles to New York to become a folk singer. 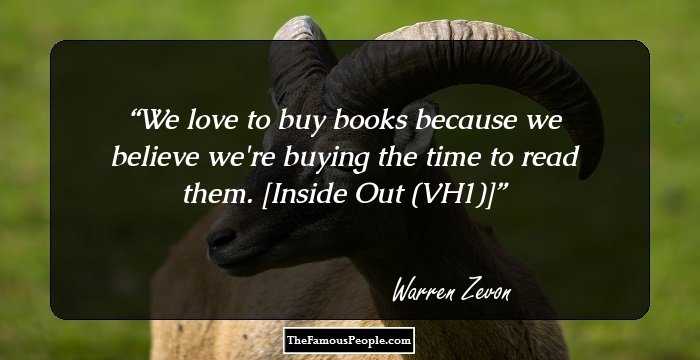 Quotes: Love, Time, Believe, Books
Continue Reading Below
You May Like

Famous Beautiful Women With Green Eyes
Career
He joined with his high school friend Violet Santagelo to form the musical duo lyme & cybelle. The duo is best known for its moderate chart hit 'Follow Me', his first commercial recording.
He wrote several songs for ‘The Turtles’ such as, 'Like the Seasons' and 'Outside Chance', while another composition, 'She Quit Me', was included in the soundtrack for the film, 'Midnight Cowboy' in 1969.
His first attempt at a solo album, 'Wanted Dead or Alive' in 1969, was produced by the cult figure Kim Fowley, under the moniker 'Zevon'. The album was a commercial and critical failure.
During the early 1970s, he toured with the Everly Brothers as keyboard player and musical coordinator. Later, he toured and recorded with Don Everly and Phil Everly, as they tried to launch solo careers.
Dissatisfied with his career and lack of funds, he moved to Spain in 1975. He played in The Dubliner Bar, a small tavern in Sitges near Barcelona, which was owned by David Lindell. Together they composed 'Roland the Headless Thompson Gunner'.
’Bad Luck Streak in Dancing School’, his 1980 album was dedicated to detective novelist Ken Millar, who helped him temporarily curtail his addictions. Its modestly hit singles included 'A Certain Girl' and 'Empty-Handed Heart'.
Zevon's 1982 release 'The Envoy' was a revival of standards but was not a commercial success. The title track was inspired by American diplomat Philip Habib's shuttle diplomacy during Israel's Lebanon incursion.
In 1984, Hindu Love Gods, a rock band consisting of members of R.E.M. Zevon and Bryan Cook, was formed. The band debuted with three scattered gigs in Athens, Georgia and played mostly cover tunes.
In 1987, Virgin Records released his 'Sentimental Hygiene' with singles 'Reconsider Me', and, 'Leave My Monkey Alone'.
Continue Reading Below
In 1991, he became solo artist and released 'Mr. Bad Example', which featured the modest pop hits, 'Searching for a Heart', and 'Things to Do in Denver When You're Dead'.
In 1995, his self-produced album 'Mutineer' covered cult artist Judee Sill's ‘Jesus Was a Crossmaker’, but the album, however, suffered the worst sales of his career.
In 2000, Artemis Records released the reasonably successful, morality themed album ‘Life'll Kill Ya’, containing the hymn-like, 'Don't Let Us Get Sick', and an austere version of 'Back in the High Life Again'.
His ‘My Ride's Here’ in 2002 included, 'Hit Somebody!' and the ballad 'Genius', a song whose string section illustrates the lasting influence of Stravinsky on his work.
In October 2002, he was featured on 'The Late Show with David Letterman' as the only guest for the entire hour. He performed several songs and spoke at length about his illness.
'The Wind', his last album was released in 2003. The album reached number 12 on the US charts. Certified gold by the RIAA, Zevon received five posthumous Grammy nominations for it. 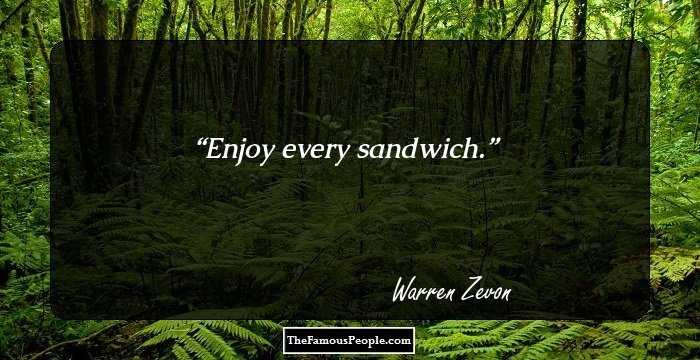 Major Works
Zevon collaborated with Jackson Browne, who in 1976 produced and promoted Zevon's self-titled major-label debut. Termed a masterpiece by the Rolling Stone Record Guide, it had Contributions from many big names in the industry
'Excitable Boy', his third album in 1978 became the best-selling album of his career and had tracks such as, 'Excitable Boy and Werewolves of London', considered macabrely humorous by some critics.
Awards
His album ‘The Wind’ was awarded the Grammy Award for Best Contemporary Folk Album. Disorder in the House, performed by Zevon and Bruce Springsteen, won the Best Rock Vocal Performance (Group or Duo). 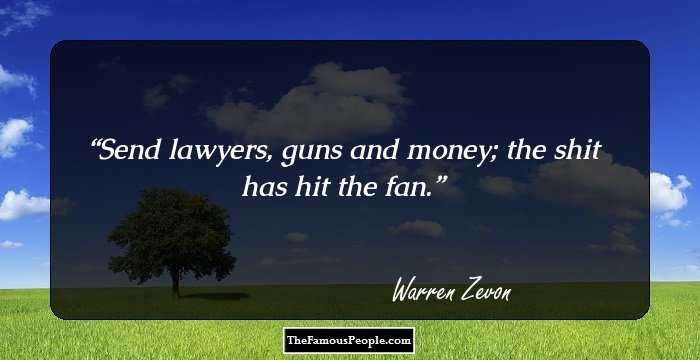 Personal Life & Legacy
Zevon was in a long term relationship with Marilyn "Tule" Livingston, the mother of his son Jordan. He married and divorced Crystal Ann Brelsford and had a daughter Ariel with her.
Zevon was a chronic alcoholic and drugs abuser. He checked himself into an unnamed rehab clinic somewhere in Minnesota and retreated from the music business for several years and he finally overcame the problems.
He died on September 7, 2003 of an inoperable peritoneal mesothelioma (cancer of the abdominal lining that is associated with exposure to asbestos). He refused treatments for he believed that might incapacitate him.
A tribute album titled Enjoy Every Sandwich: The Songs of Warren Zevon was released in 2004 with Jordan Zevon, as executive producer and also performing "Studebaker", a previously unfinished Zevon composition
Trivia
One of this American rock musician’s bizarre and dark lyric songs, "Things To Do In Denver When You're Dead," was later used for the title of a film.
This rock musician suffered from Obsessive Compulsive Disorder like his friend Billy Bob Thornton and they jokingly called themselves, The OCD Brothers.

Quotes By Warren Zevon | Quote Of The Day | Top 100 Quotes

See the events in life of Warren Zevon in Chronological Order