Perhaps no other American writer has earned as many literary awards as Wallace Stegner, who is revered as one of Americas most acclaimed writers. In a writing career that spanned more than 50 years, this Pulitzer Prize winning writer has produced over 24 novels, historical works and collections of stories and essays. His writing essentially celebrated the American West, detailed the fragility of the environment and also highlighted racial prejudice. Apart from a successful writing career, Stegner has enjoyed a long career in teaching both creative writing and literature. He has taught at the University of Utah, the University of Wisconsin, Harvard University and Stanford University. He founded the creative writing program at the Stanford University. After his death, the creative writing fellowship, Stegner Fellowship was created in his honour and memory. Some of his well-known works include, 'The Big Rock Candy Mountain', 'Angle of Repose', 'All the Little Live Things', 'The Spectator Bird', 'The American West as Living Space', ' Discovery! The Search for Arabian Oil' and 'The City of the Living: And Other Stories'. American Celebrities
Short Story Writers
American Men
Male Writers
Male Novelists
Childhood & Early Life
He was born as Wallace Earle Stegner in Lake Mills, Iowa, USA, to the couple, George Stegner and Hilds Paulson. He was mainly raised in Great Falls, Montana; Salt Lake City, Utah and Eastend, Saskatchewan.
In Utah, he was part of the Boy Scout troop at an LDS Church. He later obtained a B.A from the University of Utah in 1930. Subsequently, he obtained a masters and a doctorate degree from the University of Iowa. He also attended the Iowa Writers' Workshop. 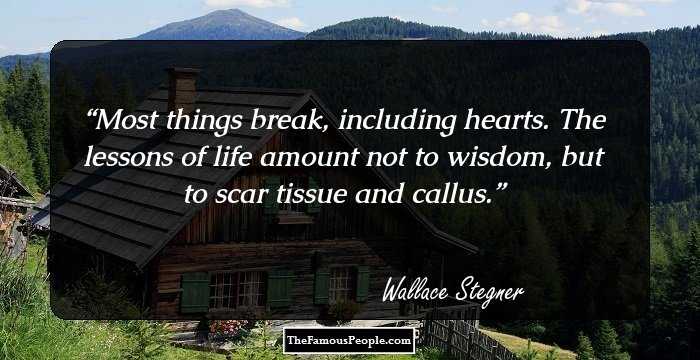 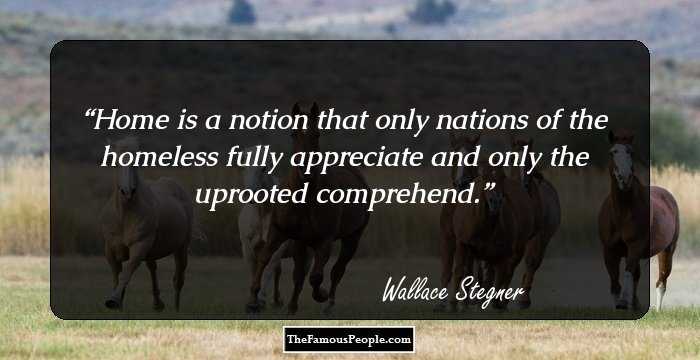 Quotes: Home
Major Works
His novel, ‘Angle of Repose' was voted as the best 20th century novel by the 'San Francisco Chronicle'. The ‘Modern Library’ ranked this book to be 82nd on the list of ‘100 best English-language novels of the 20th century'.
Awards & Achievements
In 1937, he was the recipient of the Little Brown Prize for ‘Remembering Laughter’.
In 1945, he was awarded the Houghton-Mifflin Life-in-America Award and the Anisfield-Wolf Book Award for ‘One Nation’.
In 1967, he was awarded the Commonwealth Club Gold Medal for ‘All the Little Live Things'.
In 1972, he won the Pulitzer Prize for Fiction for 'Angle of Repose'.
In 1976, he won the Commonwealth Club Gold Medal for 'The Spectator Bird'.
In 1977, he won the National Book Award for Fiction for 'The Spectator Bird'.
In 1980, he won the Los Angeles Times Kirsch award for lifetime achievement.
In 1990, he received P.E.N. Center USA West award. 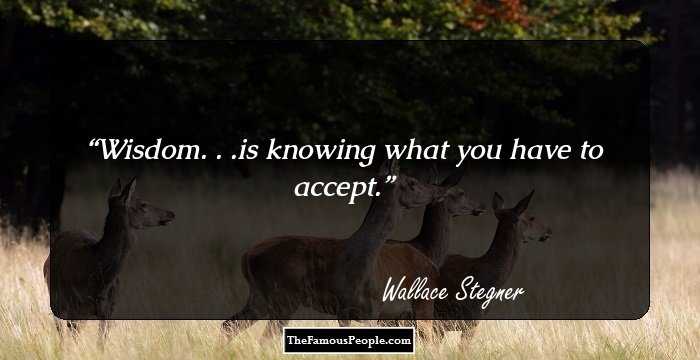 Quotes: You
Personal Life & Legacy
In 1934, he married Mary Stuart Page. His son, Page Stegner is also a writer.
He died on April 13, 1993 at the age of 84, at Santa Fe, New Mexico, from a car accident in the previous month.
In 2010, the University of Utah Press came out with the Stegner Prize in Environmental or American Western History. This was created in his honour.
The Wallace Stegner Lecture is named and conducted in his honour by the Lewis-Clark State College in Lewiston, Idaho.
The two-year creative writing fellowship, Stegner Fellowship at the Stanford University is named and conducted in his honour.
Trivia
'The Big Rock Candy Mountain', 'Angle of Repose', 'All the Little Live Things' are some of the works of this highly acclaimed and Pulitzer Prize awarded writer.
You May Like

Quotes By Wallace Stegner | Quote Of The Day | Top 100 Quotes

See the events in life of Wallace Stegner in Chronological Order