Vincent Gigante is a popular social media celebrity who is popular for his comedy and couple videos on TikTok. His videos have earned him close to 2 million followers on the platform. Additionally, he has a huge fan base on Instagram as well. Towards the end of 2021, he made his debut as a boxer, though he lost his inaugural match. Vincent Gigante began uploading content on TikTok in November 2020. His content mostly comprises comedy and couple videos (together with his girlfriend Samantha Kelly). In one of his early videos on the platform, he shared his coronavirus test result. In another of his video, his girlfriend played a prank on him by informing him about her OnlyFans account. The video became popular and gained over 4 million views. Together, his posts have accumulated over 35 million likes and his account @vincentgiganteee is followed by more than 1.9 million fans.

His Instagram account @vincentgigantee is followed by more than 97K followers. There he posts his selfies, lifestyle photographs and boxing pictures.

In December 2021, Vincent Gigante made his boxing debut against Robbie Anthony Rose. In the event that took place on 25th December in Newark, New Jersey, Gigante lost to his opponent. His bout was the third of the twelve bouts and went on for four, two minutes round.

Vincent Gigante was born on 5th August 2003 in Hoboken, New Jersey. He is in relationship with another social media personality Samantha Kelly. 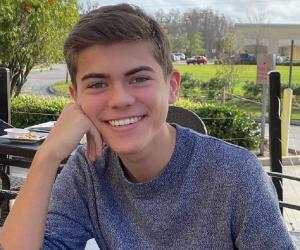