Vincent Philip D'Onofrio is a well-known American actor, singer and producer. Intense, eccentric and imposing, this stage-trained artiste first made his mark as an unstable marine recruit in the film ‘Full Metal Jacket’ for which he completely transformed himself. For that role, D'Onofrio gained 70 pounds and shaved his head. Due to his extraordinary physique, he was highly preferred over other actors for playing the roles of villains in A-list movies. Due to his ability to offer variety in his villain roles, he was given the chance to show off his range and the actor played the role of a serial killer, an evil alien, and many other characters with grey streaks. D'Onofrio spent most of his career doing movies and also signed for a regular role in a series on the small screen where he played the role of an oddball detective. Although the show was a hit, the workload related to the project took its toll and the actor was hospitalized after being diagnosed with exhaustion. Due to this incident, his and his partner’s characters were made to do alternate episodes with some with other team. This Saturn Award winner has also worked as a bouncer in clubs as well as a bodyguard for many celebrities like Yul Brynner and Robert Plant. American People
American Men
New Yorkers Actors
Tall Celebrities
Tall Male Celebrities
Childhood & Early Life
Vincent Phillip D'Onofrio was born in Brooklyn, New York City on June 30, 1959. His father, Gene D'Onofrio was an interior designer and a theater production assistant. His mother, Phyllis, was a server and restaurant manager. He also has two elder sisters Antoinette and Elizabeth.
He lived in New York until his parents divorced and later on, the family moved to Florida.
This boy of Italian descent became interested in magic and started learning tricks from Cuban entertainers who owned a magic shop.
In his teens, D'Onofrio worked backstage in community theatres, assisting in set-building as well as sound production.
He graduated from the Hialeah-Miami Lakes Senior High School. He also studied at the American Stanislavski Theatre and the Actors Studio.
After completing his graduation, he started living in Colorado and began working for construction and laboring sites. 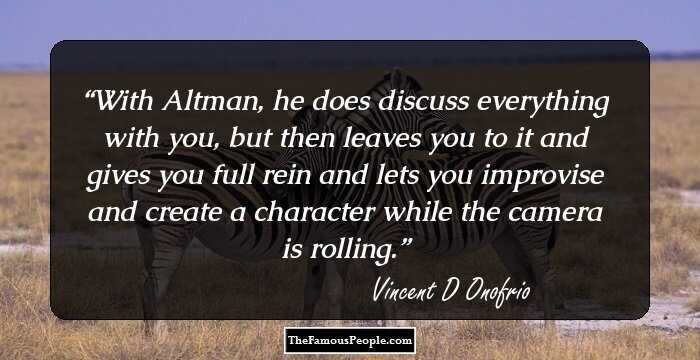 Continue Reading Below
Career
To make both ends meet, Vincent D'Onofrio started working as a bouncer in city clubs, as a bodyguard for Yul Brynner and Robert Plant and also as a deliveryman. In his off-hours, he did stage roles and Off-Broadway parts.
In 1984, D'Onofrio made his Broadway debut in the ‘Open Admissions’.
In 1987, he did the most challenging and unforgettable role of his early acting career – as a clumsy Marine recruit. This role was for the film ‘Full Metal Jacket’.
In 1987, he played the role of ‘Dawson’ in ‘Adventures in Babysitting’. Although D'Onofrio was seen only in one scene of the film, he caught the attention of the public because of his sexy body.
In the year 1988, he worked as a supporting actor in the flick ‘Mystic Pizza’. After this role, he continued playing supporting and minor roles till 2000. One of his supporting roles, the evil "Bug" in the film ‘Men in Black’ brought him immense appreciation.
In 1992, he did the role of an aspiring screenwriter in ‘The Player’. Five years later, in 1997, Vincent D'Onofrio turned to television and played the role of a doomed victim in the episode ‘Subway’ of the popular series ‘Homicide: Life on the Street’.
In 2001, he did another TV series ‘Law & Order: Criminal Intent’ that aired on NBC / USA Network television.
In the year 2006, he worked in ‘The Break-Up’ with Vince Vaughn and Jennifer Aniston.
On March 1, 2008, this star made a cameo appearance in a ‘Saturday Night Live’ episode of a presidential election-related sketch.
Continue Reading Below
In 2009, the actor made his musical debut at Joe's Pub in New York City, playing the character of a comedic singer ‘George Geronimo Gerkie’. He again played the role of Gerkie at New York's Hammerstein Ballroom in December 2009 for Pinfield's Holiday Extravaganza Show and during the premiere of one of his movies in 2010.
In 2012, he worked for the film ‘Chained’, portraying the character of a serial killer who kidnaps a boy.
On November 13, 2012, he joined the cast of an Off-Broadway production for a play that was based on ‘Baal’ written by Bertolt Brecht. The play officially opened the next February.
In 2013, he co-starred in the film ‘Escape Plan’. This movie was filmed in New Orleans and also had Sylvester Stallone and Arnold Schwarzenegger as lead actors. The same year, Vincent D'Onofrio started working for Indian producer and director, Vidhu Vinod Chopra for his movie ‘Broken Horses’.
The next year, he co-starred in the film ‘The Judge’ (2014). The same year, he also released his two songs with Dana Lyn, a multi-instrumentalist and composer
As a producer D'Onofrio has also made some successful films like ‘The Whole Wide World’, ‘Guy’, The Velocity of Gary’ and ‘Steal This Movie’.
In 2015, he appeared in an action adventure film named ‘Jurassic World’. 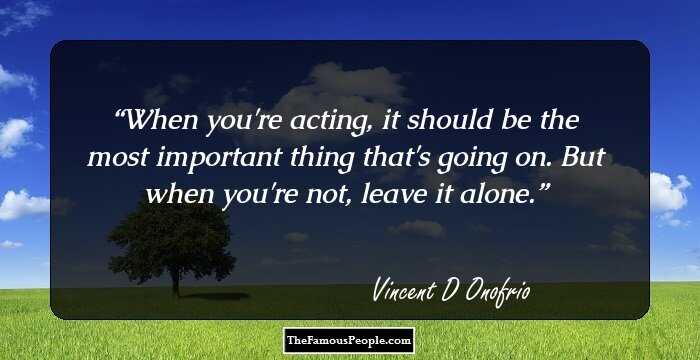 Major Works
Vincent Philip D'Onofrio appeared as Pvt. Leonard Lawrence in the movie ‘Full Metal Jacket’. His role as an overweight, unstable marine recruit was the most defining one in his whole career. For this role, the actor gained 70 lbs, ultimately bringing his total body weight to 280 lbs.
Continue Reading Below
He is also known for his role as the detective Robert Goren that he played on a hit TV show ‘Law & Order: Criminal Intent’ and his role in the film ‘Thumbsucker’ is also considered as a major contribution to the big screen.
He along with his father and sister opened the RiverRun International Film Festival at Winston-Salem, North Carolina.
In 2011, he appeared in an ad produced by the Citizens Crime Commission of New York. This ad urged a ban on large-capacity firearm magazines.
Awards & Achievements
Vincent Philip D'Onofrio won the ‘Golden Space Needle Award for Best Actor’ and the ‘Lone Star Film & Television Award for Best Actor’ for his movie ‘The Whole Wide World’ in 1996.
He won the ‘Saturn Award’ for ‘Best Supporting Actor’ for his film ‘Men in Black’ in 1997.
In 2011, he became a member of the Advisory Board for the Woodstock Film Festival. 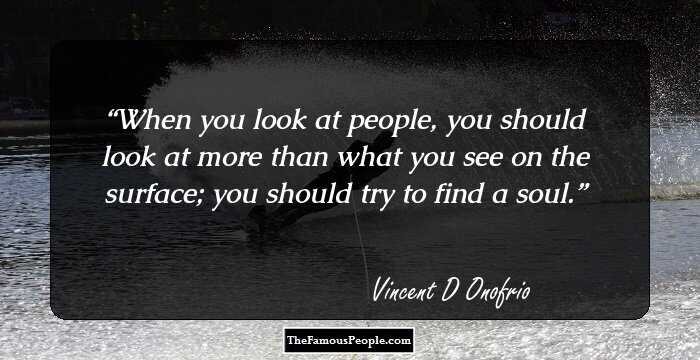 Quotes: Soul
Personal Life & Legacy
Vincent D'Onofrio had an affair with the actress Greta Scacchi in the early 1990s. The couple had a daughter.
On March 22, 1997, he married the Dutch model Carin van der Donk and became the father of a boy in 1999. Although the couple split after a few years, they reconciled later on and had another son.
Trivia
Vincent D'Onofrio was interested in magic in his teens and learned a few tricks from a local magic shop.
After filming the movie ‘Full Metal Jacket’, the actor lost all the weight gained in just nine months.