Mark Vincent, popularly known as Vin Diesel in Hollywood, is an American actor, director, producer, voice over artist and screenwriter. He had an inclination towards acting from a very young age and remained involved with Theatre in New York City throughout his teenage. He took up a creative writing course at his college which gave him the inspiration to start writing screenplays. Diesel started off his entertainment career with his short semi-biographical film ‘Multi-Facial’, for which he did the direction, writing, acting and production - it was screened at the Cannes Festival. But it was not until Steven Spielberg signed him in his multi starrer movie, ‘Saving Private Ryan’ that he received the attention that he deserved. Diesel is well-known for his action role in ‘The Fast and Furious’ series, for which he has reprised the role of ‘Dominic Toretto’ time and again. Various movies from the franchise established him as an action hero in the industry. Other movies by Diesel are, ‘The pacifier’, ‘xXx’, ‘Riddick’, etc. This deep voiced actor manages production companies named ‘One Race Productions’, ‘Racetrack Records’, and ‘Tigon Studios’ alongside acting and has produced movies like ‘Hitman’. American People
American Men
California Actors
Tall Celebrities
Tall Male Celebrities
Childhood & Early Life
Diesel was born on July 18, 1967 in New York City to Delora Sherleen Vincent, who is an astrologer. He has never met his biological father, although he has an African-American stepfather, Irving H. Vincent, who is an acting instructor and theatre manager.
He was always interested in acting and made his stage debut at the age of 7 in the children’s play called ‘Dinosaur Door’. It was showcased at ‘Theater for the New City’ in New York’s Greenwich Village.
He attended Hunter College and remained involved with theatre throughout his teenage. He studied creative writing at his college, which inspired him to write screenplays. He initially worked as a bouncer at the club called Tunnel. 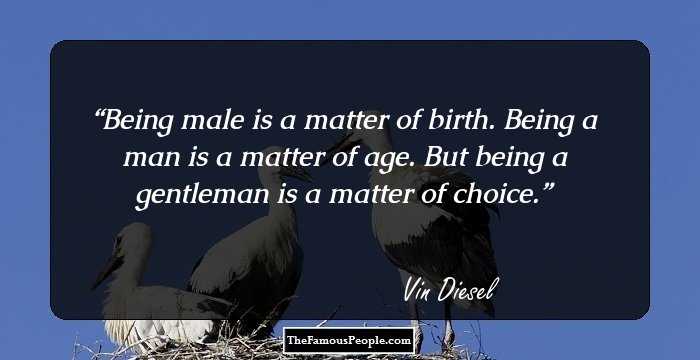 Famous Beautiful Women With Green Eyes
Career
Diesel’s first appearance on the big screen came with a brief role in ‘Awakenings’ in 1990. His appearance was uncredited in the movie. But that did not deter him from his conviction to act.
In 1994, he directed, produced, acted and wrote the script for a short semi-autobiographical film titled ‘Multi-Facial’. The movie was selected for screening at the 1995 Cannes Film Festival.
He made his first feature-length film ‘Strays’ in 1997. It was an urban drama, which he directed, produced, wrote and acted in. It was selected for competition at the Sundance Festival, leading to an MTV deal to turn it into a series.
During the late 1990s, Diesel got the opportunity to work in Spielberg’s ‘Saving Private Ryan (1998)’ as Spielberg was impressed with his work in ‘Multi-Facial’. He also gave voice over for the animation film, ‘The Iron Giant (1999)’.
The beginning of the year 2000 proved to be quiet fruitful for Diesel as his movies ‘Boiler Room’, a crime drama film and ‘Pitch Black’, science fiction thriller in which he played the anti-hero, were released.
Now came the movies that established Diesel’s image as an action hero—‘The Fast and the Furious (2001)’ and ‘xXx (2002)’. These movies gained considerable success at the box office and made Diesel an action idol.
During the mid-2000s, Diesel continued to gain popularity and box office success with movies such as ‘The Pacifier (2005)’—a light hearted comedy and ‘Find Me Guilty (2006)’, in which he played the role of ‘Jack DiNorscio’
In 2006, he reprised his role of ‘Dominic Toretto’ for a cameo in ‘The Fast and the Furious: Tokyo Drift’. He was offered roles in ‘2 Fast 2 Furious’ and ‘xXx: State of the Union’, which he turned down.
He intended to produce and star as ‘Agent 47’ in the film adaptation of the famous video game ‘Hitman’ in 2007 but ended up only as an executive producer on the film.
Continue Reading Below
Towards the end of ‘2000s, Diesel starred in the science fiction action thriller, ‘Babylon A.D. (2008)’ and returned back to ‘The Fast and the Furious’ series ‘Fast & Furious (2009)’.
Diesel again repeated his role as ‘Dominic Toretto’ in the fifth and sixth films from the series: ‘Fast Five (2011)’ and ‘Fast & Furious 6 (2013)’.
He also reprised his role as ‘Riddick’ in the third film of the ‘Riddick’ series ‘Riddick (2013)’. In the same year, Diesel, for his contribution in the film industry, received an honorary star on the Hollywood Walk of Fame. 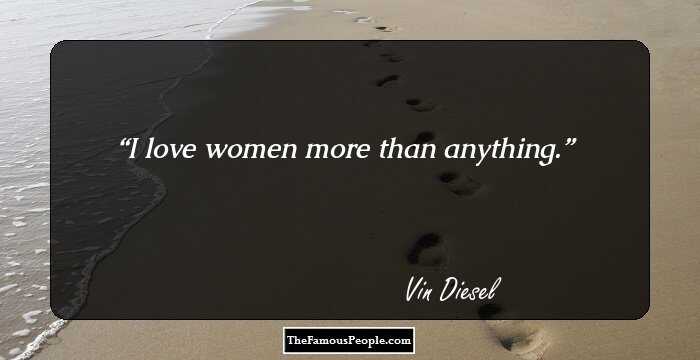 Major Works
There are many roles that Diesel is credited for but the most famous role of his life is ‘Dominic Toretto’ in ‘The Fast and the Furious’ series. Various movies from the franchise established him as an action hero.
Awards & Achievements
Diesel has won awards and accolades for his acting skills, like: MTV Movie Award for ‘The Fast and the Furious’, Spike Video Game Award, Video Software Dealers Association Award and CinemaCon Award. 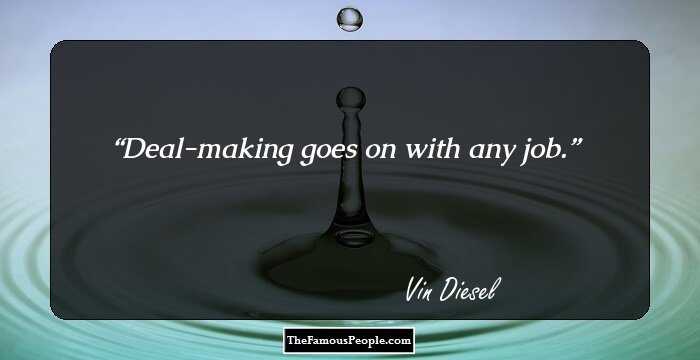 Personal Life & Legacy
Diesel has a daughter, Hania Riley, and a son, Vincent, with his Mexican model girlfriend, Paloma Jimenez.
Trivia
He briefly dated his ‘Fast and the Furious’ co-star Michelle Rodriguez in 2001.
Continue Reading Below
He has a twin brother Paul, a younger brother Tim and a sister Samantha.
He is very protective and secretive about his private life.
He loves the multicultural facets of Dominican Republic and is acquainted with its president, Leonel Fernandez.
He is a fan of the video game ‘Dungeons & Dragons’ and has played that game for over 20 years. He wrote the foreword for the memorial book ‘30 Years of Adventure: A Celebration of Dungeons & Dragons’.
He was offered the role of ‘Matt Murdock’ in ‘Daredevil’ (2003) that eventually went to Ben Affleck.
Diesel’s mother has English, German and Scottish ancestry.
He is a producing partner with George Zakk. Their company is called One Race Productions.
He is the cousin of rapper/producer Kwame ‘The Boy Genius’. Kwame says if you watch his old videos, you will see Diesel in a few of them.
Diesel once worked as a telemarketer, selling light bulbs.
He once wrote a three-page letter to director Steven Spielberg expressing his admiration for his work, particularly ‘Schindler's List’.
The name ‘Vin’ is a shortened version of his real name ‘Vincent’. He received the nickname ‘Diesel’ from his friends, who said he ran off diesel fuel, referring to his non-stop energy.

See the events in life of Vin Diesel in Chronological Order