DID WE MISS SOMEONE?
CLICK HERE AND TELL US
WE'LL MAKE SURE
THEY'RE HERE A.S.A.P
Popularity Index
148
Actors #295
Film & Theater Personalities #637
Quick Facts

Who is Viggo Mortensen?

Viggo Peter Mortensen is a Danish-American actor, producer, and musician. Following his first film appearance in Peter Weir's 1985 thriller ‘Witness,’ he has appeared in many other well-known films, including ‘The Indian Runner,’ ‘Carlito's Way,’ ‘Crimson Tide,’ ‘Daylight,’ and ‘28 Days.’ He received international recognition with his role as Aragorn in the epic film trilogy ‘The Lord of the Rings.’ His performance in ‘Eastern Promises’ earned him a nomination for the ‘Academy Award’ for ‘Best Actor.’ His role in ‘A Dangerous Method’ earned him a nomination for the ‘Golden Globe Award’ for ‘Best Supporting Actor.’ He also received a ‘Best Actor’ nomination at the 89th ‘Academy Awards’ for his performance in ‘Captain Fantastic.’ Also an author and poet, Viggo has various books of poetry, photography, and painting to his name. He founded the ‘Perceval Press’ publishing house to help publish the works of little-known artists and authors. He is a renowned painter and photographer as well. His paintings, which are mainly abstract with fragments of his poetry, have been featured in galleries worldwide. As a musician, he has experimented by mixing his poetry and music. He has been granted an honorary doctorate by his alma mater, ‘St. Lawrence University.’
Recommended Lists: Danish Men
New Yorkers Actors
Libra Actors
Danish Actors
Childhood & Early Life
Viggo Peter Mortensen was born on October 20, 1958, in New York City, to American mother Grace Gamble and Danish father Viggo Peter Mortensen Sr. While his maternal grandfather was a Canadian, his maternal grandmother was from New England.
His family moved a lot, frequently shifting to different countries. He attended a primary school in Buenos Aires where his father managed poultry farms and ranches. His parents got divorced when he was 11, and his mother returned to New York with him.
He graduated from ‘Watertown High School’ in 1976. He attended ‘St. Lawrence University’ in Canton and earned a bachelor's degree in Spanish studies and politics in 1980.
After graduating, he lived in England and Spain for some time before moving to Denmark where he took up various jobs like driving trucks and selling flowers. He eventually returned to the US to pursue an acting career.
Continue Reading Below
You May Like

American Actors
Actors Who Are In Their 60s
Danish Film & Theater Personalities
American Film & Theater Personalities
Career
Viggo Mortensen made his film debut in ‘The Purple Rose of Cairo,’ but unfortunately his scenes were deleted. In 1985, he made an appearance as an Amish farmer in Peter Weir's ‘Witness.’ In the same year, he was featured in ‘Search for Tomorrow,’ an American television soap opera, where he played the role of Bragg.
In 1987, he acted in the Martin Sherman play ‘Bent’ which was about homosexual concentration camp prisoners. In the same year, he guest-starred as a police detective in the series ‘Miami Vice.’
In the 1990s, he appeared in supporting roles in a number of films like ‘The Portrait of a Lady,’ ‘Young Guns II,’ ‘Prison,’ ‘Leatherface: The Texas Chainsaw Massacre III,’ ‘The Indian Runner,’ ‘The Young Americans,’ and ‘The Crew’ among others. His supporting role as Master Chief John Urgayle in ‘G.I. Jane’ was significant.
The major breakthrough in his career came in 1999, when Peter Jackson cast him as Aragorn in ‘The Lord of the Rings’ film trilogy. He often performed his own stunts and was even injured several times.
Viggo Mortensen composed the music for ‘The Lord of the Rings: The Return of the King’ soundtrack, in which he also sang ‘Aragorn's Coronation.’ In the extended DVD edition of the ‘Lord of the Rings’ movie ‘The Fellowship of the Ring,’ he sang ‘The Lay of Beren and Lúthien.’
In 2002, utilizing some of his earnings from ‘The Lord of the Rings’ films, he, along with his partner Pilar Perez, established the ‘Perceval Press’ to help publish the works of little-known artists.
In 2004, Viggo Mortensen was cast as Frank Hopkins in ‘Hidalgo,’ which told the story of an ex-army courier who competes with his horse Hidalgo in a desert race for a contest prize.
He was featured in David Cronenberg's movie ‘A History of Violence,’ an American crime thriller film, written by Josh Olson in 2005. It was an adaptation of the 1997 novel of the same name.
In 2006, he appeared in the Spanish film ‘Alatriste’ as Captain Diego Alatriste. The film was based on the series of novels, ‘The Adventures of Captain Alatriste.’ In 2007, he starred as a Russian gangster in the film ‘Eastern Promises,’ directed by David Cronenberg.
Continue Reading Below
In 2009, he appeared as himself in ‘Reclaiming the Blade,’ a documentary written and directed by Daniel McNicoll. In the documentary, Viggo Mortensen talked about his passion for swords and his sword-work in films like ‘The Lord of the Rings’ and ‘Alatriste.’ In the same year, he starred in ‘The People Speak,’ a documentary film.
He then starred in ‘The Road,’ the film adaptation of Cormac McCarthy’s novel of the same name. In 2011, he was featured in ‘A Dangerous Method,’ a German-Canadian-American-British historical film directed by David Cronenberg.
A highly creative individual, Mortensen experimented by mixing his poetry and music to produce a new art form. He collaborated with guitarist Buckethead for a number of albums which were released under his own label ‘Perceval Press’ or ‘TDRS Music.’
He is also an author and has published many books of poetry, photography, and painting. These include ‘Ten Last Night’ (1993), his first collection of poetry, ‘Linger’ (2005), ‘I Forget You For Ever’ (2006), ‘Skovbo’ (2008), a collection of photographs and poems, and ‘Canciones de Invierno–Winter Songs’ (2010), a collection of photographs and poems.
Mortensen is a painter and photographer as well. His paintings are often abstract and contain fragments of his poetry. His paintings have been featured in many galleries worldwide.
He also starred in films like ‘Captain Fantastic’ (2016) and ‘Green Book’ (2018), for which he received his second and third ‘Academy Award’ nomination, respectively.
Recommended Lists:

Libra Men
Major Works
Viggo Mortensen earned critical acclaim for his portrayal of Aragorn in ‘The Lord of the Rings’ movie series. His character was ranked No. 15 in a survey of ‘The 100 Greatest Movie Characters' conducted by ‘Empire’ in 2015.
In 2005, he received critical acclaim for his performance in ‘A History of Violence.’ In 2007, he was once again praised for his role in ‘Eastern Promises.’ His nude fight scene in the film was considered a benchmark scene.
Awards & Achievements
In 1987, Viggo Mortensen’s performance in the play ‘Bent’ won him a ‘Dramalogue Critics' Award.’
Continue Reading Below
In 2005, he was nominated for a ‘Satellite Award’ for ‘Outstanding Actor in a Motion Picture’ for his role in ‘A History of Violence.’
In 2006, he was granted an honorary doctorate by his alma mater, ‘St. Lawrence University.’ On October 13, 2006, he was awarded the Gold Medal of the Province and the City of León, Spain.
In 2007, his role in the movie ‘Eastern Promises’ earned him an ‘Academy Award’ nomination for ‘Best Actor.’ He also won the ‘Best Performance by an Actor in a British Independent Film’ at the ‘British Independent Film Awards.’
He was awarded the ‘Knight's Cross of the Order of the Dannebrog’ on April 16, 2010.
In 2011, his role in ‘A Dangerous Method’ earned him a nomination for the ‘Golden Globe Award’ for ‘Best Supporting Actor—Motion Picture.’
He earned a ‘Best Actor’ nomination at the 89th ‘Academy Awards’ for his performance in ‘Captain Fantastic’ in 2017.
Personal Life
Mortensen holds American and Danish citizenship.
He married actress and singer Exene Cervenka on July 8, 1987. On January 28, 1988, their son Henry Blake was born. The couple got separated in 1992 and was divorced in 1997. Since 2009, Viggo has been in a relationship with Spanish actress Ariadna Gil.
He is a fan of soccer and his favorite players are Diego Maradona and Héctor Bambino Veira. Besides Argentine and Danish national teams, he supports Argentine club ‘San Lorenzo de Almagro,’ English team ‘Fulham FC,’ and Turkish team ‘Besiktas.’ Hockey is his next favorite sport and he supports the ‘Montreal Canadiens,’ ‘New York Mets,’ and ‘New York Giants.’

See the events in life of Viggo Mortensen in Chronological Order 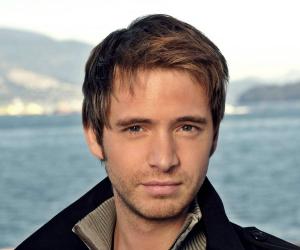