Sports history’s first baseball ‘millionaire’, Ty Cobb is remembered as one of the most notorious sportsmen in the history of American baseball. His freakish behavior on field combined with his erratic, ambitious personality, made him ‘the one to beat’ in the game. Many believe his reputation as one of the toughest yet admirable baseball players is unmerited - however, his statistics and records speak volumes about his personality and determination, otherwise. To date, his career for batting average, which was .366, remains uninterrupted and is still the highest in the history of the game. He was the leader in runs scored with 2,245, and was the all-time hit leader until Pete Rose obscured him on the field. Fondly called ‘The Georgia Peach’, Cobb the fearsome American League Baseball outfielder, is remembered for slipping into bases, feet first, with his points high. He played over 3,035 major league games and also committed 271 errors, the greatest by any American League player. His legacy, although tarnished to a certain extent, still manages to retain a strong foothold in the world of sports. His violent temperament and aggressive playing style remain testament to his steady records on field. Even though he was disliked by many during his lifetime, he still left an indelible impression with his playing style, leaving much to be fulfilled at the time of his untimely death. Alex Rodriguez
Baseball Players #16
Sportspersons #292
DID WE MISS SOMEONE?
CLICK HERE AND TELL US
WE'LL MAKE SURE
THEY'RE HERE A.S.A.P
Quick Facts

Cause of Death: Diabetic Coma

American Celebrities
Male Sportspersons
American Sportspersons
American Baseball Players
Sagittarius Men
Childhood & Early Life
Tyrus Raymond Cobb was born December 18, 1886 to William Herschel Cobb and Amanda Chitwood Cobb in Narrows, Georgia.
From very early on, his father had a great influence on his life and encouraged him to join organized baseball teams like the Royston Rumpers, Royston Reds, Augusta Tourists and the Anniston Steelers.
After joining the Steelers for a monthly salary of $50, he started getting noticed for his incredible baseball talent. He was eventually sold to the American League team, the ‘Detroit Tigers’ for a salary of $750, in August 1905.
An incident on August 8, 1905, changed Cobb’s outlook towards life and his personality forever. He sometimes attributed his violent on-field behavior to this particular incident which shook him. His father was shot dead by his mother in a freak incident, when his father suspected Cobb’s mother of infidelity and decided to sneak up on her in the bedroom to catch her in the ‘act’.
Believing her husband to be someone else after seeing his outline, she picked up the revolver and killed him in an act of self-defense. She was later charged with murder and acquitted the following year. 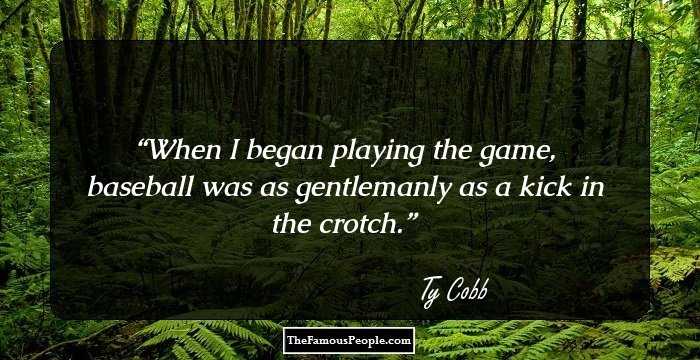 The Best Black Actresses Of All Time
Career
Three weeks after his father was killed, he debuted with the ‘Detroit Tigers’ on August 30, 1905, at the age of 18—the youngest player in the league ever. His success with his debut match gained him a money-spinning deal with the Tigers for $1,500 for the next year.
His volatile temperament alienated his teammates from him and he was being targeted by expert players. In 1906, he became the team’s permanent center fielder and hit an average of .316 in 98 games, the second-highest batting average for a 19 year old.
With his talent and sheer hard work, he led the Tigers’ to three consecutive wins from 1907 to 1909. At the age of 20, he became the youngest player to have won a ‘batting championship’.
From 1908 to 1909, he agreed to coach the baseball team of the Clemson Agricultural College of South Carolina for a fee of $250 per month. However, this did not materialize.
In 1908 season, the ‘Detroit Tigers’, finished ahead of the Chicago White Sox and he once again, won the batting title, with a batting average of .324.
In 1909, the Tigers won the American League banner and during this series, Cobb stole home in the second game, igniting a three-run rally. He finished with a batting average low of .231 in the last World Series and the Tigers lost to Honus Wagner and the Pirates.
The year 1911 proved to be a landmark one for Cobb. He had a 40-game hitting splash. He also led the American League with 248 hits, 147 runs, 83 stolen bases, 47 doubles, 24 triples and a .621 slugging percentage.
When Cobb played against the New York Highlanders in 1911, he tied the game with a two-run double. The following year, he was deferred from the American League after he struck a troublemaker, Claude Lueker.
In 1915, he set the single-season record for stolen bases with 96, which stood until Maury Wills broke it much later. His record of five batting titles was broken the next year, when he placed second with .371 compared to Tris Speaker’s .386.
Continue Reading Below
In 1917, he hit in 35 consecutive games and the same year, he was also cast in the film, ‘Somewhere in Georgia’ as himself. He was paid a handsome sum of $25,000 plus for the film.
In 1918, he was recruited in the Chemical Corps branch of the United States Army and was sent to the Allied Expeditionary Forces in Chaumont, France. He stayed for approximately 67 days overseas, before receiving a worthy release and being sent back to the United States. During his tenure there, he was given the rank of Captain.
He earned his 3000th hit against the Boston Red Sox on August 19, 1921. Babe Ruth, the newest player of the New York Yankees, began to hog some of Cobb’s limelight, which angered Cobb. The same year, he became the manager of the ‘Detroit Tigers on his 34th birthday and signed a deal worth $32, 500.
In 1922, he tied a batting record set by Wee Willie Keeler, with four five-hit games in a season.
On May 5, 1925, he set a new American League record when he went in for three home runs, a double, two singles and 16 bases, which set a whole new record, beating Ruth. At the end of the series, the 38-year-old player had gone 12 for 19 with 29 total centers and then went back to hitting-and-running.
In 1926, he announced his retirement from professional baseball. The next year, he became the first member of the ‘4000 hit club’. He retired a very rich man and toured Europe with his family, before returning to his home in Georgia.
Post-retirement, his competitive spirit still burned inside him. He played against Babe Ruth in a number of charity golf matches in Detroit, Boston and New York and won all of them.
Towards the end of his life, he began to work on his autobiography, ‘My Life in Baseball: The True Record’, along with writer, Al Stump. 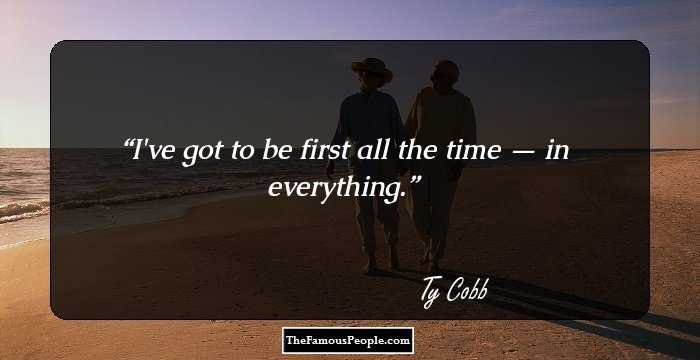 Quotes: Time
Continue Reading Below
Awards & Achievements
In 1911, he was selected the American League MVP.
He was bestowed a Chalmers car, for being voted the American League MVP by the Baseball Writers Association of America.
He was inducted into the Baseball Hall of Fame, in 1936.
Personal Life & Legacy
He married Charlotte ‘Charlie’ Marion Lombard, in August 1908. The couple lived on her father’s estate and then moved to their own house, five years later.
In 1930, he moved with his family into a Spanish ranch estate in a millionaires’ municipality. Around the same time, his wife filed for divorce and the couple split in 1947, after 39 years of marriage. They had three sons and two daughters. It is believed that he was very difficult as a father and as a husband.
Towards the end of his life, he indulged in other pursuits including fishing, golfing and polo. He also became a heavy smoker and an alcoholic.
He married Frances Fairbairn Cass, a divorcee, in 1949, at the age of 62. After a few years, the couple divorced in 1956.
After two of his sons passed away, he began bequeathing large sums of his money and built a Cobb Memorial Hospital, the Cobb Educational Fund and also the Ty Cobb Healthcare System.
Throughout his life, he was known for his physical confrontations and fights with people, particularly African-Americans. However, in his final years, his views changed and he began to support the African-Americans joining baseball leagues and playing with the rest of the team.
He was diagnosed with cancer, diabetes, high blood pressure and an enlarged cancerous prostate towards the end of his life. He spent most of his final years shunting between his house and the hospital and finally passed away at Emory University Hospital, amidst family and friends.
Approximately 150 people attended his funeral service and he was interred at the Cobb family mausoleum, next to his loved ones, in Royston. At the time of his death, he was believed to have been worth $11. 780 million.
After his death, the Ty Cobb Educational Foundation circulated nearly $11 million in allowances to Georgians.
After 37 years of his death, the Ty Cobb Museum and the Franklin County Sports Hall of Fame were established in his honor.
In 2005, his hometown hosted a baseball game to commemorate the 100th anniversary of Cobb’s first major league game.
A new baseball stadium at Hampden-Sydney College is known as the Ty Cobb Ballpark. 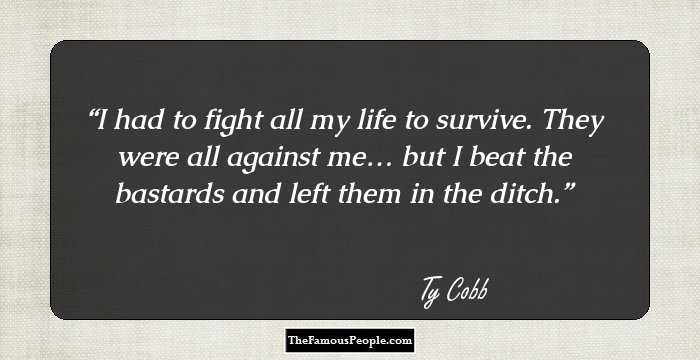 Quotes: Life, I
Trivia
One of this famous American League baseball player’s favorite hobbies was dealing in stocks and bonds, thus playing with his personal wealth. He was a major stockholder in The Coca-Cola Corporation and General Motors, associations that he held throughout his life, which also contributed to his immense wealth in the end.
You May Like

See the events in life of Ty Cobb in Chronological Order