Trey Parker, born as Randolph Severn Parker III, is a highly talented multifaceted individual—he is an actor, screenwriter, voice artist and producer all rolled into one. He is best known to his fans as the co-creator of the adult animated series ‘South Park’ which he created with his best friend and business collaborator, Matt Stone. The series characterized by its use of slapstick humour, violence, and sexual innuendos meant for a mature adult audience caused quite a stir at the time of its telecast and soon became the highest rated cable program. Parker’s creative streak and cheekiness were evident from his childhood; he wrote and performed in a sketch called ‘The Dentist’ complete with lots of fake blood in a school talent show—an incident which freaked out many of the students. The self-proclaimed film geek and music buff developed a love for musical theatre as a teenager and performed with a community theatre. While still in the university, he made his first animated short film ‘Jesus vs. Frosty’ with fellow student Matt Stone. The duo then proceeded to Hollywood to try out their luck. They found big success with the adult animated series ‘South Park’ which won them numerous awards and accolades. American People
Voice Actors
T V & Movie Producers
American Men
Colorado Actors
Childhood & Early Life
Parker is the son of a geologist father, Randy and an insurance broker mother, Sharon. He has one older sister, Shelley.
A creative child, he used to perform in his school’s talent shows. He began writing sketches as a sixth grader and developed a love for musical theatre as a teenager. He performed in ‘The Best Little Whorehouse in Texas’ and even designed the sets for the community theater’s production of ‘Little Shop of Horrors’.
He graduated from the Evergreen High School and attended Berklee College of Music. He later went to the University of Colorado to study music and Japanese. While at the university he met Matt Stone who would later become his best friend and business collaborator. 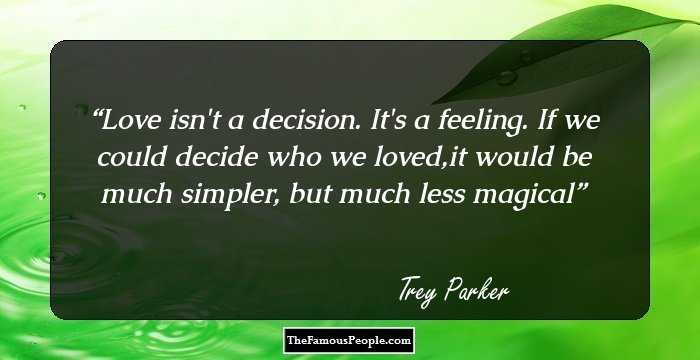 Quotes: Love
Continue Reading Below
Career
Parker and Matt Stone began making animated movies while still at the university. They made ‘Jesus vs. Frosty’ using just construction paper, glue and an old film camera. The movie was premiered at a student film screening in 1992.
The duo wrote and directed an independent black comedy musical called ‘Cannibal! The Musical’ that was loosely based on the true story of Alfred Packer in 1993.
In 1995, they created another animated film called ‘Jesus vs. Santa’. The plot revolved around the adventures of four boys. The film was widely circulated on the internet and was spotted by the cable network Comedy Central which approached Parker and Stone to develop the ‘South park’ series.
The adult animated sitcom ‘South Park’ premiered on the Comedy Central television network in 1997. The show became famous for its crude language, sexual content and dark humour which were intended for a mature audience. The show became one of the channel’s highest rated shows.
The success of ‘South Park’ propelled the duo to co-write and produce a full length feature film based on the show. ‘South Park: Bigger, Longer & Uncut’, a musical comedy film, was released in 1999. The film was a critical as well as a commercial success and was nominated for the Academy Award for Best Original Song for ‘Blame Canada’.
Parker and Stone created a comedy television series ‘That’s My Bush!’ that was aired on Comedy Central during April-May 2001. The series revolved around a fictional account of the personal life of President George Bush.
Parker directed a satirical action comedy film ‘Team America: World Police’ in 2004 which he co-wrote with Matt Stone and Pam Brady. The film made fun of big budget films and the politics of the U.S.
Parker and Stone, in collaboration with Robert Lopez created the book, lyrics and music for a theatrical production, ‘The Book of Mormon’, a religious satire that first premiered in 2011. The show makes fun of the organized religion and musical theatre. 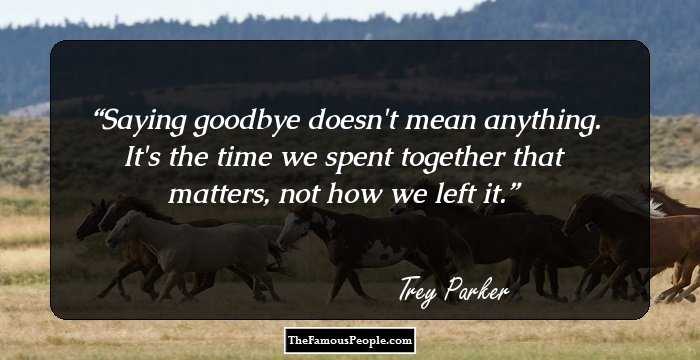 Quotes: Together, Time
Continue Reading Below
Major Works
Parker is best known as the co-creator of the highly popular adult animated comedy series ‘South Park’. The series satirized a wide range of topics and won several awards and accolades, including numerous Primetime Emmy Awards.
Awards & Achievements
He won the Grammy Award for Best Musical Show Album for ‘The Book of Mormon: Original Cast Recording’ in 2011.
He won four Tony Awards for the theatrical production ‘The Book of Mormon’ including the award for Best Direction of a Musical in 2011.
The series ‘South Park’ has received five Primetime Emmy Awards, the most recent one being Primetime Emmy Award for Outstanding Animated Program for the episode ‘Raising the Bar’ in 2013. 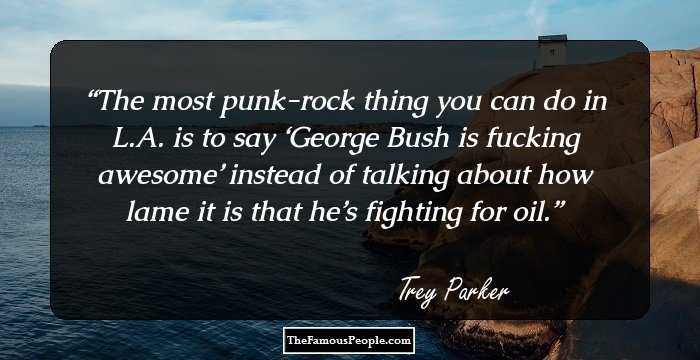 Quotes: You
Personal Life & Legacy
He married Emma Sugiyama in 2006. The marriage was short-lived and ended in 2008.
Currently, he is reported to be in a long-term relationship with Boogie Tilmon with whom he is expecting a child.
Trivia
Several characters in the ‘South Park’ series are named after his own family members.

See the events in life of Trey Parker in Chronological Order