Torrence Hatch, popularly known as Boosie Badazz, is a renowned American rapper. From starting his life on the rough streets of Baton Rouge to enjoying fame as a well-known rapper, Boosie has seen it all. Despite all the ups and downs in his early life, he was determined to make it big because he had the hidden talent of rapping in him. He started gaining fame with his 2009 album ‘Superbad: The Return of Boosie Bad Azz ’. He then proceeded to release a number of albums, and also contributed to several mixtapes and compilations. The trendsetting rapper has collaborated with many southern hip-hop celebs like Three Six Mafia, Yung Joc, Webbie and Bun B. Now he has stepped into other departments of the entertainment industry as well—he has signed some acting assignments, and has also started his clothing line. As his popularity started rising, Boosie got entangled in some legal issues and was sentenced to eight years in prison. However, one of his albums was released when he was serving his term. And soon after his release, he expressed his wish to move on with his hip-hop career. He wasted no time, and started working on his forthcoming album.
Continue Reading Below 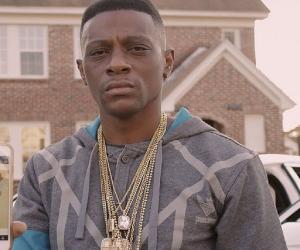 American People
American Men
Male Rappers
Male Singers
Scorpio Rappers
Childhood & Early Life
Boosie Badazz was born as Torrence Hatch on November 14, 1982, and was raised in Southside Baton Rouge, a notorious place in Louisiana which is known for drugs and gunplay. His father was a drug addict, and struggled with addiction till his death in 1997. (According to some reports, he was murdered.) His mother was a schoolteacher. He has seven siblings.
His parents nicknamed him Boosie and he was later called Lil Boosie. He was a good basketball player, and his mother hoped that his good sportsmanship would help him get into a good college. However, he got involved in drugs, and was kicked out of high school.
Continue Reading Below
You May Like

The Hottest Male Celebrities With The Best Abs
Career
When Boosie turned to rapping, his cousin Young Bleed introduced him to rapper C-Loc. He took Boosie under him and mentored him. Boosie joined the ‘Concentration Camp’ group in 1996, at the age of 14. He was the youngest member in the group.
Besides Young Bleed and C-Loc, the group consisted of six other members. Upon joining the group, Boosie debuted on C-Loc’s fifth album, ‘It’s A Gamble’ in 2000, and contributed to Concentration Camp’s third studio album ‘Camp III: Thug Brothas’ in the same year.
When Young Bleed left the group, Boosie got the opportunity to take the prime position in the group, and became an important member of the group. He recorded his debut album, ‘Youngest of da Camp’ in 2000.
In 2001, his big breakthrough came when he joined Pimp C's Trill Entertainment, and his album ‘For My Thugz’ was released in 2002. He also did his first mixtape ‘Boosie’ in 2002.
In Trill, he was paired with rapper Webbie for the album ‘Ghetto Stories’, released in 2003, and ‘Azz Mixtape Vol. 1’ launched in 2004. In the same year, ‘Trill Azz Mixes II’ was released. His second album, ‘Gangsta Musik’ was also released with Webbie in 2004.
In 2004 he released ‘Both Sides of the Track’ with South Coast Coalition, and a compilation mixtape ‘Bad Ass’ with a few new tracks like ‘Trill Shit’.
In 2005, Boosie collaborated with Lava House Records to release ‘United We Stand, Divided We Fall’. He also released ‘Street Code’ with Pat Lowrenzo. The same year, he released a promotional track ‘Bad Ass (Advance)’ for ‘Bad Azz’. He also signed a deal with Warner Bros. Records the same year.
Trill released ‘Bad Ass Mixtape Vol.1’ in 2006 as a follow-up to ‘Bad Ass Advance’. His major label debut album ‘Bad Azz’ was also released. In ‘Bad Azz’ DVD, that followed shortly, he explained the death of his father due to drugs, and his fight against diabetes. The same year, the mixtapes ‘Streetz Iz Mine and ‘DJ Drama (Gangsta Grillz)’ were released.
In 2007, he released ‘Bad Azz Mixtapes Vol. 2’ with Webbie. In 2008, Boosie released ‘Da Beginning Mixtape’, and his mixtape, ‘4th Of July Bash’. In 2009, he released his second major album ‘Superbad: The Return of Boosie Bad Azz’.
Continue Reading Below
In 2010, while he was in the prison for drug possession, ‘Unbreakable,’ as a Compilation CD with C-Loc was released. It was followed by ‘Incarcerated’, his next album. ‘Gone Til' was also released in 2010, which is a mixtape album consisting of new music. In 2011, Quick released ‘Hit After Hit 3’ with Boosie.
In 2014, after he was released from prison, he signed a record deal with Atlantic Records. His first single ‘Show Da World’ with Webbie was released. He was featured on ‘Beat Up the Block’ by Dorrough Music, ‘Wuda Cuda Shuda’ by 2 Chainz, ‘Face Down’ by DJ Mustard, and many others, one after the other.
In October 2014, he released his mixtape ‘Life After Deathrow’. In April 2015, his sixth studio album ‘Touchdown 2 Cause Hell’ was released. It features 17 new tracks.
As of July 2017, Boosie is trying his hand at some serious acting, and has landed a role in the indie boxing film, ‘Glass Jaw’. He plays the role of a street savvy underground fight club operator. He already has some acting experience as he had starred in some films earlier, like ‘Gangsta Musik’, and ‘Last Dayz and Ghetto Stories: The Movie’, where he played a small-time drug dealer.
Major Works
Boosie Badazz founded Bad Azz Entertainment, a record label, in 2008. That year, he released ‘Lil Boosie Presents: Da Click’, which features ‘Da Click (Hatch Boy, Locco, Quick and Bleek)’. He also featured on the single ‘Independent’ by Webbie, and was featured on ‘Out Here Grindin’ by DJ Khaled.
His latest business venture is his clothing line—Jewel House—that was launched in 2014, after he was out from prison. It did a business worth $4 million in eight months. The name of the clothing line comes from his belief that his family members are his jewels.
Controversies & Scandals
On October 22, 2008, Lil Boosie was arrested after marijuana and a gun were found in his car. He was sentenced to two years in prison. Soon after, his sentence was doubled after it was found the he violated probation while awaiting sentencing. Between his plea and sentencing, he was placed under house arrest.
On June 17, 2010 he was indicted with charges of first-degree murder of Terry Boyd. He also faced charges for possession of narcotics. Prosecutors believed that he might have been involved in at least five other murders.
On November 29, 2011, he was sentenced to eight years in state prison for drug charges. But in 2012, a jury found him not guilty of the first-degree murder. As a result, he was released on March 5, 2014, and is on parole until 2018.
On October 20, 2014, Lil Boosie officially changed his name to Boosie Badazz. After coming out from prison he did several hours of community service which was a part of his sentence.
Personal Life
Boosie Badazz has a total of eight children from different mothers. He says he wants to have more kids.
He suffers from various health issues, including diabetes. On November 25, 2015, he announced via social media that he was diagnosed with kidney cancer. Later he had successful surgery to remove the cancer.

See the events in life of Torrence Hatch in Chronological Order