(Best Known for His Role of 'Thomas Magnum' in the TV Series 'Magnum, P.I.')

Thomas William "Tom" Selleck is an actor made famous by his portrayal of the private investigator Thomas Magnum in the television series, Magnum, P.I., with his serious looks, stern demeanor and the trademark moustache, he makes a good choice to play cops and investigators roles he had often been offered to portray. Keeping up with his image, he played the Police Chief Jesse Stone in a series of television movies based on Robert B. Parker novels. The talented actor had been in show business for long before he actually got noticed. He had appeared in minor roles in a number of films and television productions before Magnum, P.I., happened and made him a household name. After that role he began receiving more substantial parts in television series and films and landed a role in the movie Three Men, and a Baby which went on to become a huge commercial hit. Acting seemed to be an unlikely profession for the athletic basketball player who majored in business administration. He took up acting on the advice of a drama coach. Starting from small roles he eventually rose to become the award winning, much sought after actor that he is today. A sportsman during his younger years, he is also an accomplished beach volleyball player. American People
T V & Movie Producers
American Men
Michigan Actors
University Of Southern California
Childhood & Early Life
He is the son of Martha Jagger and Robert Dean Selleck. His father was an executive and real estate investor while his mother was a housewife. He has three siblings.
He went to Grant High School from where he graduated in 1962.
He was of athletic built and played several sports. He earned a basketball scholarship to attend the University of Southern California. He majored in business administration.
He also used to model and was advised by his drama coach to try his hand at acting. He then took up acting at the Beverly Hills Playhouse under Milton Katselas. 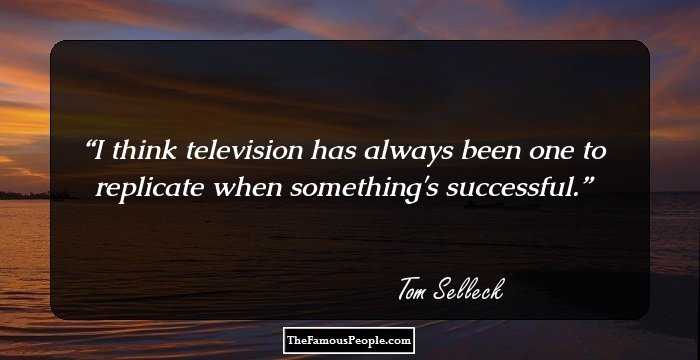 Continue Reading Below
Career
He began his acting career playing small role in television series. He appeared as a college senior on the show, The Dating Game in 1965, a role he reprised in 1967. He also started acting in commercials during his initial days he would grab on to any work he could get his hands on.
All through the 1970s he found employment playing minor roles in films and television productions like The Movie Murderer (1970), Owen Marshall: Counselor at Law (1973), Charlies Angels (1976), and The Sacketts (1979).
In spite of his good looks, impressive physique and acting skills, the talented actors career was not moving forward the way he would have wanted it to; even after working for years, he primarily remained unnoticed. This changed when he was offered a role in the television series, Magnum, P.I.
He played Thomas Magnum, a private investigator, in the television series, Magnum, P.I.. The series which was broadcast on the CBS network from 1980 to 1988 was a big hit, and one of the highest rated shows on U.S. television.
His movie career also took off following his success as a television actor. He appeared along with Steve Guttenberg and Ted Danson in the comedy film, Three Men and a Baby in 1987. The film was one of the biggest hits of the year.
He played Dr. Richard Burke in 10 episodes of the television sitcom Friends from 1996 to 2000. His performance was much loved by the critics as well as the audience even though his role was just a guest appearance. He was nominated for Primetime Emmy Award for Outstanding Guest Actor in a Comedy Series.
In 1997 he acted in the romantic comedy In & Out which also starred Kevin Kline, Joan Cusack, and Matt Dillon. The movie was inspired by Tom Hankss speech at the 1994 Oscar Awards ceremony regarding the wonderful gay men he had met.
He starred as a successful advertising agency executive in the television sitcom, The Closer. He appeared in 10 episodes of the show that aired on CBS in 1998.
During 2007-08, he appeared as A.J. Cooper in the television series Las Vegas. The show focused on a group of casino employees who dealt with issues arising within the working environment.
Along side Kathy Baker he appeared in the television mystery film Jesse Stone: Sea Change in 2007. The movie was based on a novel by Robert Parker and revolved around a police chief who investigates an unsolved murder. He reprized his role of Jesse Stone in other movies in the series too.
Starting form 2010 he has been starring in the police drama series Blue Bloods as Frank Reagan. The series follows the life and works of a family of police officers with the New York City Police Department. 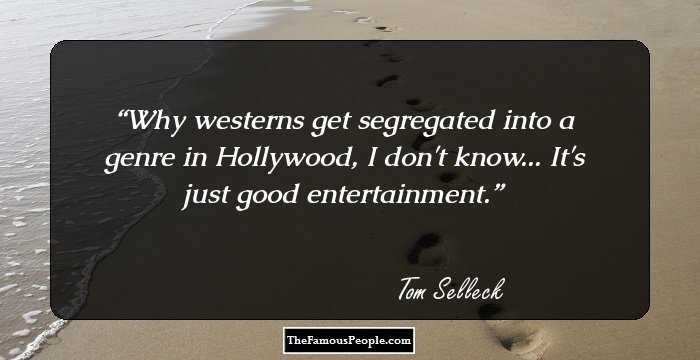 Major Works
He is best known as the private investigator Thomas Magnum from the series Magnum, P.I. which he portrayed for eight years. This show made him a recognized actor and also won him critical appraisal and awards.
Awards & Achievements
Selleck won Primetime Emmy Award for Outstanding Lead Actor in a Drama Series in 1984 for his portrayal of the title character Thomas Magnum in the television series Magnum, P.I. 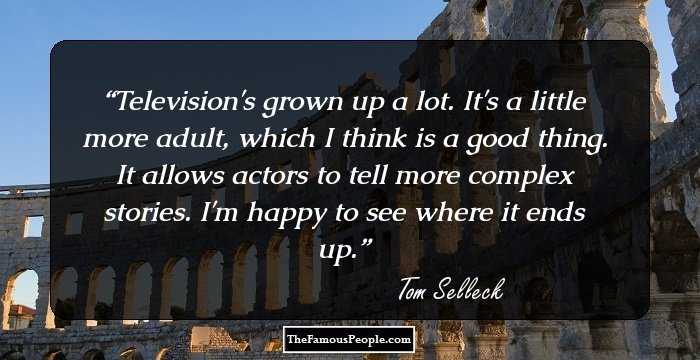 Personal Life & Legacy
He married model Jacqueline Ray in 1971 and adopted her son. The couple divorced in 1982. His second marriage was to Jillie Mack in 1987. The couple has one daughter.

Quotes By Tom Selleck | Quote Of The Day | Top 100 Quotes

See the events in life of Tom Selleck in Chronological Order