Tom Goodman-Hill is an actor from England who is widely known for his extensive film, television, radio, and stage works. A London native, he worked as a teacher before becoming a professional actor. He grew up in Newcastle, where he often performed in amateur productions at the People's Theatre. After obtaining a BA in drama and English with a teaching qualification from the University of Warwick, he served as a supply teacher in Coventry before relocating to London to become an actor. Goodman-Hill started his career on stage before making his screen debut in an uncredited role in an episode of the TV series ‘Coasting’ in 1990. His first cinematic appearance came in the 1996 historical period drama film ‘In Love and War’. In his nearly three-decade-long acting career, he has accumulated over a hundred film and TV credits. He has voiced several characters on various radio productions and continues to perform on stage. In 2007, Goodman-Hill was nominated for a Laurence Olivier Award for the Best Performance in a Supporting Role in a Musical for his outing as Sir Lancelot in the London production of ‘SPAMalot’. 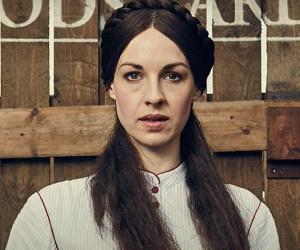 Benedict Cumber...
Actors #3816
Film & Theater Personalities #8384
DID WE MISS SOMEONE?
CLICK HERE AND TELL US
WE'LL MAKE SURE
THEY'RE HERE A.S.A.P
Quick Facts

British People
University Of Warwick
Tall Celebrities
Tall Male Celebrities
Gemini Actors
Childhood & Early Life
Tom Goodman-Hill was born Tom Hill on May 21, 1968, in Enfield, London, UK. Through his father, he is a descendant of Lilburne's Uncle Joseph. He was raised near Newcastle upon Tyne, also known as Newcastle. During this period, he regularly took part in amateur performances at the People's Theatre.
He received a BA in drama and English with a teaching qualification from the University of Warwick, where he was actively involved in student drama. He subsequently worked as a supply teacher in Coventry for a year and then came to London to pursue his dreams of becoming an actor.
Continue Reading Below
You May Like

The Most Popular US Veterans
Stage Career
Tom Goodman-Hill got his start as an actor on stage and went on to star in the productions of ‘Pete and Dud: Come Again’, in which he played one of the two protagonists, Peter Cook, and ‘The Cosmonaut's Last Message to the Woman He Once Loved in the Former Soviet Union’, in which he essayed the role of Eric.
In the 2006 West End production of Monty Python’s ‘SPAMalot’, he portrayed Sir Lancelot and other characters (many of these roles were played by John Cleese in the original movie ‘Monty Python and the Holy Grail’), earning a Laurence Olivier Award nomination for the Best Performance in a Supporting Role in a Musical.
In 2009, he performed as Andrew Fastow, the real-life convicted felon and former CFO of Enron, in Lucy Prebble's ‘ENRON’ at Chichester and the Royal Court Theatre. In January 2010, the production was moved to the Noël Coward Theatre. In the intermediate period, in December 2009, Goodman-Hill substituted Mark Gatiss in 'Darker Shores' at the Hampstead Theatre.
He has also appeared in the West End productions ‘Death and the Maiden’ in 2011 and ‘The Effect’ in 2012.
Television Career
After making his TV debut in an episode of ‘Coasting’ in 1990, Goodman-Hill was cast as Max in the 2000 miniseries ‘Border Cafe’. Later that year, he appeared in another miniseries ‘A Dinner of Herbs’. In 2008, he was part of the main cast of the short-lived BBC Two sitcom ‘Never Better’.
He has also been featured in TV miniseries like ‘The Devil’s Whore’ (2008), ‘Residue’ (2015), and ‘The Secret Agent’ (2016). Between 2005 and 2011, he played PC or Phil Collins in the BBC Three dark comedy series ‘Ideal’.
He worked with Jeremy Piven, Amanda Abbington, Ron Cook, and Grégory Fitoussi in the ITV (UK) and PBS (US) period drama series ‘Mr Selfridge’ (2013-16). He has also played important roles in the Channel 4/AMC sci-fi drama series ‘Humans’ (2015-18) and ITV thriller-drama series ‘Cheat’ (2019).
Film Career
In his first film, Richard Attenborough’s ‘In Love and War’ (1996), Goodman-Hill shared the screen space with Sandra Bullock, Chris O'Donnell, and Mackenzie Astin.
In 2009, he was cast in the historical drama film ‘Glorious 39’, which is set in the weeks leading up to the World War II. He played Wihelm Warner in another film set in the same era, writer-director Amma Asante’s ‘Where Hands Reach’ (2018).
Goodman-Hill is set is to star in the upcoming films ‘100 Feet Below Hell’, ‘Rebecca’, ‘The Visitor’, and ‘Clay Kickers’.
Radio Career
Tom Goodman-Hill has enjoyed a long collaboration with BBC Radio 4, for whom he has lent his voice to characters like Jesus in ‘Witness: Five Plays from the Gospel of Luke’; Anton in ‘The House of Milton Jones’, ‘Another Case of Milton Jones’, and ‘Thanks a Lot, Milton Jones!’; Ron, the security guard, in ‘Self-Storage’; Archie in three series of ‘Hut 33’; and Claudius in ‘I, Claudius’.
Family & Personal Life
Tom Goodman-Hill has been married twice in his life. His first wife is a woman named Kerry Bradley, with whom he has two children. In 2013, it came to light that he and Bradley had parted ways and he was dating actress Jessica Raine. They met while working together in the 2010 National Theatre's production of ‘Earthquakes in London’. On September 1, 2015, the couple exchanged wedding vows. They have a child together.