Thucydides was a 5th century BC Greek historian and a famous general who is often regarded as “the father of scientific history.” He wrote ‘History of the Peloponnesian War’ which recounts the struggles between Athens and Sparta in the 5th century BC. Even today, many experts believe that Thucydides' work was the first-ever recorded political and moral analysis of any nation’s war policies. He only gave accounts of wars that happened in his own time, unlike his predecessor Herodotus who also wrote about ancient Greek history. While writing about the wars, Thucydides had focused more on the testimonies of eyewitnesses. Being a general during the war also helped him write a first-person account of it, as he had been taking notes from the very beginning. Many historians have noted that although Thucydides tried to remain objective in his writing, he often wrote based on his personal judgment. For instance, in his work on the “Plague of Athens,” his account slowly develops into a story on moral corruption. According to modern historians, his writings on people like Pericles, Cleon and Nicias are hardly accurate. Nonetheless, his work ‘History of the Peloponnesian War’ is considered to be one of the greatest texts from antiquity.
Continue Reading Below

Greek People
Greek Men
Greek Historians
Greek Intellectuals & Academics
Childhood & Early Life
Thucydides was born in an Athenian suburb in circa 460 BC. His father Olorus is believed to be from the Athenian deme of Halimous. His family hailed from Thrace in northeastern Greece. The name of his father, “Olorus,” was connected to Thracian royalty. He was also related to the great Athenian General Miltiades.
Thucydides owned gold mines in his hometown and that is how he managed to finance his historical works. When the plague of 430 BC struck, he was in Athens. This was just a year after the war had begun. 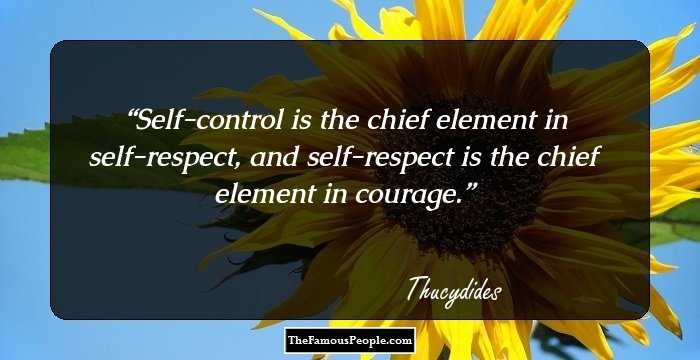 Famous Beautiful Women With Green Eyes
Later Years
Thucydides wrote ‘History of the Peloponnesian War’ between 431-404 BC. During the Plague of Athens in 430 BC, Thucydides caught the disease himself but somehow survived.
In 424 BC, he was elected to be one of the ten “stratēgoi” of the year. He was the leader of the fleet in the Thraceward region, based at Thasos. Spartan General Brasidas took complete control over Amphipolis after Thucydides failed. This eventually led to an attack and Thucydides was sentenced to exile.
His exile eventually paved the way for him to focus more on his writings and travels, especially on the Peloponnesian side comprised of Sparta and its allies.
As a historian, he broke down his work into three definable stages. First, he made “notes” of events as they occurred. This was followed by rewriting these notes into a consecutive narrative as a “chronicle." Finally, he would create an elaborate narrative of the preliminaries of the events.
He was exiled for nearly 20 years and it ended only with the fall of Athens and the conclusion of the Peloponnesian War in 404 BC. 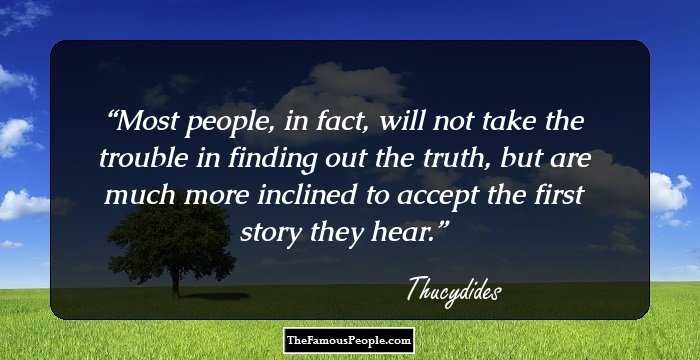 Quotes: Will
Death & Legacy
It is believed that Thucydides died around 404 BC. Even until the 2nd century AD, his tomb and a monument were present in Athens. Thucydides' ‘History’ was later divided into eight books containing everything about the 27-year-long war between Athens and Sparta. The subdivision was created by librarians and archivists who worked in the Library of Alexandria.
It took many centuries for Thucydides to be called one of the greatest historians of all time. Interestingly, Aristotle, who was born a few years after Thucydides’ death, also wrote about the same era.
By the start of the first century BC, writers like Cicero recognized Thucydides as a great historian. Many copies of his works were created, ensuring its survival over the next centuries.
Even political philosophers like Thomas Hobbes and Friedrich Nietzsche heaped praises on Thucydides’ vision and how he wrote about politics and warfare.
You May Like

Quotes By Thucydides | Quote Of The Day | Top 100 Quotes

See the events in life of Thucydides in Chronological Order