(The Father of History)
Advanced Search

Herodotus was a Greek historian widely referred to as 'The Father of History'. He lived in the fifth century BC and was a contemporary of Socrates. A major figure in Greek history, he was the first historian known to have broken from Homeric tradition to treat historical subjects as a method of investigation. He collected his materials systematically and critically, and then proceeded to arrange them into a historiographic narrative. Even though he is known to have produced only one work, ‘The Histories’, a record of his "inquiry" on the origins of the Greco-Persian Wars, this single work is regarded as the first great narrative history produced in the ancient world. He was believed to be a wide traveler, wandering over a large part of the Persian Empire, covering Egypt and Elephantine, and also visited numerous other places like Libya, Syria, Babylonia, Susa in Elam, Lydia, and Phrygia. He spent several years of his life exploring far away kingdoms and empires, and gained extensive experience and knowledge. One of the Herodotus’ remarkable features was that he narrated history in a storyteller’s manner, often inserting amusing anecdotes and interesting dialogues. Even though some of his accounts are believed to be inaccurate, he remains the leading source of original information of Greek history for the period between 550 and 479 BC. Greek People
Greek Men
Childhood & Early Life
Not much is known about Herodotus' life. Scholars often turn to his own writing for information about his life. He is believed to have been born at Halicarnassus around 484 BC.
According to some sources, he was the son of Lyxes and Dryo, and the brother of Theodorus, and was also related to Panyassis, an epic poet of the time. His family was an influential one.
His writings reveal love for the island of Samos which is taken as an indication that he might have lived there in his youth. There is a chance that his family was involved in an uprising against Lygdamis, leading to a period of exile on Samos. The family, influential as it was, might have even had a personal hand in the tyrant's eventual fall. 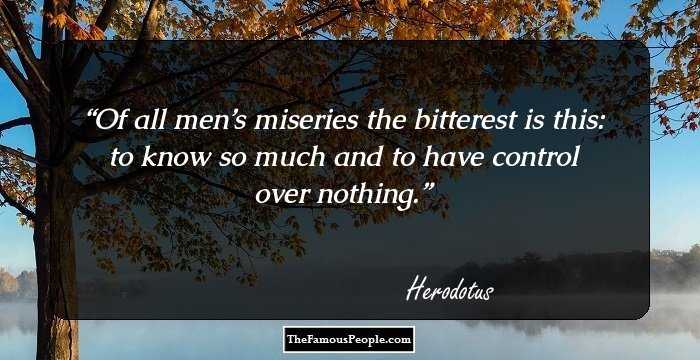 The Best Black Actresses Of All Time
Later Years
Herodotus probably began travelling as a young man. He went to Egypt sometime after 454 BC or possibly earlier. According to his eye-witness accounts, he might have been associated with Athenians.
He is believed to have travelled next to Tyre and then down the Euphrates to Babylon. During this time he became involved in local politics which made him unpopular in Halicarnassus. So he migrated to Periclean Athens, a city known for its democratic institutions, in 447 BC. There he became acquainted with leading citizens such as the Alcmaeonids clan.
He soon became a respected citizen in the region and was granted a financial reward by the Athenian assembly in recognition of his work. He migrated to Thurium as part of an Athenian-sponsored colony in 443 BC, or shortly afterwards.
He visited many places over his lifetime. In addition to Egypt, he also visited Libya, Syria, Babylonia, Susa in Elam, Lydia, and Phrygia. He also travelled up the Hellespont (now Dardanelles) to Byzantium and went to Thrace and Macedonia. In addition he journeyed along the northern shores of the Black Sea as far as the Don River and some way inland.
He was a prolific writer, best known for ‘The Histories’, his narrative on the Greco-Persian Wars. The work is believed to have taken several years of his later life though it is not known when, where, or in what order it was written. It is probable that he began working on it much earlier in life though it was completed only during his last years.
His seminal work covers the wars between Greece and Persia (499–479 BC) and their preliminaries. ‘The Histories’ is divided into nine books, each describing a different aspect of the wars. The work also contains considerable material on the description of geography, social structure, and history of the Persian Empire.
Even though he is acclaimed as an important Greek historian, the accuracy of his works has been controversial since his own era. Several prominent personalities like Cicero, Aristotle, Josephus, Duris of Samos and Plutarch have commented on this controversy. However, modern historians and philosophers generally take a more positive view. 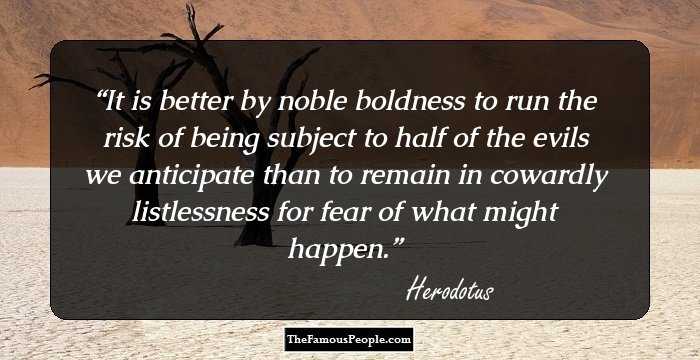 Quotes: Fear
Major Works
Herodotus’ ‘The Histories’ is now considered the founding work of history in Western literature. The seminal work is a record of the ancient traditions, politics, geography, and clashes of various cultures that were known in Western Asia, Northern Africa and Greece at that time. The work is also credited to have established the genre and study of history in the Western world.
Personal Life & Legacy
A wide traveler, he was blessed with an eye for detail. He had a keen interest in learning about the customs and rituals of the regions he visited, and the history of his fellow citizens. He was also a great story teller who wrote his treatises in a narrative, easy to read style. He is believed to have died around 425 BC in Thurii, Calabria or Pella, Macedon. 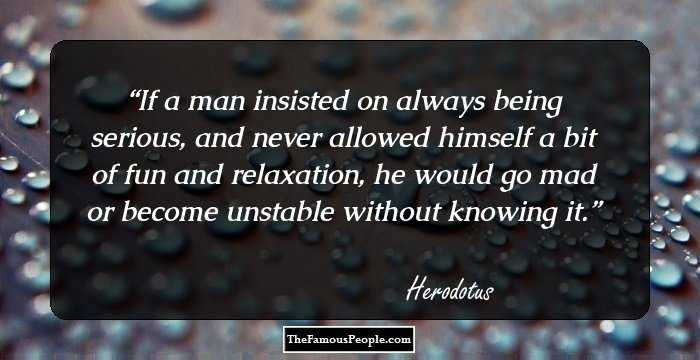 Quotes By Herodotus | Quote Of The Day | Top 100 Quotes

See the events in life of Herodotus in Chronological Order