Thomas Petrou is an American YouTuber. Currently running a channel called 'PetrouTV', he is known for publishing vlogs on varied topics. From festive and travel time stories to couple and reaction videos, his channel has everything for entertainment lovers. Petrou, who is friends with well-known YouTubers like Jake Paul, Erika Costell, and Tessa Brooks, also publishes collaborative videos with them. A dropout from New York University, Petrou has been passionate about making films, modeling, and acting since his college days. It was to pursue these passions that he decided to abandon his engineering course. After leaving college, he has been filming his everyday life and sharing it with the world. Also a former model with a great sense of style, the YouTuber designs clothing which he sells online. His merchandise has been received positively by his fans. Whenever Petrou is not shooting or designing merchandise, he spends quality time with his lady love. He also likes to be active on other social platforms like Instagram and Twitter. Trevor Michael ...
2nd September In History
DID WE MISS SOMEONE?
CLICK HERE AND TELL US
WE'LL MAKE SURE
THEY'RE HERE A.S.A.P
Quick Facts

American People
Virgo Youtubers
Male Youtubers
American Vloggers
American YouTubers
Rise to Stardom
At the age of 13, Thomas Petrou created a Vine account under the username ‘The Petrous,’ along with his cousins. However, one of them got into some trouble, forcing Petrou to switch to YouTube instead. Petrou created his channel 'PetrouTV' in 2015. Till date, he has shared numerous vlogs on this channel. Apart from vlogs, he has also published a number of reaction videos, such as 'Reacting To Jake Paul's New Tattoo’ and ‘Reacting To Chad Tepper’s Song "NADA", to name a few. Apart from these, there are tons of couple videos available on the YouTuber’s channel that he has created alongside his girlfriend Kayla.
Recommended Lists:

Virgo Men
In addition, Petrou has posted loads of videos with his friends and fellow YouTubers Jake Paul, Erika Costell, and Tessa Brooks. Coming to the popularity of the channel, it has over 172k subscribers as of September 2018. One of the recent videos posted by Petrou is 'Reacting To Chitty Bank by Erika Costell ft Jake Paul’. This video is a fun, reaction-based video.
Continue Reading Below
Personal Life
Thomas Petrou was born on September 2, 1998 in the United States. Information about the YouTuber’s parents is missing from the web. He studied engineering at New York University but dropped out before completing his degree. His initial vlogs were about his college application process. As a teenager, he was also active in the modeling field.
He has been in a relationship with Kayla Pimentel since 2014. The YouTuber has collaborated several times with his lady love in his videos. Some of these videos are 'Girlfriend Does My Makeup’, 'Exposing My Girlfriend On Her Birthday’ and ‘Lets Have A Baby Prank On Girlfriend’. 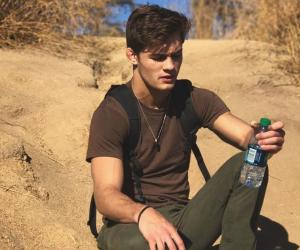