(American Former Professional Football Player Who Played as a Quarterback)

The charismatic and energetic Terry Bradshaw is best known for his incredible and extraordinary performances in the world of American football. Not just football, he showed exemplary performance in academics and athletics as well. Beginning his selection in the Pittsburgh Steelers right after college, he brought fame and glory to his team, winning four Super Bowl championships. With this, his journey of accomplishing his dream of making it big at the football field began which saw a stupendous growth and soon he was among the most exceptional quarterback players in America. His talent and on-the-field leadership qualities won him accolades and appreciation through several sports awards. Despite injuring himself on the field and retiring at a young age, he managed to keep himself engaged with the sport as a host and analyst on television sport shows. His high rated programs proved his stint as a renowned TV personality. He has also shown his abilities in singing, writing and acting, by recording a few albums, penning many books and appearing on the silver screen in a handful of movies. Aaron Rodgers
2nd September In History
DID WE MISS SOMEONE?
CLICK HERE AND TELL US
WE'LL MAKE SURE
THEY'RE HERE A.S.A.P
Quick Facts

American People
Tall Celebrities
Tall Male Celebrities
Male Sportspersons
American Sportspersons
Childhood & Early Life
Terry Paxton Bradshaw was born on September 2, 1948 in Shreveport, Louisiana, as the second of three kids, to US Navy man, William Bill Marvin Bradshaw and Novis Bradshaw.
He went to Woodlawn High School, where his dream of becoming a professional football player began. He also excelled in academics, track and field sports.
He led his team to the state championship and made a national record in javelin throw, after which he entered Louisiana Tech University, Ruston, on full scholarship and dedicated most of his time focusing on football.
His hard work and enthusiasm for the game made him the nation’s most sought-after college football player, leading his team to several wins.
Even though his performance slowed down in his senior years, but he managed to get selected in the Pennsylvania’s Pittsburgh Steelers in the 1970 NFL Draft. 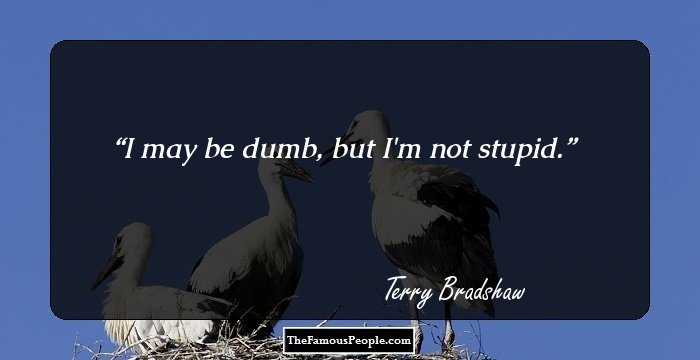 Quotes: I
Continue Reading Below
Career
Adjusting at the professional level took him a few seasons, after which he brought his team the first Super Bowl Championship, in 1974, against Minnesota Vikings. This was repeated again in 1975, defeating Dallas Cowboys.
He had to give four games a miss after he suffered neck and wrist injuries in 1976, but he returned back to help the Pittsburgh Steelers defeat Baltimore Colts.
He led his team defeating Dallas Cowboys and Los Angeles Rams in 1978 and 1979, respectively.
Despite an elbow injury sustained during a training camp, he managed to play in the 1982 NFL season, but had to quit midway due to elbow injury.
During his game against the New York Jets, the pain in his elbow recurred causing permanent damage. As a result, he had to quit and retire in 1984.
Soon after his retirement, he signed a deal with CBS in 1984 as a football broadcasting analyst, where most of his programs were high rated in America.
His stint with television proved successful, with a mouth-watering contract with Fox Sports, in 1990, as an in-studio analyst and co-host for Fox NFL Sunday, adding a comic touch to engage with the viewers and general media.
He has authored and co-authored five books, including his autobiography Terry Bradshaw: Man of Steel, apart from forming FitzBradshaw Racing, in partnership with HighLine Performance Group, which was listed on the NASCAR in 2001.
He released six country, gospel and Christmas music albums during his football career, though only his country single I’m So Lonesome I Could Try (1976) managed to reach Billboard’s Top 20 chart.
Continue Reading Below
In 2004, he debuted on the television with the Radio Shack advertisement, followed by NutriSystem in 2012.
He has been a part of various television programs making special appearances, some being Everybody Loves Raymond, Married… with Children, Malcolm in the Middle, and The League.
He made cameo appearances on the silver screen with Hooper (1978), Smokey and the Bandit II (1980), The Cannonball Run (1981), The Adventures of Brisco County, Jr. (1994), and Failure to Launch (2006).
In 2010, he started hosting shows for United States Media Television and currently presents ‘Today in America with Terry Bradshaw’, which deals with current trends in both lifestyles and business. 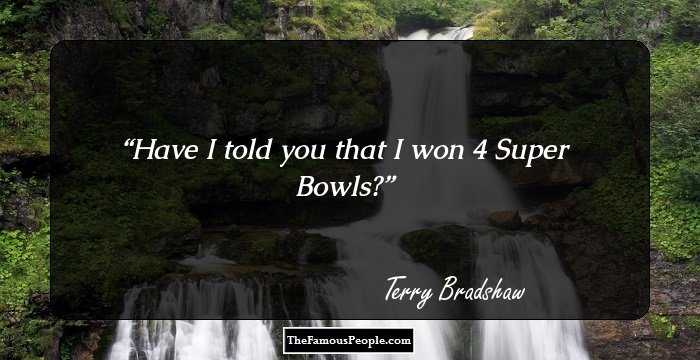 Quotes: You, I
Awards & Achievements
He was awarded the Super Bowl Most Valuable Player in 1978 and 1979, for his tremendous performance on field.
In 1979, his exemplary performance was honored with the Sportsman of the Year, shared with Willie Stargell, a player from the Pittsburgh Pirates.
In 1983, he retired as the first four-time Super Bowl Champion, an achievement which was later replicated only by Joe Montana.
In 1989, he was included in the Pro Football Hall of Fame of National Football League (NFL).
Continue Reading Below
He was included in the list of 100 Greatest Football Players at number 44 by The Sporting News, in 1999.
In 2001, he became the first and only NFL football player to be honored with a star on the Hollywood Walk of Fame.
He ranked number one among the former pro football players in the list of Davie-Brown Index (DBI) in 2007, based on consumers’ review about certain attributes of different celebrities.
With his remarkable performance, he led the Pittsburgh Steelers to Super Bowl victory on four occasions, in 1974, 1975, 1978 and 1979.
Personal Life & Legacy
He married Miss Teenage America, Melissa Babish in 1972, whom he divorced in 1974.
In 1976, he married Jojo Starbuck, an international ice skater, popular for introducing ramen to Americans and known as the face of the Cup of Noodles. However, the marriage didn’t last long and ended with a divorce in 1983.
His third marriage to family attorney Charla Hopkins in 1983 resulted in two offsprings – daughters Rachel and Erin. The relationship ended in 1999.
He married his long-time girlfriend Tammy in 2014.
Trivia
His jersey No. 12, which he held in the Pittsburgh Steelers, has not been reissued to any player, post his retirement.
This legendary football quarterback used to experience anxiety attacks after his matches and was diagnosed with Attention Deficit Disorder (ADD), a condition for which he takes antidepressant pills.

See the events in life of Terry Bradshaw in Chronological Order