Terrell Owens, popularly known by his initials T.O. is a former football player who served as a wide receiver in the National Football League (NFL) for 15 seasons. A highly talented player, he is as well known for his on-field performances as he is for his controversies. He is considered to be one of the best skilled wide receivers in football history and had been selected for the Pro Bowl six times. He holds several unbroken records in NFL. Owens started playing football at the college level and was selected by the San Francisco 49ers for whom he played his first professional match. Over the next many years he went on to play for several other teams like Philadelphia Eagles, Dallas Cowboys, Buffalo Bills and Seattle Seahawks. He was an explosive wide receiver with exceptional speed and agility. He changed the fortunes of the teams he played for with his amazing performances. He is especially famous for his touchdown celebrations which have sometimes been so exuberant that he had been fined for them. Equally notorious are his spats with the coaches and unruly on-field behaviour. Often known to spar with his team executives and even his team mates, he is notorious for his temper and callousness. In spite of being highly popular his image is marred as a result of the innumerable controversies surrounding him. education: University of Tennessee at Chattanooga

American People
Tall Celebrities
Tall Male Celebrities
Male Sportspersons
American Sportspersons
Childhood & Early Life
Terrell Owens is the son of LC Russel and Marilyn Heard. His parents split when he was very young and he was primarily raised by his mother and grandmother. He has three siblings.
He loved sports, especially football as a child and idolized the footballer Jerry Rice.
He attended Benjamin Russell High School where he participated in several sports including football, baseball, and basketball.
He enrolled at the University of Tennessee and got the chance to play at the 1995 NCAA Basketball Tournament. He also took part in the Senior Bowl in preparation for the NFL Draft. 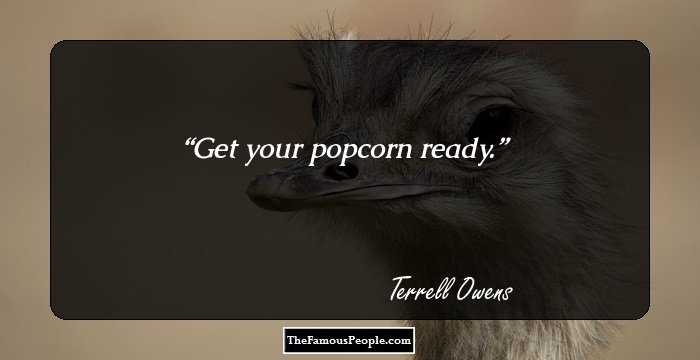 The Sexiest Men Of 2020, Ranked
Career
He was selected by San Francisco 49ers during the 1996 NFL Draft. He played his first professional game against the New Orleans Saints.
He had a great season during 1997 when he along with quarterback Steve Young helped the team to win 13 games. Owens finished the season with 936 receiving yards and eight touchdowns.
The year 2000 was highly productive for him. He ended the year with 1,451 receiving yards and thirteen touchdowns. He had a very remarkable game that year against the Chicago Bears in which he took 20 catches for 283 yards.
He helped the 49ers manage a 12-4 record during 2001. He finished the year with 16 touchdown catches and 1,412 receiving yards. The next season he helped the team win the NFC West title.
The San Francisco 49ers began facing some problems by 2003 and the coach Steve Mariucci was fired. The team had a bad season and Owens decided to leave. He soon signed an agreement with the Philadelphia Eagles.
He had a great start with the Eagles and garnered a big fan following within months of joining the team. However he sustained a severe ankle injury in December 2004 which threatened to prevent him from playing for months. But he courageously returned to the game sooner than expected.
He started having spats and heated arguments with a fellow team mate and his relations with the Eagles became strained. Owens was even suspended for four months in the wake of his controversial behaviour. He was released form the team in March 2006.
He signed with the Dallas Cowboys and played his first match for them against the Jacksonville Jaguars. He scored 8 receptions for 80 yards and one touchdown in the game and led the Cowboys to victory.
He made a new record in November 2007 with four touchdown catches against the Washington Redskins. He finished the season with 81 receptions, 15 touchdowns, and 1,355 receiving yards and helped his team finish 13-3.
Continue Reading Below
After being released from the Cowboys in 2009 he signed a contract with the Buffalo Bills. He debuted for the team with 2 catches for 25 yards in a match against New England Patriots. He had a great time with the Buffalo and made many records.
He signed a one-year contract with the Cincinnati Bengals in July 2010. He played a terrific game against the Cleveland Browns with 10 receptions, 222 yards and a touchdown of 78 yards.
He was offered a contract by Allen Wranglers to play for them during the 2012 season. He played eight matches for them with 35 catches in 420 yards. He was released from the team in May 2012. 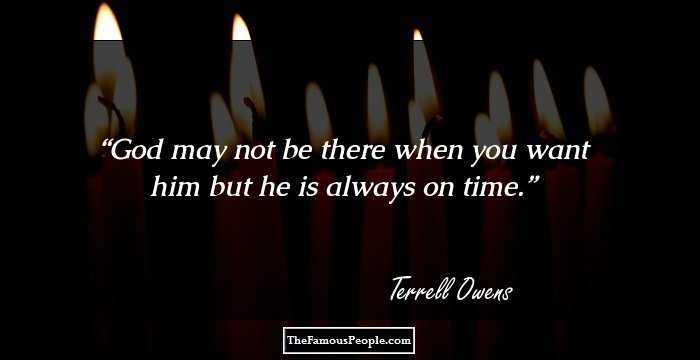 Quotes: You, God, Time
Major Works
He was one of the most talented ever wide receivers in the history of American football. He has a record of 1000 catches, six Pro Bowl appearances, and was the first player to score a touchdown in seven straight ‘Monday Night Football’ games.
Personal Life & Legacy
He has been involved with many women; he is the father of several children through his relationships with numerous women. Many of the mothers of his children have accused him of not paying enough child support.
He suffered several injuries during his sports career and had to undergo difficult treatment routines. Ever resilient, he always bounced back to his form sooner than expected.
He was very notorious for his fights with his team managers and fellow players. His volatile temperament was well-known among his peers.
Awards & Achievements
He is the only player in the history of NFL to score a receiving touchdown against all 32 NFL teams and also the only one to have scored a touchdown against all these teams.
He holds the record for having at least 6 or more touchdowns in 11 consecutive seasons.
Trivia
He rapped in a single titled ‘I’m Back’.
He has a breakfast cereal named after him.
You May Like

See the events in life of Terrell Owens in Chronological Order