(Canadian Actress Known for Her Films: ‘The Heart Still Hums’, ‘Waves’ and ‘Bones & All’)

Advanced Search
Taylor Russell is a Canadian actress, best known for her powerful performance as ‘Judy Robinson’ in the science-fiction 'Lost in Space.' Taylor’s habit of daydreaming while growing up nurtured her creativity, which she later utilized in her acting career. Taylor began her acting career in 2012, and has been active in the film and television industry since then. She had a lead role in the thriller 'Escape Room' and had significant roles in TV productions, 'Falling Skies' and 'The Unauthorized Saved by the Bell Story.' Amybeth McNulty
18th July In History
DID WE MISS SOMEONE?
CLICK HERE AND TELL US
WE'LL MAKE SURE
THEY'RE HERE A.S.A.P
Quick Facts

Canadian People
Black Film & Theater Personalities
Canadian Women
Cancer Actresses
Canadian Actresses
Childhood & Early Life
Taylor was born Taylor Russell McKenzie on born July 18, 1994, in Vancouver, Canada. She spent some initial years of her life in her birthplace and later moved to Toronto. Taylor has two siblings.
Growing up in Vancouver, a city with a majority population of Caucasians, made it difficult for Taylor to mix. However, her struggles of fitting-in did not end even after moving to Toronto, a city with lots of blacks and people of mixed ethnicity.
Since Taylor is half-black and half-Caucasian, she could not mix up with either of the races. She had to deal with a lot of identity issues back then. Taylor was raised mainly by her mother's family.
Continue Reading Below
Career
Taylor began her career in 2012 with a brief role in an episode of 'The CW' medical drama 'Emily Owens, M.D.' She was cast as ‘Jessica,’ starring along with Madeline Carroll in an unsold television pilot of 'Blink' for 'CBS.' She made her transition from the small to the big-screen with the 2013 film 'If I Had Wings' in which she played the role of ‘Amy Conrad.’
In 2014, Taylor portrayed American actress, singer, spokeswoman, and model ‘Lark Voorhies’ in the 'Lifetime' TV movie 'The Unauthorized Saved by the Bell Story.' She next played ‘Jennifer’ in the 'Disney XD' original movie 'Pants on Fire.'
Taylor was cast as ‘Cassie’ in two episodes of the 'CBS' drama 'Strange Empire' (2015) and as ‘Evelyn’ in five episodes of the 'TNT' post-apocalyptic science fiction drama 'Falling Skies.' She starred as ‘Carrie’ in the horror-thriller movie 'Dead of Night' (original title 'Suspension').
Taylor once again appeared in a horror project in 2016, when she starred as ‘Laura’ in an episode of the 'Freeform' supernatural horror 'Dead of Summer.' The following year, she appeared as ‘Ashley’ in the teen drama 'Before I Fall.' Taylor starred as ‘CeCe’ in the TV movie 'Sea Change,' which was based on Aimee Friedman’s best-selling novel of the same name.
Taylor was seen in her breakthrough role in 2018, playing the role of Judy Robinson, a strong-willed and confident mission doctor, who had received accelerated medical training, in the 'Netflix' original drama 'Lost in Space.' The web series is a modern take on the classic 1960s version of the science fiction series.
In 'Lost in Space,' Taylor brilliantly portrayed one of the Robinsons, a family set in the colonization in space which has been selected to make a new life for themselves in a better world. She was considered for best supporting 'Saturn Award,' in 2019, for this role.
In 2018, Taylor was seen as ‘Ashley’ in the American-Spanish supernatural horror film 'Down a Dark Hall.' She appeared as the lead, ‘Zoey,’ a physics student, who along with others, are invited to take part in the titular game of 'Escape Room.' This psychological horror mystery film released in 2019
Taylor will be seen in the upcoming movies 'Waves' and 'Words on Bathroom Walls.'
Family & Personal Life
As a child, she was dramatic and daydreaming. Taylor would talk to imaginary people for hours and that scared her mother to the core. In her school, too, she would always get in trouble for daydreaming in the class.
Taylor is a voracious reader.

See the events in life of Taylor Russell in Chronological Order 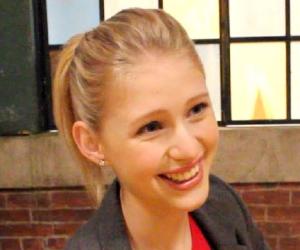