Advanced Search
Suzette Quintanilla is an American musician who played the drums and percussion, and provided backing vocals for the family band 'Selena y Los Dinos' (Selena and the Guys), in which her late sister, Selena, popularly known as 'the Queen of Tejano music', performed until her murder on March 31, 1995. She ended her musical career following her sister's death. She is currently involved with her father's Latin entertainment company Q-Productions, Inc., and manages the Selena Museum in Corpus Christi, Texas. Along with her family members, she attended her sister's posthumous star ceremony on the Hollywood Walk of Fame on November 3, 2017 in Los Angeles, California, where she also addressed the crowd. The same year, she attended the event unveiling the wax figure of Selena at Madame Tussauds Museum in New York. On April 6, 2019, she attended a meet-and-greet at North Star Mall in San Antonio, Texas, hosted by popular fashion brand, Forever 21, which launched a line of clothing inspired by Selena. Her character was played by Mexican-American actress Jackie Guerra in the Jennifer Lopez-starrer 1997 biopic 'Selena'. With her father, she is one of the executive producers of the upcoming Netflix biographical drama, 'Selena: The Series', in which Mexican-American actress Noemi Gonzalez is scheduled to portray her. Marcella Samora
DID WE MISS SOMEONE?
CLICK HERE AND TELL US
WE'LL MAKE SURE
THEY'RE HERE A.S.A.P
Quick Facts

American People
Texas Musicians
Cancer Drummers
Female Drummers
Cancer Musicians
Rise to Stardom
Suzette Quintanilla, as well as her siblings, inherited a passion for music from their father Abraham Quintanilla Jr., who played with the band 'Los Dinos'. In 1980, a teenaged Suzette Quintanilla began performing with her siblings after her father opened his first Tex-Mex restaurant, Papa Gayo's, in Lake Jackson, Texas. She played drums, while her brother, Abraham III, played bass guitar and her sister, Selena, provided vocals. However, the restaurant was forced to close the following year after a recession caused by the 1980s oil glut and the family declared bankruptcy. They were evicted from their home and settled in Corpus Christi, Texas, where they began performing on street corners, weddings, quinceañeras, and fairs to support the family financially.
Her father formed the band 'Selena y Los Dinos' and later refurbished an old bus, 'Big Bertha', to use it as their tour bus. While they initially struggled to earn enough money to run the car, the popularity of the band grew, and they were signed for a record deal with Freddie Records. They gained mainstream popularity following the release of their full-length album 'Selena y Los Dinos - Mis Primeras Grabaciones' in 1984. Their third album, 'Munequito De Trapo' (Rag Doll), was promoted and showcased in the 'Tejano Music Awards', where Selena won the first of her eight consecutive 'Female Vocalist of The Year' awards. The band went on to release three more albums, 'And The Winner Is...' (1987), 'Preciosa' (Precious, 1988), and 'Dulce Amor' (Sweet Love, 1988), before Selena was signed as a solo artist by EMI Latin. Suzette continued to perform with her siblings in the family band until Selena's untimely death in 1995.
Recommended Lists:

Women Musicians
American Drummers
American Musicians
American Female Drummers
Continue Reading Below
Protecting Selena's Legacy
While Suzette Quintanilla stopped playing music professionally following the tragic death of her sister Selena, she has been actively protecting and spreading the legacy of her late sister ever since. She often attends various events in the memory of her younger sister and meets with her fans. On behalf of her father's company, Q-Productions, Inc., she manages the Selena Museum, which showcases a collection designs and mementos of Selena, including items from her wardrobe to her favorite childhood toys. She is also involved in charity work through 'The Selena Foundation', which was formed by her family soon after Selena's death and assists children in crisis. In an interview with 'POPSUGAR', she mentioned that the siblings used to spend a lot of time in their tour bus, and that she used to have sisterly chats with Selena on their bunk after late night gigs.
Recommended Lists:

American Female Musicians
Cancer Women
Family & Personal Life
Suzette 'Suzy' Quintanilla was born on June 29, 1967 in Lake Jackson, Texas, United States, to Abraham Quintanilla Jr. and Marcella Ofelia Samora. Her father is a Mexican-American singer-songwriter and record producer who had encouraged his children to play music. She is the middle child of her parents and has an older brother named A.B. Quintanilla III and had a younger sister named Selena, both of whom grew up to become successful musicians and singers. She and her siblings were raised as Jehovah's Witness. The siblings began performing at various local events, and after the family experienced a financial crisis, they began performing professionally as well.
She married her longtime boyfriend Bill Arriaga in 1993. The couple has a son named Jovan, born in 1998. They often share pictures with each other on social media. They celebrated their 25th wedding anniversary in 2018, following which she also shared a picture with her husband on her Instagram profile. 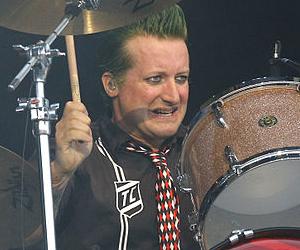