Steve Earle is one of the most recognized names in the American music industry. With over three decades of experience in music, he is today the leading musician of the country and a protégé of legendary songwriters Townes Van Zandt and Guy Clark. He popularized the genre of folk and country music and kick-started the neo-traditionalist movement in country music. What is interesting to note is that Steve Earle never completely conformed to the rules of country or rock music and instead derived a music that broke through the mainstream of both the genres. Remarkably, he successfully derived a cult following from both country and rock music fans. Earle’s music career kick started in 1982, as a songwriter in Nashville. During this time, he released his first EP. His first debut album released was ‘Guitar Town’ in 1986. Though drugs and personal problems derailed his career for some time, he bounced back with a revived energy and enthusiasm. Till date, he has fourteen studio albums to his credit, fourteen Grammy nominations and three Grammy awards. His songs have been recorded by the likes of Travis Tritt, Vince Gill, Shawn Colvin and Emmylou Harris. Other than music, he has appeared in films and television, written a novel, a play, and a book of short stories. American People
Guitarists
Rock Musicians
Lyricists & Songwriters
Country Musicians
Childhood & Early Life
Steve Earle was born to Jack and Barbara Thomas Earle in Fort Monroe, Virginia. His father was an air traffic controller by profession. He had four siblings.
He spent much of his growing up years in San Antonio, Texas. Musically inclined since young, he first got hands on his guitar at the age of 11. Within two years, he had mastered the stringed device, emerging third at a school contest.
Inspired by legendary folk-rock musicians Townes Van Zandt, Guy Clark and Woody Guthrie, he dropped out of school at the age of 16 and moved to Houston with his uncle who was also a musician.It was at Houston that he finally met his idol, Van Zandt who became his role model. 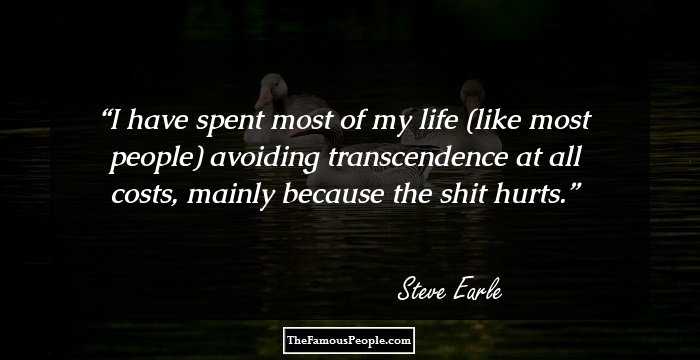 Who Is The Greatest Female Warrior In History?
Career
In 1974, he moved to Nashville, Tennessee. He took up various odd jobs during the day to survive a living, while at night dedicated his time to playing music. He even wrote songs and played bass guitar in Guy Clark’s album, “Old No 1’.
In 1975, he made a cameo appearance in the film, ‘Heartworn Highways’. He even found employment as a staff songwriter for a publishing company called Sunbury Dunbar.
He momentarily returned to Texas and immediately set up a band, ‘The Dukes’. However, his time in Texas was a short-lived one as he moved back to Nashville and started working as a songwriter for the publishers Roy Dea and Pat Clark
His song ‘Mustang Wine’, originally written for Elvis Presley was finally sung by Carl Perkins. Later on, he co-wrote a song with John Scott Sherrill, ‘When You Fall in Love’, which was recorded by Johnny Lee. It made it to the number 14 position on the country charts.
In 1982, he released an EP, ‘Pink & Black’. The following year, the EP was sent to Epic Records, who signed a contract with Earle. In 1983, he signed a record deal with CBS as well, and recorded a ‘neo-rockabilly album’.
Once he had fulfilled the ties with Epic Records, he signed a seven record deal with MCA Records. In 1986, he released his first full length album, titled ‘Guitar Town’. The album was a major commercial hit and garnered positive reviews. It also earned him two Grammy nominations.
After the flying success of his debut album, he released a compilation of earlier recordings titled, ‘Early Tracks’ in 1987 and an album with Dukes titled, ‘Exit 0’. While ‘Early Track’ received positive reviews, ‘Exit 0’ earned him his third and fourth Grammy nominations.
In 1989, he released his next album, ‘Copperhead Road’. Much unlike his previous music explorations, this album had a strong inclination towards rock. It did average business in the US, while in the UK it was better marketed and received.
‘The Hard Way’ album followed in 1990 which further propelled his venture into the world of rock music. The album had a strong rock music and was followed up by a live album in 1991, titled ‘Shut Up And Die Like An Aviator’. It was also co-incidentally the last album of his contract with MCA Records.
Continue Reading Below
Following the end of his contract with MCA, he underwent a period of creative drought. He did not record even a single track thus disappearing from the scene completely.
In 1994, Barbara Behler, John Dotson and Mark Brown released a compilation of his unreleased and unrecorded songs, in an in-house CD titled, ‘Uncut Gems’. The songs were later recorded by prominent artists of Nashville.
The music hiatus finally ended in 1995 when ‘Train’ A Comin’ was released. The album marked his return to folk music, much like his earlier days in music. It was positively received and gained him his fifth Grammy nomination.
In 1996, he formed his own record label, ‘E-Squared Records’ and released the album, ‘I Feel Alight’. The album was unique in terms of its composition as it had traits of country, rock and rockabilly music.
‘El Corazon’ marked his next programmed release in 1997. The album was released on his own record label and earned him his sixth Grammy nomination. Critics even declared the album as the ‘capstone’ of his comeback.
Year 1999 was a time of exploration and experimentation as he made a foray into bluegrass influenced music with the album, ‘The Mountain’ with Del McCoury Band. Despite it being his first ever attempt into the genre, the album was well received and earned him his seventh Grammy nomination.
The new millennium opened on a strong note for this talented musician and he released the album, ‘Transcendental Blues’ that had mix of bluegrass, rock and Irish music. The album won him his eight Grammy nomination.
In 2002, he released the album, ‘Jerusalem’, which openly expressed his leftist views and anti-war and anti-death penalty sentiments. The following year, he released a live album ‘Just an American Boy’
In 2004, he released the album, ‘The Revolution Starts Now’, which had a collection of songs influenced by the Iraq war and the policies of the George W. Bush administration. It finally earned him his first Grammy Award in the category of Best Contemporary Folk Album.
Continue Reading Below
From 2004 to 2007, he hosted a radio show on Air America. Meanwhile in 2006, he contributed for a cover of Randy Newman's song ‘Rednecks’.
In 2007, he released his twelfth studio album, ‘Washington Square Serenade’. The album was the first which featured his use of digital audio recording. It also won him his second Grammy in Best Contemporary Folk Album.
In 2009, he released a tribute album, ‘Townes’. The album featured 15 songs written by Townes Van Zandt. The album was commercially and critically well received and helped him bag his third Grammy award in the category of Best Contemporary Folk Album.
In 2011, he turned a writer with the release of his first novel and fourteenth studio album, both with the same title ‘I'll Never Get Out Of This World Alive’. 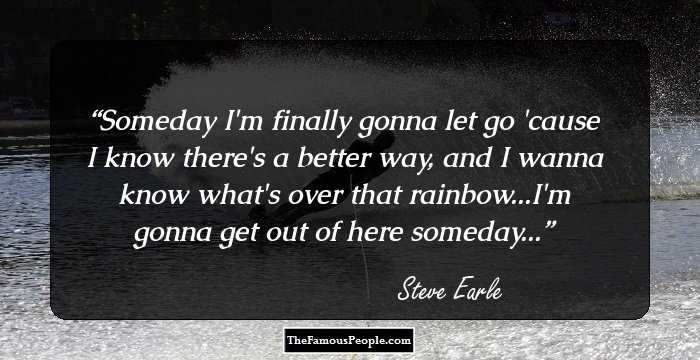 Quotes: I
Awards & Achievements
Till date, he has received fourteen Grammy nominations in various categories out of which he has won three in the category of Best Contemporary Folk Album for, ‘The Revolution Starts Now’, ‘Washington Square Serenade’ and ‘Townes’
In 1986, he was named Country Artist of the Year by Rolling Stone magazine.
The UK’s BBC Radio 2 awarded him with the Lifetime Achievement Award for song-writing in 2004.
In 2010, he was awarded the National Coalition to Abolish the Death Penalty's Shining Star of Abolition award. The same year, he even won a nomination for an Emmy Award in the Music and Lyrics category, for the song ‘This City’, which was written for the television series Trem�.
In 2011, he was granted honorary degree from the City University of New York (CUNY) School of Law.
Personal Life & Legacy
He has tied the knot seven times, out of which twice was to the same woman. His wives include, Sandra "Sandy" Henderson, Cynthia Dunn, Carol-Ann Hunter, Lou-Anne Gill, Teresa Ensenat, Lou-Anne Gill and finally to Allison Moorer.
Out of his marriage to Carol-Ann Hunter, Lou-Anne Gill and Allison Moorer, he has fathered three children.
In 1993 and 1994, he was arrested for possession of heroin, cocaine and weapon and sentenced to jail for a year. He then went into a rehab centre where he completed his treatment program.
A political activist, he has time and again voiced his opinion against capital punishment, which he considers to be his primary area of political activism. 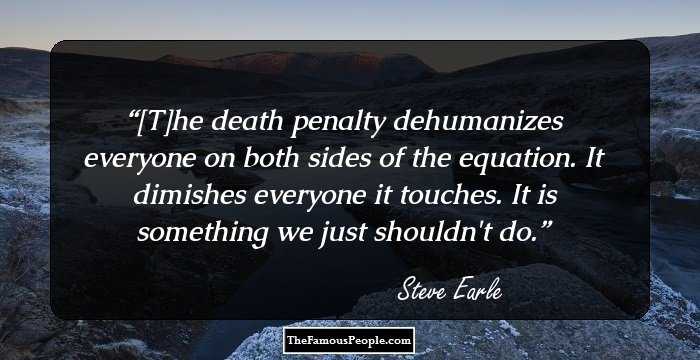 Quotes: Death
Trivia
A multiple Grammy Award winning singer-songwriter, he appeared on the HBO series ‘The Wire’ and ‘Treme’.

See the events in life of Steve Earle in Chronological Order