Steve Bannon is an American political strategist, filmmaker, media executive, and former investment banker, best known for his stint as the ‘White House’ chief strategist during the first 7 months of President Donald Trump’s tenure. Born and raised in Norfolk, Virginia, he graduated from the ‘Benedictine College Preparatory School.’ He later studied urban planning from the ‘Virginia Tech College of Architecture and Urban Studies.’ He served in the navy, and after his discharge from the forces, he joined ‘Harvard Business School’ and completed his MBA. He then began working as an investment banker, and in the 1990s, he moved to Hollywood and worked as an executive producer for several films and documentaries. His right-wing ideology was promoted through ‘Breitbart News,’ a far-right news network, of which Steve was a founding member in the late 2000s. In August 2016, he was appointed as the CEO of Donald Trump’s election campaign by Trump himself. After Donald Trump became the president, Steve served him as his chief strategist and senior counselor. His continued working in Trump’s administration for the first 7 months of his term. He is an extreme right-winger and supports the extreme right populist conservative movements in many countries. 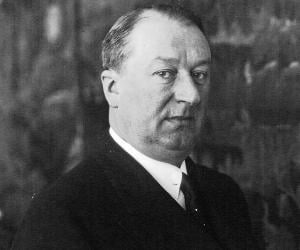 Ettore Bugatti
DID WE MISS SOMEONE?
CLICK HERE AND TELL US
WE'LL MAKE SURE
THEY'RE HERE A.S.A.P
Quick Facts

American People
Georgetown University
Harvard Business School
Sagittarius Men
Childhood & Early Life
Steve Bannon was born Stephen Kevin Bannon, on November 27, 1953, in Norfolk, Virginia, U.S., to Martin and Doris Bannon. His was a working-class family. His father worked as a middle manager and a telephone lineman. His mother was a housewife. His parents were strict Christians.
He once described his pro-union Irish Catholic parents as hardcore ‘Democrats.’ Steve grew up as the middle child of the five siblings in the family.
He attended a boys’ Catholic military school during his childhood, named the ‘Benedictine College Preparatory,’ located in Richmond, Virginia. Following his high-school graduation, Steve joined the ‘Virginia Tech College of Architecture and Urban Studies’ in 1972.
However, by the time he graduated college, he had developed a strong political stand. During his junior year itself, he became the president of the student body. He had developed a strong right-wing sentiment by then.
In 1976, he graduated with a bachelor’s degree in urban planning from ‘Virginia Tech.’ Following this, he joined the American navy and served as an auxiliary engineer. At the same time, he joined ‘Georgetown University,’ where he attended night classes to complete his master’s degree in national security studies.
Later, in the early 1980s, he joined ‘Harvard Business School’ and pursued a master’s degree in business administration. He was an excellent student and completed his MBA with distinction.
Continue Reading Below
You May Like

The Hottest Male Celebrities With The Best Abs
Career
After obtaining his MBA, he began working with ‘Goldman Sachs,’ a world-renowned investment bank and financial services company. He worked as an investment banker in the acquisitions and mergers department of the company.
Toward the late 1980s, the company eyed Hollywood and started expanding their reach, eventually venturing into the media industry. Steve moved to Los Angeles and was made a vice president of the company before he left it 2 years later.
Steve gathered a few employees from ‘Goldman Sachs’ and laid the foundation of a separate investment and banking company named ‘Bannon & Co.’ He then began working as an advisor to a production house and bought stakes in the hit sitcom ‘Seinfeld,’ which turned out to be a massively successful deal.
In the 1990s, after finding out that the entertainment industry was highly profitable, Steve moved to Los Angeles and began working as an executive producer. In 1991, he produced his first film, ‘The Indian Runner,’ which turned out to be a box-office disaster. In 1999, he produced another film, ‘Titus.’
In the 2000s, he began directing films, too. In 2004, he made a documentary film titled ‘In the Face of Evil,’ which was based on former U.S. president Ronald Reagan. Following this, he got involved in the funding and production of several films, such as ‘Occupy Unmasked’ and ‘The Undefeated.’
In 2007, he exhibited his far-right sentiments in the documentary film titled ‘Destroying the Great Satan: The Rise of Islamic Fascism in America.’ It was a highly controversial film that demeaned Jews and Muslims and accused many media and government agencies of helping in the establishment of an Islamic nation.
He has also served as a vice president in ‘Cambridge Analytica.’ The firm came under scrutiny after the 2016 U.S. presidential election result, as it was charged with stealing data to entice the American voters. The Mercer family co-owned the company. It was the same family that had founded ‘Breitbart News,’ a far-right media organization.
‘Breitbart News’ was started in 2007, and Steve was one of the co-founders of the company. It is a right-wing media organization that consistently targets the liberals, progressives, and ‘Democrats.’ Ever since its inception, the portal has been criticized for being extremely racist, sexist, and anti-LGBT.
In 2016, Steve further confirmed that ‘Breitbart News’ was an alt-right media organization. Under his leadership, the portal had become more nationalist in its approach.
Continue Reading Below
Ever since he took over as an executive chairman of the organization in 2012, ‘Breitbart’ became increasingly alt-right and published several propaganda pieces on immigration laws and other issues. The portal consistently featured highly inflammatory headlines to attract views, and its comment box was almost always full of comments from white nationalists.
In 2015, Steve began hosting a radio show, focusing on alt-right sentiments. The show, named ‘Breitbart News Daily,’ had Donald Trump as one of its regular guests. Back then, he was in the early stages of his presidential nomination. It was through this show that he built a friendship with Trump.
In August 2016, it was officially announced that Steve would serve as the chief executive officer of Donald Trump’s presidential campaign. He carefully strategized plans, which included instilling fear in the minds of the public about border-related issues and creating a general distrust of Trump’s opponent, Hillary Clinton. Trump’s populist message was enhanced, and he ended up winning in November 2016.
In the beginning of Trump’s term as the president, Steve served as his senior counsel. It is said that he was the brain behind Trump’s boldest policies, such as banning immigrants from seven Muslim countries. Trump also created a new position in his cabinet, exclusively for Steve, known as the “chief strategist.”
In January 2017, he was appointed as a member of the senior committee in the ‘National Security Council.’ However, he was removed from the position in April that year.
Nevertheless, he maintained his support for Donald Trump and declared that the mainstream American media was acting as an opposition party and criticizing every move of Trump. However, he had several clashes with other cabinet members and members of the Trump family, over many issues. In August 2017, he resigned from the position of the chief strategist of the ‘White House’ and the senior consultant to the president.
On the same day, ‘Breitbart News’ made an official announcement saying Steve would be joining the organization again. He then declared in the editorial meeting that he was ready to go against anybody who was against Trump.
In 2018, a controversial book titled ‘Fire and Fury: Inside the Trump White House’ was released, and this caused an issue between Steve and Trump. The book featured many controversial statements that were attributed to Steve. Steve tried to mend things with Trump, but it was of no use. He was later fired from the position of the executive chairman of ‘Breitbart.’ However, he continued working with the organization.
Family & Personal Life
Steve Bannon was initially married to Cathleen Houff Jordan. After his divorce from her, he married Mary Piccard in 1995. His second marriage also ended in a divorce in 1997. He then married Diane Clohesy in 2006, but they divorced in 2009. He has three daughters from his first two marriages.
Steve has faced several charges of domestic violence and misdemeanor. In 1996, his second wife, Piccard, filed a case against Steve, but she did not appear in court. Thus, the case was dismissed. She later claimed that she had received threat calls.
You May Like

See the events in life of Steve Bannon in Chronological Order