(English Actor, Writer and Director Known for His Films: ‘V for Vendetta’ and ‘A Fish Called Wanda’)

Stephen Fry is an English actor, author, poet, comedian, and television and radio presenter. He overcame a very distressful childhood and adolescence and went on to become a comedian during his days at Cambridge. He began his television career along with Hugh Laurie and Emma Thompson, all of whom made their mark in the film and television industry. His rapport with Laurie was excellent and soon they were viewed as a comedy double act. They not only acted out comedy skits, but wrote the scripts as well. He also presented many television documentary films on a wide range of topics. He has hosted quiz programs on television and radio. His acting was not restricted to comedy roles in television but also extended to films and dramas. He was noted for his treatment of literary cult classics. He also voiced many audio books, such as J.K. Rowling’s ‘Harry Potter’ series and many advertisements. He has written novels, several works of nonfiction, and three volumes of autobiography. He has been active on Twitter, reaching out to millions of followers in his inimitable style. He is an outspoken supporter of gay rights and Palestinian rights. He also promotes programs designed to create awareness about bipolar disorder. Stephen John Fry was born on 24 August 1957, in Hampstead, London, England, to Marianne Eve and Alan John Fry, an English physicist and inventor. Stephen, who was brought up in Norfolk, has an elder brother named Roger and a younger sister named Jo.

At 17, he was jailed for three months for stealing a credit card from a family friend. Whilst in ‘Pucklechurch Prison,’ his mother would pass on crosswords cut out from newspapers which kept him occupied.

After his release from the prison, he resumed studies at ‘City College,’ Norwich and earned a scholarship to ‘Queens' College,’ Cambridge. He pursued English literature and graduated with second class honors. 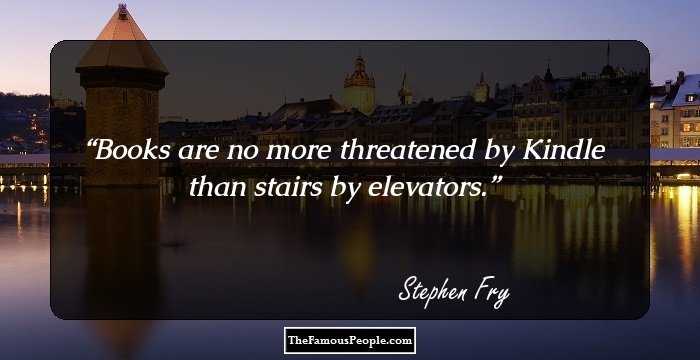 ‘Granada Television’ hired him along with Laurie and Thompson to star with Ben Elton in ‘There's Nothing to Worry About!’ He also appeared in many serials, such as ‘Alfresco,’ ‘The Young Ones,’ and ‘Happy Families.’

In the second half of the 1980s, he starred as ‘General Melchett’ in ‘Blackadder II’ and ‘Blackadder Goes Forth.’ In ‘Blackadder's Christmas Carol,’ he played the roles of ‘Lord Melchett’ and ‘Lord Frondo.’

From 1990 to 1993, he starred in ‘Jeeves and Wooster,’ which was adapted from the popular "Jeeves" stories. Fry portrayed ‘Jeeves,’ while Hugh Laurie played ‘Bertie Wooster.’

In 2003, he starred with John Bird in the BBC 2 television comedy serial, ‘Absolute Power.’ The serial is set in the offices of ‘Prentiss McCabe,’ a fictional public relations company in London.

He began hosting ‘QI (Quite Interesting),’ a comedy panel game television quiz show, in 2003. It was conceived and co-produced by John Lloyd and features comedian Alan Davies as a permanent panelist.

In July 2006, he narrated ‘The Story of Light Entertainment,’ a British documentary on BBC. The documentary consists of eight episodes, with each episode dedicated to a topic.

‘Stephen Fry in America,’ a six–part series for BBC in 2008, saw him travel mostly in a cab across the United States of America.

In 2011, ‘Channel 4’ featured ‘Stephen Fry's 100 Greatest Gadgets.’ A cigarette lighter, described by him as ‘fire with a flick,’ was chosen as the greatest gadget.

‘Fry’s Planet Word,’ a documentary series about languages, was written and presented by him. The five hour-long episodes were broadcast on two BBC channels in September and October 2011.

He lent his voice to an operetta titled ‘Paul Bunyan,’ which was composed by Benjamin Britten and staged at the ‘Wales Millennium Centre’ with the ‘Welsh National Youth Opera’ in August 2013.

The same year, he presented ‘Stephen Fry: Out There,’ a two part documentary on exploring the lives of homosexual people in different parts of the world. He was also featured as a guest in ‘Bear's Wild Weekends’ on ‘Channel 4.’

He was roped in to play ‘Master of Lake-town’ in ‘The Hobbit: The Desolation of Smaug’ in 2013 and ‘The Battle of the Five Armies’ in 2015. He also had a small part in the 2015 biographical movie ‘The Man Who Knew Infinity.’

In 2016, he had a guest role in ‘Yonderland.’ He then landed the lead role of ‘Roland’ in ‘The Great Indoors,’ which got canceled after a season. He has also appeared in other TV shows, such as ‘Neo Yokio,’ ‘Doctor Who,’ and ‘Sex Education.’

In 2018, he appeared on stage at ‘Shaw Festival in Mythos: A Trilogy,’ a stage version of his own book. Its European premiere took place the following year at the ‘Edinburgh International Festival.’

Fry has also lent his voice to many movies, including ‘Alice Through the Looking Glass,’ ‘Duck Duck Goose,’ and ‘Missing Link.’ In 2020, he was part of a British telethon titled ‘The Big Night In.’ The telethon was broadcast by BBC One to support those affected by the COVID-19 pandemic. More than £27.3 million was raised by the end of the program. 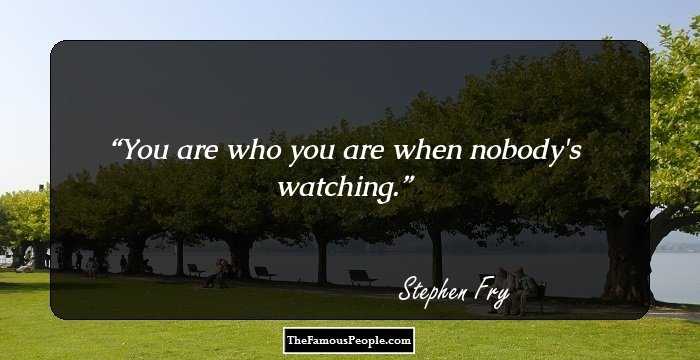 ‘A Bit of Fry & Laurie,’ a comedy television series written by Stephen Fry and Hugh Laurie was broadcast on BBC1 and BBC2 between 1989 and 1995. It ran for four series and earned great popularity.

‘Stephen Fry: The Secret Life of the Manic Depressive,’ a 2006 two-part television documentary, explored the effects of living with bipolar disorder. It was based on the experiences of people suffering from the disorder.

Between 1995 and 2011, Stephen Fry was presented with honorary doctorates from the Universities of Dundee and Sussex and an honorary degree from the ‘Anglia Ruskin University.’ He was also made an honorary fellow of ‘Cardiff University.’

In 2007, he was declared ‘Mind Champion of the Year.’ He also won the ‘British Academy Television Award’ for ‘Best Factual Series’ for his documentary ‘The Secret Life of a Manic Depressive.’

He was honored with a ‘Lifetime Achievement Award’ in Cultural Humanism by the ‘Harvard University’ in 2011. He also received the honorary Life membership at ‘Union of UEA Students’ in 2012. 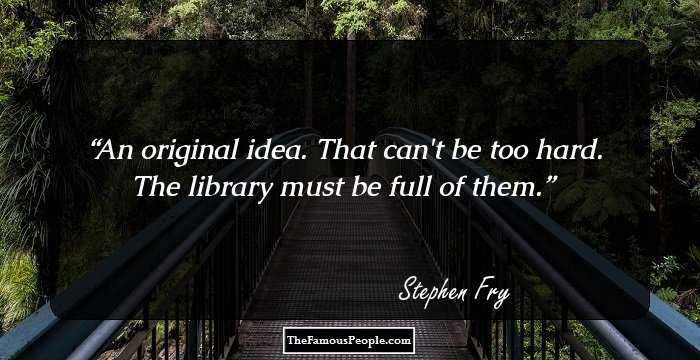 Initially, Stephen Fry tried to keep his sexuality a secret, but later became an outspoken supporter of gay rights. His services to humanism and gay rights have been recognized and honored.

In 2015, he got married to his partner and comedian Elliot G. Spencer. Previously, he was in a long-term relationship with Daniel Cohen.

He has shown keen interest in internet and owns many websites, such as ‘The New Adventures of Mr. Stephen Fry,’ which has attracted many visitors.

Fry was diagnosed with prostate cancer in 2018, and underwent a surgery for the same. He later said that the cancer was very aggressive and that detecting it early saved his life.

This famous actor is nicknamed in the UK as 'Britain's Favorite Teddy Bear.' He is a keen teddy bear collector and has presented a television documentary on bears.

He has been described as ‘deeply dippy for all things digital.’ He claims to have owned the second Macintosh sold in the UK.

Quotes By Stephen Fry | Quote Of The Day | Top 100 Quotes

See the events in life of Stephen Fry in Chronological Order