Stacey Weitzman is an American businesswoman and activist, best known as the wife of famous comedian and actor Henry Winkler. Winkler shot to fame for his portrayal of greaser Arthur 'Fonzie' Fonzarelli on the popular 1970s sitcom, Happy Days. Stacey owned a public relations firm before dabbling in acting in the television series, As Told by Ginger, and the drama film, The Touch. Previously, she worked as an intern in the casting department of the movie Safe (1995). While she usually avoids the limelight, she is often seen accompanying her husband to various events and while supporting his multiple projects. Stacey along with Winkler, who found that he was dyslexic quite late in life, has helped many children's programs through their production company. In 1990, they were among six couples, alongside Steven Spielberg and Kate Capshaw, who co-founded Children’s Action Network, which has helped provide free immunization to 175,000 children and is involved in a national adoption campaign. Stacey Weitzman initially wanted to become a fashion designer. After earning a degree in business from the University of North California, she opened her own fashion PR firm. It did not take very long for her firm to become very successful and get clients like ‘Van Cleef & Arpels’ and ‘Jag’. However, it was her relationship with actor and comedian Henry Winkler that attracted the media’s attention in the late 1970s. When they were dating, young Winkler told the press that he had found "someone who is intellectual enough to have her own life, and open enough to be in love with me." She subsequently began frequenting the Hollywood party scene with him and making headlines in entertainment magazines and tabloid articles. Despite being overwhelmed by his huge fan following, Stacey has stood by Winkler’s side for over 40 years.

Stacey Weitzman was born as Stacey Cooper Furstman on November 15, 1947 in Los Angeles, California, United States. Her mother was a nurse, while her father worked in a private office. In her youth, she wanted to study fashion designing in college, but she ended up studying economics and business at the University of North California at her father's suggestion. She also attended a dancing school when she was young.

Stacey Weitzman met entertainment lawyer Howard Weitzman in 1968, and the two began dating soon after. They got married on October 19, 1969 and welcomed son Jed Weitzman in 1971. However, the marriage ended in a divorce in 1976. Howard has worked as a legal consultant on a couple of television shows, in addition to a few acting credits. He got married to a woman named Margaret in 1981.

Stacey first met her second husband Henry Winkler in 1976 at Jerry Magnin’s clothing shop in Beverly Hills, Los Angeles, which was one of her public relations firm’s clients. He came to the store, looking for a sports coat and asked her for help, which she gladly offered. She was checking the accounts when someone told her that the Happy Days star was there, before introducing the duo. According to Winkler, it was love at first sight for him. Incidentally, when he came back to pick up the coat a week later, she was in the shop, and he asked her if she would like to have drinks together, following which the couple began dating.

Five months later, she moved in with him, bringing to his Hollywood Hills home her four-year-old son Jed, as well as her two Yorkies, Amanda and Percy. After two years of dating, the couple tied the knot on May 5, 1978 in the Manhattan synagogue where Winkler was bar mitzvah-ed. They went on to have two children together; their daughter Zoe Winkler was born in 1980, while son Max Daniel was born on August 18, 1983. Despite Winkler's international celebrity status, their children had a remarkably normal upbringing. Jed Weitzman grew up to be a music talent manager, Zoe Winkler became a pre-school teacher, and Max Winkler followed his father into the entertainment industry as a film & television director and screenwriter. Zoe is married to the actor, writer and producer, Rob Reinis. Stacey has five grandchildren. She and her husband love fly fishing.

Stacey Weitzman was diagnosed with breast cancer in 2001, shortly after her daughter Zoe went to college. Stacey was rushed to a hospital for tests, following which the doctors considered removing one of her breasts. She went through a lumpectomy and intensive chemotherapy, but the cancer came back after a few years. This time she underwent a double mastectomy and has been living cancer-free ever since. She and her husband now raise awareness about the importance of self-examination and mammograms for women over 45. 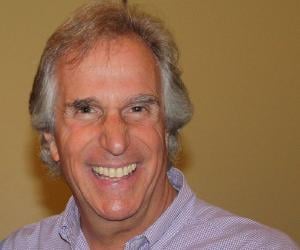