(One of the Greatest Actors of Hollywood's Golden Age)

Advanced Search
One of the most significant stars of the Golden Age of Hollywood, Spencer Tracy was a veteran actor who had appeared in over 70 films and had won two Academy Awards for the Best Actor out of a total of nine nominations. He enjoyed a long and productive career that spanned 37 years and gave hit movies like ‘Up the River’, ‘Captains Courageous’ and ‘Big City’. Ranked as one of the top ten Hollywood legends by the American Film Institute, Tracy was as much respected for his acting skills as he was famous for his charismatic personality. As a child he was hyperactive and a troublemaker who hated going to school; he was more interested in watching pictures than in learning. He discovered his love for acting while at college when he first took to stage. After years of initial struggle he established himself as a successful Broadway actor and was soon approached for appearing in motion films. His first few years as a film actor were uneventful and he rose to prominence only after the release of Fritz Lang’s ‘Fury’. He appeared in several other successful films over the next three decades and became one of the greatest actors Hollywood has ever seen. Tom Cruise
5th April In History
DID WE MISS SOMEONE?
CLICK HERE AND TELL US
WE'LL MAKE SURE
THEY'RE HERE A.S.A.P
Quick Facts

American Celebrities
Wisconsin Actors
American Academy Of Dramatic Arts
Aries Actors
American Actors
Childhood & Early Life
He was born to John Edward Tracy, a truck salesman, and Caroline Brown. He had one elder brother.
He was a hyperactive child who hated school. He loved watching motion pictures and would enact the scenes for his neighbors and friends.
He attended several Jesuit academies in his teenage and later went to Marquette Academy. He met aspiring actor Pat O’Brien and realized his love for theatre.
He enlisted in the Navy when he turned 18 and was sent to the Naval Training Station. He was discharged in 1919 without ever having been sent to the sea.
He entered Ripon College in 1921 with an intention to study medicine. He was a popular student who participated in a number of college activities. He was a member of the college debate team where he perfected his public speaking.
He won a scholarship to attend the American Academy of Dramatic Arts in 1922. He made his Broadway debut in a play called ‘R.U.R.’ and graduated from the academy in 1923. 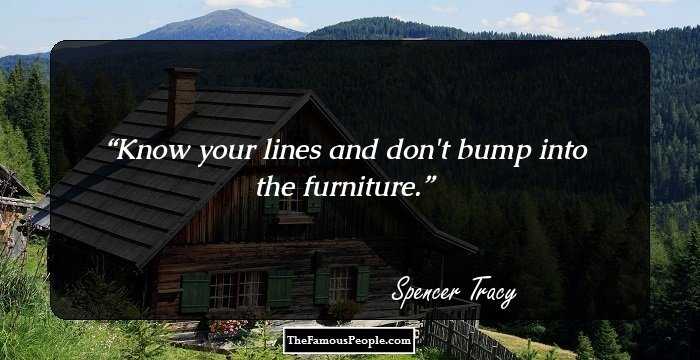 Continue Reading Below
Career
He struggled as a stage actor for the first few years after graduation. It was in 1926 that he was offered a role in a George M. Cohan play called ‘Yellow’ which ran for 135 performances. Cohan was impressed by the promising new actor and cast him in ‘The Baby Cyclone’ in 1927 which turned out to be a hit.
He was selected to play a serial killer in the play ‘The Last Mile’ in 1930. His performance was full of passion and intensity which was met by a standing ovation. The play was a big hit and ran for 289 performances.
During that time, famous Broadway actors were approached with offers of film roles and Tracy was also invited to join the movies. He made his film debut in 1930 in ‘Up the River’ which also marked the debut of Humphrey Bogart.
His initial years in the film industry were met with disappointments. Many of his films in spite of getting good reviews performed badly. Unable to cope with the failure of his films, he took to heavy drinking.
He signed a contract with Metro-Goldwyn-Mayer (MGM), the most respected movie production house of the 1930s. His first film with them was ‘The Murder Man’ in 1935.
The 1936 movie ‘Fury’ was a big breakthrough for him. He played a man who takes revenge on a group of people who had tried to kill him. The movie was critically acclaimed and also a commercial success.
It was quickly followed by the disaster movie ‘San Francisco’ in the same year, 1936. The movie was highly successful at the box office and established Tracy as a major star.
He was cast as a Portuguese fisherman in the adventure movie ‘Captains Courageous’ in 1937. His role was much appreciated and he was selected for another big budget movie ‘Big City’. By 1940 he was one of the most popular male stars in Hollywood.
He and Katharine Hepburn were paired together for the first time in 1942 in the movie ‘Woman of the Year’. Over the decade the on-screen pair were often cast together: ‘Without Love’ (1945), ‘Sea of Grass’ (1947), ‘State of the Union’ (1948), and ‘Adam's Rib’ (1949) .
Continue Reading Below
He began the decade of the 1950s with the hit movie ‘Father of the Bride’ in which he played the father of the character of Elizabeth Taylor who is preparing for her upcoming wedding. His other movies included ‘Broken Lance’ (1954), ‘Desk Set’ (1957), and ‘The Last Hurrah’ (1958).
He was a heavy drinker and smoker and his health was failing in the 1960s. His last film appearance was in ‘Guess Who's Coming to Dinner’ in 1967; he died within a few days of completing its filming. 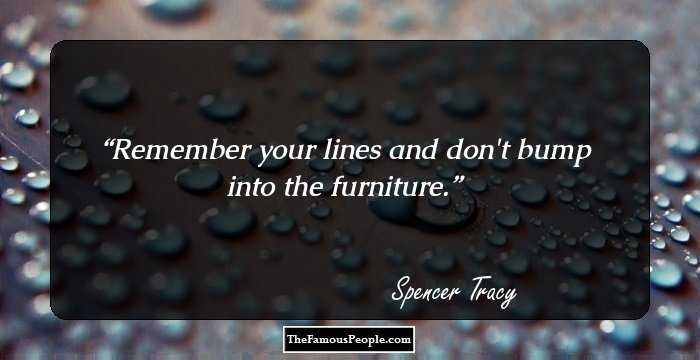 Major Works
With two Academy Award wins for the Best Actor, a career spanning almost four decades and appearances in 75 movies, Spencer Tracy was indeed one of the reigning kings of the Golden Age of American Cinema. ‘Captains Courageous’ and ‘Boys Town’ are among his finest works.
Awards & Achievements
He was nominated for Academy Awards for Best Actor nine times of which he won twice: ‘Captains Courageous’ (1938) and ‘Boys Town’ (1939).
He received five British Academy Film Award nominations for Best Actor in a Leading Role and won the award posthumously for ‘Guess Who's Coming to Dinner’ in 1968.
Personal Life & Legacy
He married actress Louise Treadwell in 1923. They had two children. Tracy and his wife became estranged during the 1930s though neither of them applied for divorce.
He began a relationship with the actress Katharine Hepburn in 1941. Their affair was the stuff Hollywood love legends are made of—Hepburn was fiercely devoted to him, but never pushed him for marriage. Their relationship lasted till Tracy’s death.
He suffered from a lot of health problems during his later years because of his smoking and alcoholism. Hepburn moved in with him to take care of him during his final years. He died in 1967 at the age of 67.
Trivia
He was called "one of the 20th century’s finest actors” by Film critic Leonard Maltin.

See the events in life of Spencer Tracy in Chronological Order