Sophie Dymoke is the wife of English actor Matthew Goode. She works in the fashion industry as a sales director. Dymoke started hogging the limelight when she began dating Matthew Goode in 2005. Dymoke and Goode dated for nine years before tying the knot in 2014. Dymoke has appeared in many public events and movie premieres along with her famous husband. In September 2014, Dymoke was at the ‘Toronto International Film Festival’ to attend the movie premiere of ‘The Imitation Game.’ In 2015, she was seen at the 67th ‘EE British Academy Film Awards’ at ‘Royal Opera House’ in London. Dymoke has also graced many red carpet events. She currently lives with her husband and three children. 40
DID WE MISS SOMEONE?
CLICK HERE AND TELL US
WE'LL MAKE SURE
THEY'RE HERE A.S.A.P
Quick Facts
Family:

education: The University of Wales 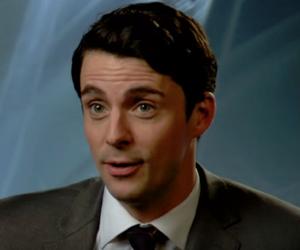 Lady Sarah Chatto
Early Life & Career
Sophie Dymoke attended ‘Sacred Heart School’ in Tunbridge Wells, Kent, England. After her high school education, she enrolled at ‘The University of Wales’ in 1991. She graduated from the ‘University of Wales’ in 1995 with a ‘Bachelor of Science’ degree in economics. She also studied history during her stay at the university. She started her career as an account executive for ‘The Donna Karan Company, LLC’ in London. In 2002, she moved to New York City to work for the popular clothing company ‘Alice and Olivia LLC.’ She worked for ‘Alice and Olivia’ as the head of sales from January 2002 to November 2004. She then started working as the sales manager for the Italian retail clothing company ‘Diesel.’ She quit ‘Diesel’ in May 2005 and began working as the sales director for ‘Vince.’ She quit ‘Vince’ in May 2008 and took a break for around four years. She returned to London and started working as the sales director for ‘MiH Jeans,’ which was founded by Chloe Lonsdale in 2005.
You May Like

Who Is The Most Popular BTS Member?
Continue Reading Below
Relationship with Matthew Goode
Sophie Dymoke met Matthew Goode when the latter was living in Clapham, London. Interestingly, Matthew Goode saw her standing on his doorstep as she was a friend of his neighbor. Dymoke and Goode were attracted to each other almost instantly. They started dating in 2005 but kept their relationship under wraps. After dating for a few months, Dymoke and Goode moved in together. Dymoke gave birth to their first daughter Matilda Eve Goode in March 2009. In September 2013, she gave birth to their second daughter, Teddie Eleanor Rose Goode. Dymoke and Goode got married in 2014. In August 2015, the couple was blessed with a son named Ralph Goode.
Sophie Dymoke has made many public appearances alongside Matthew Goode. She often attends red carpet events and movie premieres. In September 2009, she was seen at the 66th ‘Venice International Film Festival’ in Italy. Dymoke and Goode attended the film festival to watch the premiere of ‘A Single Man’ in which Goode played Jim. In October 2009, Dymoke and Goode were seen at the ‘BFI 53rd London Film Festival.’ In 2010, Dymoke attended the prestigious ‘Orange British Academy Film Awards’ (BAFTA) at the ‘Royal Opera House’ in London. Dymoke has attended other prestigious events, such as ‘The Moet British Independent Film Awards,’ ‘EE British Academy Film Awards,’ and movie premieres of several prominent films.
Family & Personal Life
Sophie Dymoke hardly talks about her personal life. She is not active on social media. However, she has a private Instagram account. Her pictures are seldom posted on her husband’s Instagram account. Dymoke makes sure her children stay out of the limelight. However, Dymoke and Goode’s oldest daughter, Matilda Eve Goode, has made a couple of public appearances along with her parents. Dymoke currently lives with her children and husband in London.