Skai Jackson
Sophia Grace Macy is an American actor, also famous as the elder daughter of noted actors William Hall Macy and Felicity Huffman. Her parents have received a “star” each on the ‘Hollywood Walk of Fame.’ Sophia followed in their footsteps into the entertainment industry and has appeared in some screen productions. These include the American sex comedy film ‘The Layover,’ directed by her father and starring Alexandra Daddario and Kate Upton among others. Sophia also accompanied her father to the 76th ‘Golden Globe Awards.’ Recently, she has garnered media attention for all the wrong reasons. Her mother, along with several other rich parents, was charged by the ‘Federal Bureau of Investigation’ (FBI) and the ‘US Attorney's Office’ for a 2019 college admissions bribery scandal. It was alleged that what apparently looked like a donation made to the ‘Key Worldwide Foundation’ by Felicity was actually a bribe given to a person who pretended to be Sophia, took the ‘SAT’ on her behalf, and ended up with a score much higher than Sophia’s score in the ‘Preliminary SAT’ (PSAT). Felicity was arrested with fraud and conspiracy and was later released on bail. She will be sentenced in September 2019.

California Actresses
Leo Actresses
American Actresses
Actresses Who Are In Their 20s
Rise to Fame
Born to celebrity parents, the world of glamor was nothing new to Sophia Grace Macy. Her father, American actor and director William Hall Macy, is known for his works in productions such as the 1996 black comedy–thriller ‘Fargo,’ which fetched him an ‘Academy Award’ nomination for the ‘Best Supporting Actor,’ and the American comedy–drama series ‘Shameless.’ The veteran actor has won two ‘Emmy Awards’ and four ‘Screen Actors Guild Awards.’ Sophia’s mother, Felicity Huffman, is also a noted American film, stage, and TV actor, well-recognized for portraying the leading role of ‘Lynette Scavo’ in the popular ‘ABC’ mystery comedy–drama series ‘Desperate Housewives.’ Felicity has received several awards, including a ‘Golden Globe Award,’ a ‘Primetime Emmy Award,’ and three ‘Screen Actors Guild Awards,’ apart from nominations for an ‘Academy Award’ and a ‘BAFTA Award.’ On March 7, 2012, Sophia’s parents received a “star” each on the ‘Hollywood Walk of Fame.’
Sophia entered the entertainment industry, following in the footsteps of her parents. She starred as ‘Lily,’ alongside Sophie Megaw and Iara Nemirovsky, in the Brian Niles-directed 9-minute short drama film ‘Aurora.’ It released in the US on May 13, 2017. She also played the role of a brunette in the American sex comedy ‘The Layover,’ starring Kate Upton, Alexandra Daddario, Matt Barr, Molly Shannon, Kal Penn, Rob Corddry, and Matt L Jones. The film was directed by Sophia’s father and initially released on August 3, 2017, through ‘DirecTV Cinema.’ It had a limited release on September 1, 2017, through ‘Vertical Entertainment.’ Sophia accompanied her father to the 76th ‘Golden Globe Awards,’ held on January 6, 2019, at ‘The Beverly Hilton’ in Beverly Hills, California.
You May Like

Women Film & Theater Personalities
American Film & Theater Personalities
American Female Film & Theater Personalities
Leo Women
Continue Reading Below
Controversies & Scandals
Sophia unknowingly got her name dragged into a controversy when her mother became involved in a criminal conspiracy in pursuit of improving Sophia’s chances of enrolling at an elite college. On March 12, 2019, the ‘FBI’ and the ‘US Attorney's Office’ charged Felicity and dozens of others in the 2019 college admissions bribery scandal, also referred to as ‘Operation Varsity Blues.’ It was alleged by the prosecutors that an amount of $15,000 that Felicity had donated to the ‘Key Worldwide Foundation’ was actually a bribe that was given to the person who, pretending to be Sophia, took the ‘SAT’ on her behalf and scored 1,420. The imposter’s score was much higher than Sophia’s ‘PSAT’ score. Felicity was indicted and arrested for fraud and conspiracy. She was released on a $250,000 bail on March 13, 2019. She pleaded guilty to honest services fraud on May 13, 2019. She will be sentenced on September 13, 2019.
Family & Personal Life
Sophia was born to William Hall Macy and Felicity Huffman, on August 1, 2000, in Los Angeles, California, US. She is their elder daughter. Her parents dated on-and-off for 15 years before getting married on September 6, 1997. Sophia has a younger sister named Georgia Grace Macy, born on March 14, 2002.
Sophia attended the ‘Los Angeles High School of the Arts.’ She once mentioned Canadian actor and musician Ryan Gosling and American actor Emma Stone as her favorite celebrities.
Not much is known about her relationship status. Her father, however, mentioned in an interview that he wished his children had a lot of sex without any guilt. In her spare time, Sophia likes to listen to music and read. She loves traveling. She once mentioned Greece as her dream holiday destination.
You May Like 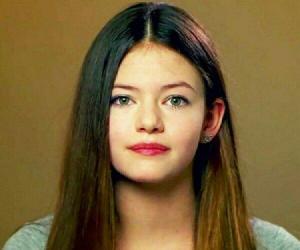