Skrillex is an American singer, songwriter, instrumentalist, music producer, and DJ who is acclaimed for his music videos and albums like ‘First of the Year’, ‘Bangarang’, and ‘My Name is Skrillex’. His career as a musician and singer took off when he volunteered to play the guitar for the rock band ‘From First to Last’, but was instead chosen as the lead vocalist. Skrillex, during his association with the band, contributed significantly towards the launch of albums including ‘Heroine’ and ‘Dear Diary, My Teen Angst Has a Body Count’ but eventually left to chart a solo career. As a soloist, Skrillex joined forces with bands like ‘All Time Low’, Forever the Sickest Kids’, ‘The Matches’, and ‘All Time Low’ during countrywide music tours. ‘Gypsyhook EP’ was his debut extended play (EP) to be launched commercially, and following its release, Sonny began recording his first studio LP ‘Bells’ but eventually called it off. He resumed performing and recording albums using his stage name ‘Skrillex’. The first EP ‘My Name is Skrillex’ he recorded under his nom-de-plume was available for download free of cost via his official MySpace profile. Skrillex has bagged eight Grammy Awards till date.
Continue Reading Below American People
California Musicians
Male Singers
Male Musicians
Male Guitarists
Childhood & Early Life
Skrillex was born Sonny John Moore on 15 January 1988, in Northeast Los Angeles. When Skrillex was 2 years old, his family relocated to San Francisco’s Forest Hill locality.
He started his education in an elementary school and later on shifted to a nearby boarding school situated in Mojave Desert in Las Vegas. When Skrillex was 12 years old, his family relocated back to Northeast Los Angeles.
His parents, who were members of the Scientology sect, admitted him in a private academy school that followed some of the ideologies of L Ron Hubbard—founder of the Scientology cult. In the school, he faced bullying and as a result he was homeschooled at the age of 14.
In 2004, at the age of 16, Skrillex learned that he was adopted and hence he dropped out of the school.
As a teenager, Skrillex would often attend punk concerts in the Mexican American localities in South and East Los Angeles and later on went to clubs situated in downtown LA that played electro house music.
Continue Reading Below
You May Like

Famous Beautiful Women With Green Eyes
Career
In 2004, Skrillex flew out to Georgia after contacting Matt Good, frontman of rock band ‘From First to Last’ (FFTL). Skrillex had expressed his desire to play the guitar for their first studio album but was eventually selected as the lead singer after music producers McHale Butler, Eric Dale, and Derrick Thomas heard him out.
‘First to Last’s’ first LP (long playing) “Dear Diary, My Teen Angst Has a Body Count” recorded with Skrillex, was released by Epitaph Records in June of 2004. The release of the LP was followed by a series of successful music tours, notable amongst these being the ‘Dead by Dawn’ and ‘Vans Warped’ tours.
Epitaph Records released the band’s 2nd album, titled “Heroine” in March 2006. The album which was lapped up by music aficionados, spurred the band to embark on a countrywide tour yet again. However, Skrillex developed vocal problems which compelled the band to call off numerous upcoming tours.
Following a surgical procedure, Skrillex declared that he’d dropping out of the group to focus on a solo career as a soloist. He performed for the last time with ‘FFTL’ in the ‘House of Blues’ restaurant-cum-bar in Orlando, Florida, the group’s hometown.
After leaving the band, Skrillex created and hosted his profile on MySpace, and uploaded clips of three songs “Glow Worm”, “Equinox”, and “Signal”.
He gave his first solo public performance on 7 April 2007 along with Carl Robbins, a renowned harpist. He continued releasing trailers of several numbers on his MySpace profile and subsequently formed his own band and performed alongside ‘Team Sleep’—a music band—during their countrywide tour.
Skrillex was part of the 2nd yearly AP Tour endorsed by ‘The Alternative Press Magazine’ in February 2008 in which reputed music bands like ‘Forever the Sickest Kid’, ‘The Matches’, and ‘The Rocket Summer’ participated.
The Alternative Press Magazine brought out a ‘100 Bands You Need to Know’ annual publication where each and every band that took part in the AP tour was showcased on the cover.
In 2009, Skrillex released an EP titled ‘Gypsyhook’ in digital format which comprised of 4 remixes and 3 songs. CDs and DVDs of the EP were up for sale during his live performances.
Continue Reading Below
He joined the bands ‘Paper Route’ and ‘Innerpartysystem’ on their tours and did the opening act for ‘Chiodos’ when the band embarked on a European tour. Skrillex performed using the group name ‘Sonny and the Blood Monkeys’ when he joined the band ‘Hollywood Undead’ for a tour in 2009.
He launched his official debut EP, ‘My Name is Skrillex’, on 7 June 2010, as free download.
He kick-started the ‘Project Blue Book Tour’ in 2011 for promoting a song “Bring Out the Devil” and also unveiled multiple new tracks during the tour, the notable ones being “Cinema”, “Reptile” and “First of the Year”.
In June 2011, Skrillex launched his third EP, namely, ‘More Monsters and Sprites’. The EP contained three original soundtracks and two adaptations of “Ruffneck”, also an original number.
In August 2011, Skrillex declared the creation of his own record label named ‘OWSLA’ and went on to release a video of his song “First of the Year” on Spin.com on 17 August 2011.
He lent his vocals for a song named “Lick It” that featured in the album ‘Fire & Ice’ by Kaskade, in 2011.
On 8 November 2011, Skrillex declared that he’d be coming out with a fresh album titled ‘Voltage’ but the album never saw the light of the day. Nevertheless, he released an EP named ‘Bangarang’ on 23 December 2011.
He released his 7th EP, ‘Leaving’, on 2 January 2013 on the OWSLA subscription service, Nest IV.
In 2017, it was publicized on social media that he was reuniting with the band ‘From First to Last’.
Major Works
Skrillex unveiled demos of three songs, “Glow Worm”, “Equinox” and “Signal” on his MySpace page in 2007 which were his debut numbers as a solo artist.
He released an EP ‘Gypsyhook’ digitally in 2009. His other prominent albums include ‘My Name is Skrillex’, ‘More Monsters and Sprites’, ‘Bangarang’, ‘Leaving’ and ‘Recess’.
Awards & Achievements
Skrillex has bagged a total of 8 Grammy Awards; thrice in 2012 and 2013, and twice in 2016. He also won the MTV Music Video Award consecutively in 2012 and 2013.
Personal Life & Legacy
Skrillex whose real name is Sonny John Moore has admitted that there was nothing great about his stage name. The spark for the moniker came when he recollected that his friends used to tease him by calling him ‘Skril’, ‘Skrilly’, and ‘Skrillex’.
He considers ‘The Doors’, ‘Nine Inch Nails’, ‘Marilyn Manson’, ‘Squarepusher’ and ‘Aphex Twin’ as his early musical influences.

See the events in life of Skrillex in Chronological Order 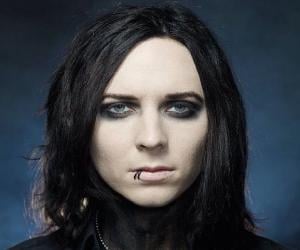