Sir Thomas Sean Connery was a Scottish actor, best known for portraying the iconic role of James Bond in movies. Having been raised in poverty, he started working at an early age to support his family. He had a keen interest in bodybuilding and took part in a bodybuilding competition which changed the course of his life. He was appreciated for his muscular built and was suggested to audition for a role in a musical. He got the part and decided to make acting his profession for the rest of his life. He starred in minor roles in films and television programs along with his work in theatre. He received his big breakthrough when he was approached to play the role of James Bond in the movies based on Ian Fleming’s novels. He played the role with elan which made him an overnight star. He was much appreciated for his portrayal of the legendary character and established a tremendous fan following all over the world. Apart from playing Bond, he also starred in other productions which were successful critically as well as commercially. He was one of the most charming and charismatic actors in the industry with a sense of gratitude for his audience, who turned him from an ordinary person to an unforgettable superstar of all time. James McAvoy
DID WE MISS SOMEONE?
CLICK HERE AND TELL US
WE'LL MAKE SURE
THEY'RE HERE A.S.A.P
Quick Facts

Scottish Celebrities
Actors
Scottish Men
Tall Celebrities
Tall Male Celebrities
Childhood & Early Life
Sean Connery was born on August 25, 1930, in Fountainbridge, Edinburgh, Scotland, to Joseph Connery, a truck driver and Euphemia McBain, a cleaning woman. He has a younger brother named Neil Connery.
His parents were poor and lived in a neighborhood that had rubber mills and breweries. As an infant, he used to sleep in a bureau drawer as his parents could not afford a crib for him.
He grew up on the streets, playing football with the neighborhood boys. In his early years, he was dubbed the ‘Big Tam’ because of his muscular built and ability to pound his friends.
He received his early education from ‘Tollcross Elementary School.’ He was good at mathematics and also had a keen interest in reading. He used to go fishing with his brother and skipped school for extracurricular activities.
At the age of 13, he quit school to earn money for his family and got a job as a milkman in Edinburgh. After three years, he joined the ‘Royal Navy’ but was discharged after some time on medical grounds due to his stomach ulcer. Upon returning, he served as a truck driver, laborer, lifeguard, and coffin polisher to support his family. 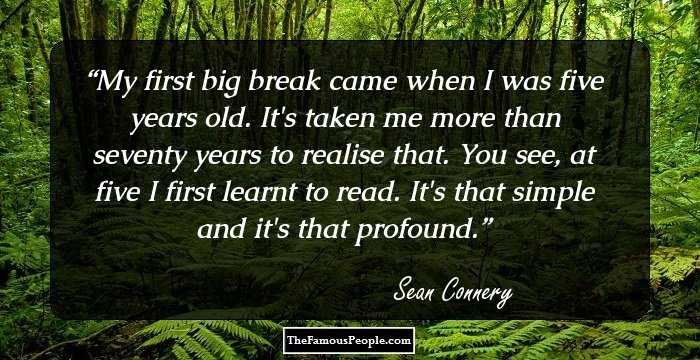 Quotes: You, Me, I
Continue Reading Below
Career
Sean Connery had a keen interest in bodybuilding. At the age of 23, he traveled to London and took part in ‘Mr. Universe’ contest on the persuasion of his friends. He was suggested by one of his competitors to audition for the stage production of ‘South Pacific.’ He gave the audition and was selected for the role of one of the Seabees chorus boys.
During the production of ‘South Pacific’ at ‘Opera House,’ Manchester, he became friends with the American director and actor Robert Henderson, who introduced him to ‘Maida Vale Theatre’ in London.
He worked for TV series and movies alongside theatre to make both ends meet. In 1957, he did minor roles in some of the movies, including ‘No Road Back,’ ‘Action of the Tiger,’ and ‘Time Lock.’
In 1958, he was offered a major role in ‘Another Time, Another Place’ opposite Lana Turner. In 1959, he played a role in Robert Stevenson's film ‘Darby O'Gill and the Little People.’ Both films were quite successful.
In 1961, he was approached by producers Harry Saltzman and Albert ‘Cubby’ Broccoli for the role of James Bond in the movies based on Ian Fleming’s best-selling novels. He was reluctant at first but eventually agreed to play the character, which made him an icon.
He starred in seven Bond films – ‘Dr. No’ (1962), 'From Russia with Love' (1963), 'Goldfinger' (1964), 'Thunderball' (1965), 'You Only Live Twice' (1967), 'Diamonds Are Forever' (1971), and 'Never Say Never Again' (1983).
Alongside Bond movies, he also starred in other critically acclaimed and successful movies which include ‘Marnie’ (1964) , ‘The Hill’ (1965), ‘Murder on the Orient Express’ (1974), ‘The Untouchables’ (1987), and Steven Spielberg’s ‘Indiana Jones and the Last Crusade’ (1989).
He announced his retirement from acting on 8 June 2006, while receiving ‘Lifetime Achievement Award’ from ‘American Film Institute.’ 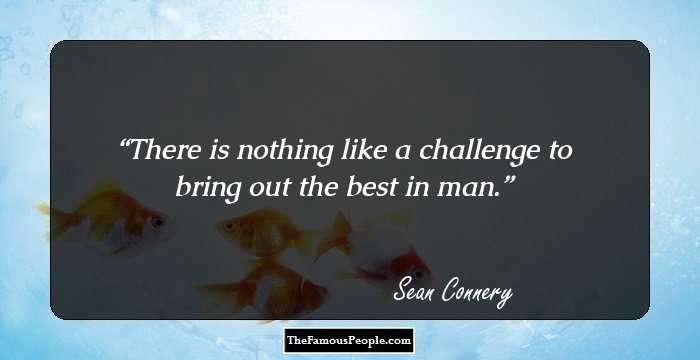 Quotes: Like
Continue Reading Below
Major Works
Sean Connery was regarded as the quintessential British secret agent for his portrayal of the fictional spy James Bond in movies. He was sleek, smooth, and confident in playing the character. James Bond, as portrayed by Connery, was selected as the third-greatest hero in cinema history by the ‘American Film Institute.’
He was critically acclaimed for his performance in the 1986 movie ‘The Name of the Rose’ and the 1987 film ‘The Untouchables.’
He received positive reviews and praises for his portrayal of William Forrester in the movie ‘Finding Forrester’ which released in 2000.
Awards & Achievements
He won the ‘Academy Award for Best Supporting Actor’ for his performance in the 1987 film ‘The Untouchables.’
He won the ‘Lifetime Achievement Award’ from the ‘Academy of Science Fiction, Fantasy and Horror Films’ in 1995.
He won three ‘Golden Globe’ awards and two ‘BAFTA’ awards, one of them being a ‘BAFTA Academy Fellowship’ award.
In 1989, he was named the ‘Sexiest Man Alive’ and in 1999, ‘The Sexiest Man of the Century’ by ‘People’ magazine.

In 1999, Sean Connery received a ‘Kennedy Center Honor’ for ‘Lifetime Achievement’ and was knighted by Queen Elizabeth II in July 2000.

In 2006, he was honored by the ‘American Film Institute’ with a ‘Lifetime Achievement Award.’
Continue Reading Below
Connery was ranked fourth in a poll conducted by ‘Channel 4’ for their list of ‘100 Greatest Movie Stars’ in 2000.
A bronze bust sculpture was placed in Tallinn, Estonia in honor of Sir Connery in 2010. 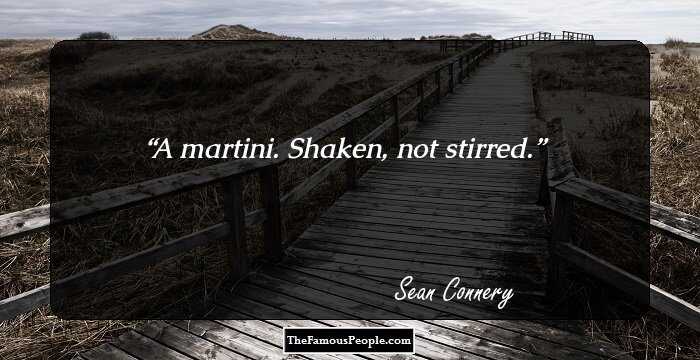 In December 1962, Sean Connery secretly married Diane Cilento, a divorced Australian actress. They had a son named Jason Connery who went on to become an actor. Connery and Cilento divorced in 1973 amidst rumors that he had abused her which led to their divorce.

In 1975, he married a French-Moroccan artist named Micheline Roquebrune. Connery and Roquebrune share a common passion for golf.

Connery was a member of the ‘Scottish National Party.’ He campaigned for Scottish independence from the UK.

Connery faced accusations of being a tax exile, for which he produced documents of him paying tax to the UK in 2003. He was also caught amidst a tax evasion investigation after selling his Marbella villa in 1999 but was subsequently cleared by the Spanish officials.

Quotes By Sean Connery | Quote Of The Day | Top 100 Quotes

See the events in life of Sean Connery in Chronological Order