Through his nonsensical, yet clever and anarchic comedy, Sid Caesar won the hearts of a million American television viewers during the 1950s. With more emphasis on facial expressions, accents and body language, he set a new genre of comedy, unlike the universal dialogue-filled comedy and standup material, thus being considered a sketch comic actor - something unique and unlikely during that era. His double-talking act, using illogical utterances in different dialects, was an unbelievable talent that won the hearts of one and all. Best remembered for his live tele-series ‘Your Show of Shows’, followed by ‘Caesar’s Hour’, which was a combo of musical revues, sketches and situation comedy, he changed the course of television and extracted the best out of comedy. This comedy titan was honored through several awards and honors for his over-60 year career dedicated to movies and TV. It was through his two whirlwind shows that writers and performers, like Carl Reiner, Mel Brooks, Woody Allen, Larry Gelbart, Lucille Kallen, Imogene Coca and others took his comic agenda to places and across the world. His mimicry and comic timing was often compared to the likes of Charlie Chaplin.
Continue Reading Below

American Celebrities
American Men
New Yorkers Actors
Virgo Actors
Male Comedians
Childhood & Early Life
Isaac Sidney Caesar was born on September 8, 1922, as the youngest of three brothers, in Yonkers, New York, to Jewish immigrants Max Ziser from Poland and Ida (nee Raphael) from Russia.
His liking for the saxophone started at his parents’ restaurant, as a child, when a customer accidently left one there, while his stint with double-talk began when he used to mimic the accents of the customers at their tables.
He gave his first performance as a saxophonist at the Catskill Mountains with the Swingtime Six Band, in 1936. He was also a part of the band while studying at Yonkers High School. 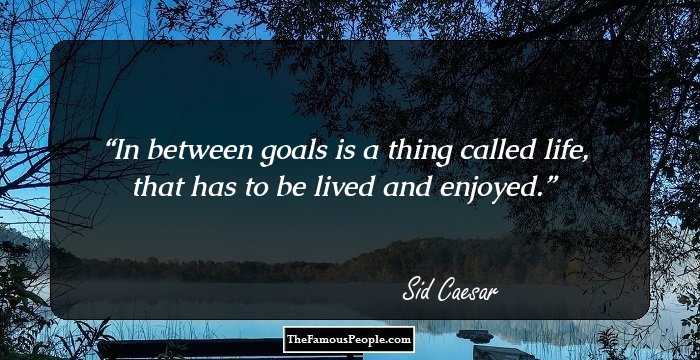 Who Is The Most Popular BTS Member?
Career
Upon graduation in 1939, he started working as a saxophonist at Catskill Mountains’ Vacationland Hotel resort, after being denied entry into the musicians’ union in New York in order to become a musician.
He became a musician in a dance band and started doing three comedy shows a week, which landed him at the reputed Julliard School of Music for auditing clarinet and saxophone classes.
He served as a musician in the musical revue Tars and Spars, in the US Coast Guard during World War II, posted in Brooklyn, where his comic timing was spotted by producer Max Liebman who offered him to switch over to comedy.
He debuted in Hollywood in his musical-comedy adaptation ‘Tars and Spars’ by Columbia Pictures, in 1946, but the contract was cut short with his three-minute special appearance in ‘The Guilt of Janet Ames’ (1947).
In 1949, he went on to appear in the Broadway revue ‘Make Mine Manhattan’, featuring one of his signature pieces ‘The Five Dollar Date’, for which he received immense appreciation.
He began his television career with his hour-long show ‘The Admiral Broadway Revue’, broadcast on NBC and Dumont, though the show was called off after 26 weeks, due to non-fulfillment of the demand by its sponsor, Admiral.
His 1958 ‘Sid Caesar Invites You’ was short-lived as the taste of the audience had changed by that time and demanded something new and fresh, thus forcing him to return to Broadway’s musical comedy ‘Little Me’, receiving accolades.
Even in his later years, he made his presence felt in Hollywood with ‘Vegas Vacation’ (1997), ‘The Wonderful Ice Cream Suit’ (1998), and documentary ‘Lunch’ (2012) and on television with ‘Life With Louie’ and ‘Mad About You’. 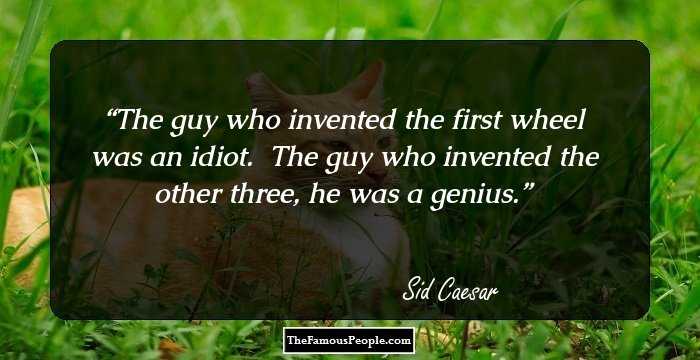 Continue Reading Below
Major Works
He gained popularity with the 1950 Liebman’s 90-minute live Saturday night program ‘You Show of Shows’, starring Imogene Coca and Carl Reiner, which ran for five seasons and defined the television’s Golden Age.
In 1954, he went on to appear in his next successful award-winning project ‘Caesar’s Hour’, who along with Carl Reiner and Howard Morris, entertained the American audience with his antics, sketches and situation comedy.
He played an important role in the 1963 multi-starrer screwball comedy film ‘It’s a Mad Mad Mad Mad World’, after which he appeared in ‘The Busy Body’ (1967) and ‘The Spirit is Willing’ (1968).
During the 1970s and 1980s, he made appearances in some popular movies, including ‘Airport 1975’ (1974), ‘Silent Movie’ (1976), ‘Grease’ (1978), ‘History of the World: Part I’ (1981) and ‘Grease 2’ (1982).
His battle with alcohol and prescription drugs and recovery has been described in his 1982 autobiography ‘Where I Have Been’, after he published his second autobiography ‘Caesar’s Hours’ in 2004, co-written by Eddy Friedfeld.
Awards & Achievements
He received 11 Emmy Awards nominations, winning on two occasions – Best Actor (1952) and Best Continuing Performance by a Comedian in a Series (1957).
He was honored with the Lifetime Achievement Award by British Comedy Awards (1987) and Television Critics Association (2011).
He was inducted into the Hollywood Walk of Fame, in 1960, and Television Academy Hall of Fame, in 1985.
In 2006, he was conferred upon with the Pioneer Award by TV Land Awards. 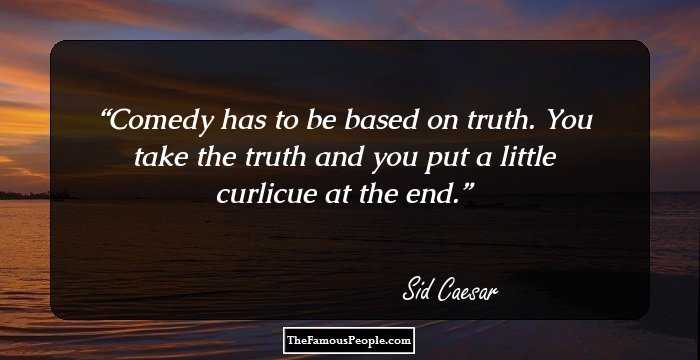 Quotes: You
Personal Life & Legacy
He married Florence Levy, niece of entertainment director Don Appel, on July 17, 1943. The couple had three children – Michele, Rick and Karen. Florence died on March 3, 2010, thus ending their 66 years relationship. She was 88.
He passed away on February 21, 2014, in the Trousdale Estates section of his Beverly Hills home in California, aged 91, following a short illness. He was buried at Mount Sinai Memorial Park Cemetery.
In 2005, the Sid Caesar Award for Television Comedy was launched by the Humane Society of the United States in his honor, awarding individuals for their exceptional work on raising awareness on animal issues among the public.
Trivia
It is assumed that his father got his surname Caesar from the immigration officers upon arriving at Ellis Island from Poland, as a child.
This comedy master was able to communicate only in English and Yiddish, despite being fluent in several foreign languages, including Japanese, Italian, French, and German.

See the events in life of Sid Caesar in Chronological Order