Advanced Search
Shaqir O’Neal is an American basketball player who is currently a student at Crossroads High School in Santa Monica, California. He is the third of four children of NBA Hall of Fame center, Shaquille O'Neal, and his former wife and reality television personality, Shaunie Nelson. A California native, Shaqir has always wanted to follow in his father’s footsteps into the world of basketball. He seems to have inherited Shaquille’s height and had already been six feet three inches tall as of late 2018. While his older brother, Shareef O'Neal, who is also pursuing a career in professional basketball, is more popular among the two, Shaqir is also steadily gaining popularity. He has been developing his skills in the California Interscholastic Federation league. By significantly contributing to several wins of his team, he has recently drawn media attention, with many people speculating on his prospects. Unlike his father, who is built like a tank, Shaqir is lean, fast, and agile. His skill set is similar to that of his brother in the sense that both rely on their mobility and speed to score points. Sunday Rose Kid...
DID WE MISS SOMEONE?
CLICK HERE AND TELL US
WE'LL MAKE SURE
THEY'RE HERE A.S.A.P
Quick Facts

American People
Black Family Members
American Men
Aries Men
Family & Childhood
Shaqir was born on April 19, 2003, in Los Angeles, California, to Shaquille O'Neal and his former wife Shaunie Nelson. He has two other siblings besides Shareef, older sister Amirah and younger sister Me'arah. He also has an older half-brother named Myles from his mother’s previous relationship and a younger half-sister named Taahirah from his father’s relationship with former girlfriend Arnetta Yardbourgh.
Widely considered to be one of the greatest players in the history of the National Basketball Association (NBA) and the sport, Shaquille is a four-time NBA champion, three-time NBA Finals MVP, one-time NBA MVP, 15-time NBA All-Star, one-time Olympic gold medallist, and one-time FIBA World Cup champion. In 2016, he was inducted into the Basketball Hall of Fame. He and Shaunie exchanged wedding vows on December 26, 2002. Five years later, on September 4, 2007, Shaquille approached the court seeking a divorce from Shaunie. Although they reconciled that time, the couple ultimately divorced in 2011. Since then, they have co-parented Shaqir and his siblings.
In Arabic, Shaqir means either “thankful” or “fair”. His father has been identified as a Muslim by various sources. However, Shaquille has stated “I'm Muslim, I'm Jewish, I'm Buddhist, I'm everybody 'cause I'm a people person.” His mother is a Baptist. As a result, he was raised in a multi-religious, secular household.
Continue Reading Below
Basketball
It is never easy to join the same profession as one’s parents. For the rest of your life, people will compare you to them, and you will constantly be judged on how you have managed to preserve their legacy. Shaqir is lucky in this regard. Shareef decided to pursue a basketball career before him and has borne much of the burden of expectations. This has allowed Shaqir to develop his skills in relative privacy. Gifted with long arms, good vision, and excellent speed, he is a natural defender as well as an explosive finisher. For someone his age, his capability of shooting three-pointers in transition and off the dribble is extremely rare. He is also equipped with a consistent jump shot.
Shaqir attends Crossroads High School and serves as a forward for the Roadrunners in junior varsity basketball. He has led his team to many victories, including one against Ribet Academy in November 2018.
Reality Television & Social Media Presence
Shaqir has appeared in his mother’s reality show, ‘Shaunie's Home Court’, which started airing on VH1 in 2016. He is quite active on social media and has accumulated over six hundred thousand followers on Instagram to date. On Twitter, he has several thousand followers. 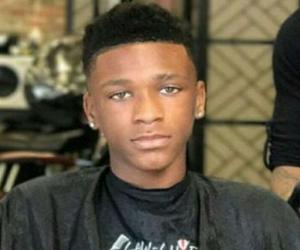