Seth Meyers is an American actor, comedian, writer, political commentator, and TV host. He is best known for his ‘NBC’ late-night talk show ‘Late Night with Seth Meyers.’ He has previously worked as a writer and actor for the popular show ‘Saturday Night Live.’ Seth was born in Illinois and was raised in several places across the country. While in college, he discovered his love for comedy and traveled with an “improv” comedy troupe named ‘Boom Chicago.’ He started traveling across Europe with his troupe and quickly gained attention. It was during a show in Chicago that he grabbed the attention of the producers of ‘Saturday Night Live.’ By 2003, he became a regular member on the show. It brought him international fame. After going through several small hosting stints on TV, he was chosen to host the show ‘Late Night with Seth Meyers.’ He has also appeared as an actor in films such as ‘Journey to the Center of the Earth,’ ‘Spring Breakdown,’ and ‘New Year’s Eve. 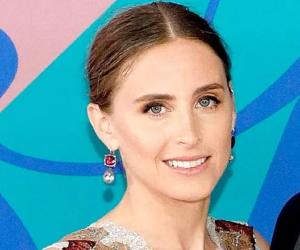 American People
Comedians
TV Presenters
Talk Show Hosts
American Men
Childhood & Early Life
Seth Meyers was born on December 28, 1973, in Evanston, Illinois, to Hilary Claire and Lawrence Meyers Jr. His mother was a French teacher, and his father worked in finance. Due to his father’s jobs, the family did not stay in one place for a long time and continued to move around the country.
Seth spent the early few years of his life in Michigan, and the family later shifted to New Hampshire. The small family had two children: Seth and his little brother, Josh. Josh is also a comedian, and both the brothers started their careers together, with “improv” groups.
Seth graduated from ‘Manchester High School West’ in New Hampshire. By the time he was in high school, he had gained a significant interest in acting, especially in “improv.” He and his brother, Josh, often practiced their comedy routines with each other.
Seth learned French from his mother. Although he was good in academics, it was not his area of interest. He was mostly active in extra-curricular activities, both in school and in college.
He attended ‘Northwestern University,’ where he joined several communities, such as the ‘Phi Gamma Delta.’ At the same time, he continued to perform “improv” comedy and was determined to build an acting career.
While in college, Seth became independent and ran a hot-dog stand to pay his bills. He also joined ‘Mee-Ow Show,’ the “improv” group of ‘Northwestern University.’ Once he graduated from the university, he went out in search of steady jobs as a comedian. He came across ‘Boom Chicago,’ an “improv” comedy troupe based in Amsterdam. Seth and his brother, Josh, joined the group and spent the next few years with it.
Continue Reading Below
You May Like

Famous Beautiful Women With Green Eyes
Career
While in Amsterdam, Seth continued to do “improv” with other ventures. He partnered with comedian Jill Benjamin and staged a two-person show named ‘Pick-Ups and Hiccups.’ The show was a big hit in Amsterdam and was staged five nights a week in several theaters across the city.
He had been a major fan of ‘Saturday Night Live,’ which was one of the longest-running variety TV shows in the US. However, he did not know the tricks to break into it. His show with Jill Benjamin took him to various cities across Europe. On one such occasion, he brought the show to Chicago, where it finally got noticed by the producers of ‘Saturday Night Live.’
The show was part of the on-going “improv” festival. Following his performance, he was called for an interview in New York. Seth traveled to New York and was hired for the show.
Before his arrival on the show, he had appeared on a single episode of the series ‘Spin City’ in 2001. The same year, he made his ‘Saturday Night Live’ debut in one of their sketches. The variety show performs several comedy sketches and is known to give breaks to several struggling actors and comedians.
Seth started appearing on the show, initially playing various characters. After working on the show for four years, he was given the job of a writing supervisor. In 2006, he was finally promoted to the position of a co-head writer of the show and shared writing credits with comedians such as Tina Fey and Andrew Steele.
He failed an audition for an anchor on ‘Weekend Update’ in 2004. However, in the 2006–2007 season, he was finally promoted to the position of a co-anchor, along with Amy Poehler. Amy left the show in 2008, and for the next few years, Seth appeared as a solo anchor. He was joined by Cecily Strong as a co-anchor in 2013.
The show ‘Saturday Night Live’ brought Seth nationwide fame. His comic timing and writing skills were immensely praised. He mimicked celebrities such as Tom Cruise, Prince Charles, Tobey Maguire, John Kerry, Michael Caine, Brian Williams, and Donald Trump Jr. He also assumed several unknown personalities in his sketches.
The segment ‘Weekend Update’ became particularly popular with the audiences. Poehler and Seth became famous for their phrase ‘Really!?!,’ which they often uttered after hearing something shocking in the news-reading segment. Several media houses praised them for their sarcastic writing and acting skills.
Seth bid goodbye to ‘Saturday Night Live’ in 2014 to focus on his other ventures. He appeared on the final episode in February.
In 2013, an announcement stated that Seth would be the new host of the popular show ‘Late Night.’ He replaced Jimmy Fallon on the show. ‘Late Night with Seth Meyers’ premiered on ‘NBC’ on February 24, 2014, and his first guest was Amy Poehler. The show has been running successfully to date.
Seth has also appeared in many films from time to time. He made his film debut in 2004 with ‘See This Movie’ and has since appeared in films such as ‘Journey to the Center of the Earth,’ ‘American Dreamz,’ ‘Spring Breakdown,’ and ‘The Interview.’
He has also appeared in series such as ‘The Office’ and ‘Portlandia.’
He has also worked as a writer for the ‘Golden Globe Awards’ in 2013, 2014, and 2015. He hosted the ‘Primetime Emmy Awards’ in 2014 and the ‘Golden Globe Awards’ in 2018.
Awards & Honours
Seth Meyers has won the ‘Writers Guild of America Award’ for ‘Saturday Night Live’ multiple times. He has also been nominated for the ‘Primetime Emmy Awards’ a number of times and has won it in 2011 for his contribution to a Justin Timberlake song on ‘Saturday Night Live.’
Personal Life
Seth Meyers got engaged to attorney Alexi Ashe in 2013, after dating her for five years. The couple got married in September 2013 on Martha’s Vineyard. The couple has two sons, Ashe and Axel. Their second son, Axel, was born in the lobby of their apartment in New York.
Seth Meyers is a huge fan of baseball and supports the team ‘Boston Red Sox’ ardently. Being a sports fan, he also supports the Dutch national football team.
He is a massive fan of the fantasy–drama series ‘Game of Thrones.’ He has featured several cast members from the series on his show. One of the show’s stars, Carice van Houten, is a close friend of his. Seth was one of the first people she informed after she got the role.

See the events in life of Seth Meyers in Chronological Order