DID WE MISS SOMEONE?
CLICK HERE AND TELL US
WE'LL MAKE SURE
THEY'RE HERE A.S.A.P
Popularity Index
5111
Basketball Players #14
Sportspersons #80
Quick Facts

Who is Scottie Pippen?

Scottie Maurice Pippen is an American retired basketball player best known for his tenure with the Chicago Bulls. He was part of the Bulls’ legendary roster that won six NBA Championships. Pippen, along with Michael Jordan, played an instrumental role in turning basketball into an international sport and securing the Bulls’ place in the game’s history. Regarded as one of the greatest small forwards of all time, Pippen is a seven-time NBA All-Star and one-time NBA All-Star Game MVP. He has also earned the accolades of being named to All-NBA First Team three times, All-NBA Second Team two times, All-NBA Third Team two times, NBA All-Defensive First Team eight times, and NBA All-Defensive Second Team two times. The Arkansas native was also a member of two US Olympic gold medal-winning teams, in 1992 and 1996, and is the only basketball player ever to have won an NBA title and an Olympic gold medal in the same year twice. As a player, Pippen was active for 17 years, 12 of which he played for the Bulls, four for the Portland Trail Blazers, and one for the Houston Rockets. A two-time Naismith Memorial Basketball Hall of Fame inductee, Pippen was listed as one of the 50 Greatest Players in NBA History at the 50th anniversary of the league in 1997. American Men
Tall Celebrities
Tall Male Celebrities
Male Sportspersons
Childhood & Early Life
Born on September 25, 1965 in Hamburg, Arkansas, Scottie Pippen is the youngest of the 12 children of Ethel and Preston Pippen. Ethel was 6 feet tall while Preston was 6'1" and all their children have inherited the trait, with Scottie, at 6'8", being the tallest. Preston was employed at a paper mill until he suffered a stroke that rendered his right side paralysed. It drastically limited his ability to speak and move. He passed away on May 10, 1990.
Pippen’s passion for basketball developed early. As a youth, he aspired to make the winning shot in the seventh game of an NBA championship one day. He studied at Hamburg High School where he played for their basketball program, the Hamburg Lions.
Despite his impressive high school performance, he did not attract any interest from the college scouts and eventually enrolled at the University of Central Arkansas in Conway. In the four years (1983-87) he played for the Central Arkansas Bears, he appeared in 93 games, scoring 17.2 points per game in average. 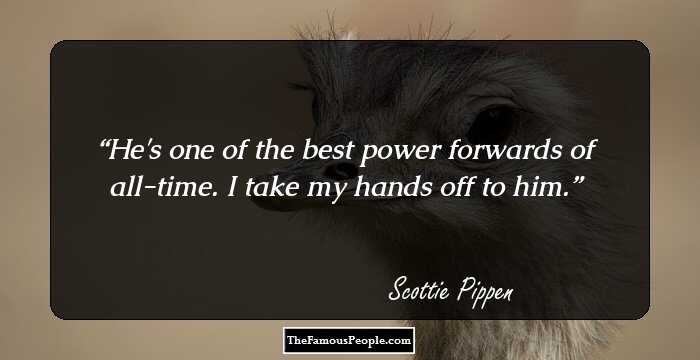 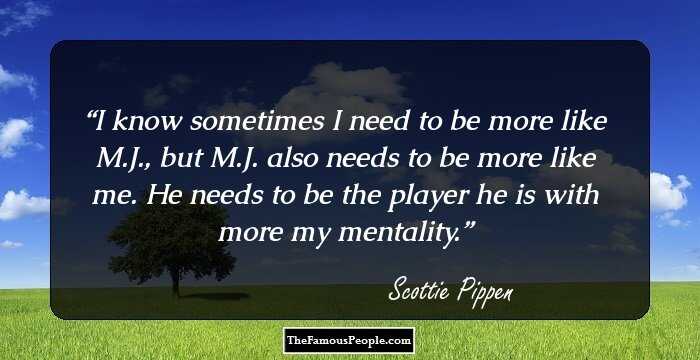 International Career
Scottie Pippen was a member of two gold medal-winning American basketball teams. He was part of the legendary US basketball delegation to the 1992 Barcelona Olympics, dubbed as “The Dream Team”. Besides Pippen and his teammate Jordan, the delegation included Charles Barkley, Magic Johnson, and Larry Bird. They had an easy tournament, defeating their opponents by 44 points on average to eventually win the gold medal against Croatia.
The 1996 Atlanta Olympics was no different. While Jordan and Bird had retired, Pippen and Barkley were still there. Nicknamed “Dream Team 3”, they won all their matches en-route to the gold medal against Yugoslavia.
In 2008, Pippen played for Torpan Pojat of Helsinki, Finland and Sundsvall Dragons of Sundsvall, Sweden before formally announcing his retirement.
Personal Life
Scottie Pippen has been married twice. He married his first wife, Karen McCollum, in 1988. Their son Antron was born in 1987. After they divorced in 1990, he wed Larsa Younan in 1997. They have four children together, Sophia, Justin, Preston, and Scottie Jr. Pippen also has two daughters, Sierra and Taylor, from other relationships.
Pippen often appears as himself in TV shows and films. There is a multitude of songs that contain references to the Bulls, the Dream Team, or Pippin personally. There is also a considerable amount of literature written about him. 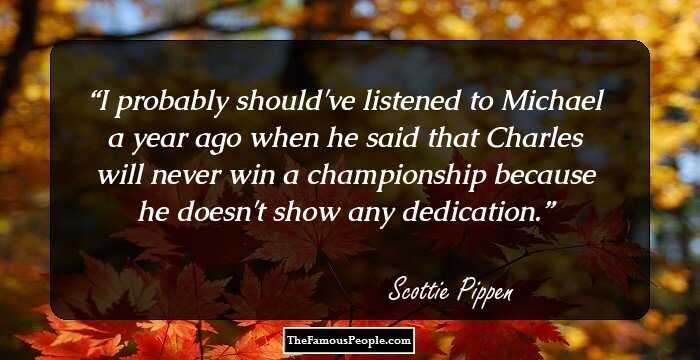 Trivia
Following Pippen’s retirement, his jersey (no. 33) was retired as well by the Bulls.

Quotes By Scottie Pippen | Quote Of The Day | Top 100 Quotes

See the events in life of Scottie Pippen in Chronological Order