Scarlett Moffatt is an English reality TV personality and presenter. She first gained fame following her appearance in the reality TV series ‘Gogglebox.’ Since then, she has appeared in numerous other shows as well and has emerged as one of British television's most loved reality stars. After being crowned “Queen of the Jungle” on the sixteenth season of the reality series 'I'm a Celebrity...Get Me Out of Here!', Moffatt proceeded to host the show 'I'm a Celebrity: Extra Camp.' She also presented Ant and Dec's ‘Saturday Night Takeaway.’ Despite her successful career as a TV personality, her private life is a tumultuous one. Her love life and romantic liaisons often make it to the headlines. She also received negative publicity for her weight issues. In spite of all the challenges in her life, she still feels extremely grateful for everything she has. Moffatt, who is trained in ballroom dancing, is a multifaceted lady. She has also served as a checkout operator for ASDA in the past. Behind the scenes, she is a very positive and optimistic individual. British People
Female Reality TV Stars
Briton Reality TV Personalities
Women Film & Theater Personalities
British Film & Theater Personalities
Career
In 2013, Scarlett Moffatt made her reality television debut with MTV's ‘Beauty School Cop Outs’. The following year, she became a regular cast member of the show ‘Gogglebox,’ in which she appeared alongside her parents, Betty and Mark. On 8 November 2016, it was announced that she would be appearing as a contestant on the sixteenth series of the reality show ‘I'm a Celebrity...Get Me Out of Here.’ She proved to be a popular contestant and went on to win the show. After this, Moffatt began appearing as a panelist on E4’s ‘Virtually Famous’.
In January 2017, she was asked to present the dating show ‘Streetmate’ as well as the variety show ‘Ant & Dec's Saturday Night Takeaway’. The same month, she presented the National Television Awards. The English beauty also served as the co-presenter for ITV2’s ‘I'm a Celebrity: Extra Camp’ that year. On 2 April 2018, she guest-hosted a radio show on Heart.
Till date, Scarlett Moffatt has also made guest appearances in a number of reality TV shows such as ‘Big Brother's Bit on the Side’, 'Play to the Whistle', 'Celebrity Juice ', 'Sunday Brunch' and 'Room 101', to name a few.
You May Like

British Female Reality Tv Personalities
British Female Film & Theater Personalities
Libra Women
Continue Reading Below
Controversies & Scandals
In March 2018, questions arose on the credibility of the claims made by Moffatt's fitness DVD tilted "SuperSlim Me Plan," which was released in 2016. The reality star claimed that the regime demonstrated in her DVD coupled with a 1,200 calories/day diet allowed her drop from a dress size 18 to a size 8. Later, it was stated that Moffatt had signed a deal with Big Shot Productions Ltd under which she had to attend regular fitness sessions before filming the DVD. Also, at that time, she consumed only 700 calories per day. Big Shot Productions Ltd later legally requested her to return their payment of £100,000 as she had regained weight soon after the fitness DVD's release.
Family & Personal Life
Scarlett Moffatt was born on 17 October 1990 in Bishop Auckland, County Durham, England, to Betty and Mark Moffatt. She has a younger sister named Ava-Grace who joined the reality star on ‘Googlebox’ during the show’s seventh season. Moffatt once disclosed in a reality show that she suffers from Bell's palsy. Talking about her love life, she has dated Luke Crodden and Lee Wilkinson in the past. Moffatt has also served as a disability advisor for students. 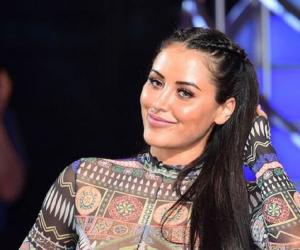