Satya Nadella is an Indian American engineer and the current Chairman & CEO of Microsoft. Nadella’s educational background undoubtedly played a great role in shaping his technical and leadership abilities. After pursuing a degree in ‘Electrical Engineering’ from the reputed ‘Manipal Institute of Technology’ located in India, this tech wizard relocated to the United States. Here, he studied at esteemed institutions like the ‘University of Wisconsin’ and the ‘Booth School of Business’. Satya Nadella’s life changed completely after he joined the IT giant ‘Microsoft’. Slowly but steadily he grabbed bigger opportunities at the enterprise and went on to manage several divisions of the company. One of Satya’s path-breaking accomplishments within the firm was to pave the way for the cloud computing technology, which later went on to become a trendsetter. Nadella even became an important stakeholder in the firm and owned stocks worth millions of dollars and earned a handsome salary, much higher than many engineers of his kind. He became a household name in 2014 after being crowned the ‘CEO’ of ‘Microsoft’. The tech wizard soon became popular amongst sections of the media across the world and is often invited as a guest speaker to many events across the United States N. R. Narayana ...
DID WE MISS SOMEONE?
CLICK HERE AND TELL US
WE'LL MAKE SURE
THEY'RE HERE A.S.A.P
Quick Facts

Satya Nadella was born on 19 August 1967, in Hyderabad, India, to Bukkapuram Nadella Yugandher and Prabhavati Yugandhar. His father was a member of Indian Administrative Service

He pursued his primary education at the ‘Hyderabad Public School’, located in the Begumpet region of the city. He then moved to the prestigious ‘Manipal Institute of Technology’, located in the Manipal town of Karnataka.

His desire to excel in the corporate world also motivated Nadella to move to one of the best business schools in the world, the ‘Booth School of Business’ affiliated to the ‘University of Chicago. He received a ‘Masters of Business Administration’ (MBA) degree from this prestigious institution. 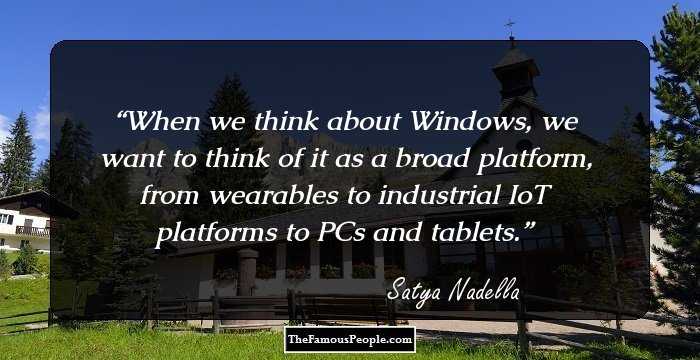 After completing his education, Satya Nadella joined the well-known firm ‘Sun Microsystems’. He worked in this company for a brief period and then moved to the Silicon-valley giant ‘Microsoft’, in 1992.

Satya Nadella started climbing the corporate ladder steadily while working at ‘Microsoft’. He then went on to make important decisions in the interest of the firm.

He was one of the few employees who suggested the concept of cloud computing to the firm. Eventually the company dedicated lot of its time and resources to the development of this technology. The result was the germination of one of the world’s largest cloud based entities, named ‘Microsoft Azure’.

Satya Nadella was later given the responsibility to control the ‘Research & Development’ department, which belonged to the ‘Online Service Division’ and was even appointed as the senior vice-president of the same. He joined this department in 2007 and continued being a part of it for the next four years.

Satya Nadella then moved to the Systems and Tools division of Microsoft and was even appointed its president. The annual turnover of Microsoft contributed by this segment of business alone is said to be around $20 Billion today.

He also guided ‘Microsoft’ to move many of their other projects such as the ‘Microsoft SQL Server’ and a few other tools to ‘Azure’.

After working in Microsoft for a period of twenty two years, Satya Nadella was promoted to the designation of the CEO of ‘Microsoft’ in 2014.

In 2017, Satya Nadella came out with his book 'Hit Refresh'. The book talks about his life, Microsoft and how technology is changing the world.

On June 16, 2021, Satya Nadella was named the Chairman of Microsoft. He succeeded John Thompson 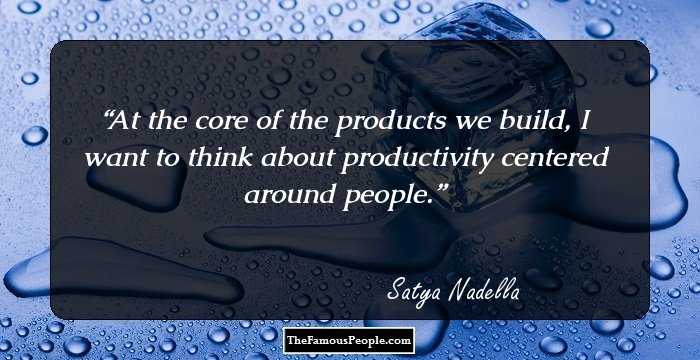 One of Satya Nadella’s greatest accomplishments was pioneering the ‘Cloud computing’ division of ‘Microsoft’. The annual turnover contributed by this division of the business was $16.6 Billion in 2011, when he was just appointed its head. In a matter of three years, the turnover saw a significant increase to around $20.6 Billion.

Satya Nadella got married to Anupama in 1992, who was the daughter of his father’s friend. The couple later became parents to three children, which included two daughters and a son. The family currently resides in the Bellevue, Washington.

He was widely criticized online, when his remark on hike of salaries for female employees came across as biased against women, at the ‘Grace Hopper Celebration of Women in Computing’ event.

When he is not caught with his business commitments, Satya Nadella likes to unwind by reading poetry. He is also really fond of cricket and attributes the sport as one of the reasons behind his leadership abilities. 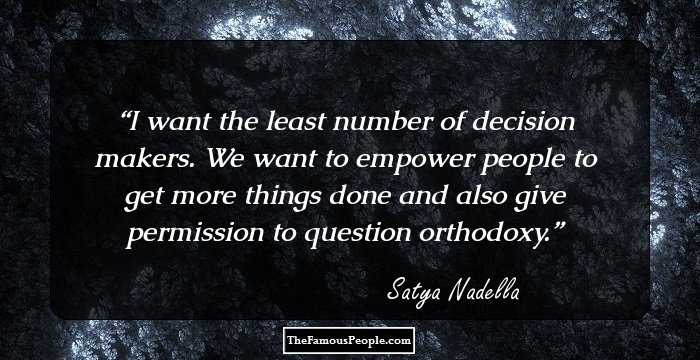 Top 10 Facts You Did Not Know About Satya Nadella

Satya Nadella is a huge cricket fan and derives inspiration from the sport.

He calls himself a lifelong learner and takes online classes in his spare time.

The Microsoft CEO loves reading poetry in his leisure time and compares poetry with coding.

As the Chairman & CEO of Microsoft, he is one of the most powerful Indian-born tech executives in the world.

He didn’t have any experience of being the CEO before being selected to head Microsoft in this role.

He is a huge fan of Seahawks, a professional American football team based in Seattle.

When Satya Nadella took on the role of CEO of Microsoft, Bill Gates re-joined the company to become his personal mentor.

He first met his wife when they were both students at Hyderabad Public School in the early 1980s.

He is a fitness enthusiast and is very passionate about running.

He has a sweet tooth and loves pastries.

Quotes By Satya Nadella | Quote Of The Day | Top 100 Quotes

See the events in life of Satya Nadella in Chronological Order