Advanced Search
Sarah Palin is an American politician who served as the ninth Governor of Alaska, from 2006 to 2009. A Republican, she ran for the office of the Vice President in the 2008 Presidential election, alongside the presidential nominee, Arizona Senator John McCain, becoming the first Republican woman to be nominated for the Vice Presidency. The daughter of a school teacher, she grew up to be an intelligent, beautiful and confident young woman. As a teenager, she was known for her competitive spirit and was very active in sports during her high school years. The versatile youngster was also musically inclined and was well-known for her beauty and poise—in fact she finished third in the Miss Alaska pageant. She completed a degree in communications at the University of Idaho and entered politics a few years later when she won a seat on the Wasilla city council. She went on to become the city’s mayor and had a successful stint that further fuelled her political ambitions. A member of the Republican Party, she was elected the Governor of Alaska in 2006, becoming the youngest person and first woman to be elected to the post. A popular politician, she gained national prominence when John McCain selected her to be his Vice Presidential running mate in 2008. The duo lost the election and Palin returned to her duties as the governor. In early 2015, the media speculated that she might be running for the Republican ticket for the 2016 Presidential election American People
American Women
Women Leaders
Aquarius Leaders
American Leaders
Childhood & Early Life
Sarah Palin was born as Sarah Louise Heath on February 11, 1964, in Sandpoint, Idaho, U.S. to Sarah, a school secretary, and Charles R. Heath, a science teacher and field coach. She has three siblings. Her family moved frequently during her childhood and finally settled in Wasilla.
She attended the Wasilla High School where she was a versatile student with interests in music and sports. She was also the head of the Fellowship of Christian Athletes.
A pretty girl, she won the Miss Wasilla beauty pageant in 1984 and then finished third in the Miss Alaska pageant.
She enrolled at the University of Hawaii at Hilo after high school and soon transferred to Hawaii Pacific University in Honolulu and later to North Idaho College. She eventually completed her bachelor's degree in communications with an emphasis on journalism from the University of Idaho in Moscow in May 1987. 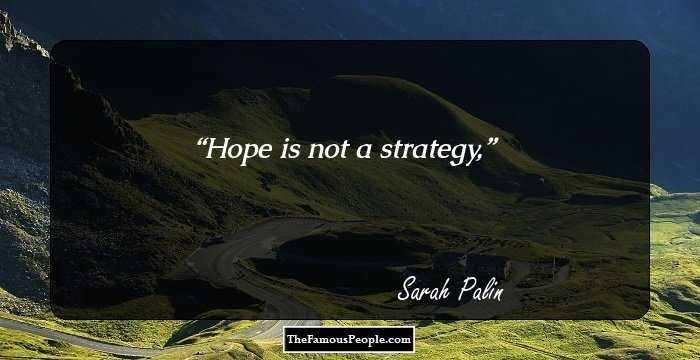 Quotes: Hope
Continue Reading Below
Career
She was employed as a sportscaster for KTUU-TV and KTVA-TV in Anchorage shortly after graduation. Eventually she became a sports reporter for the ‘Mat-Su Valley Frontiersman’.
She married Todd Palin in 1988 and became involved in her husband’s commercial fishing business.
Always a competitive and ambitious woman, she entered politics in 1992 by earning a seat in the Wasilla City Council. From the very beginning of her political career Palin has been a Republican.
Palin ran for mayor of Wasilla in 1996, successfully defeating incumbent mayor John Stein. In this position she reduced spending and cut property taxes while raising the city sales tax. She ran for re-election against Stein in 1999 and won another term as the mayor. She stepped down after the completion of her second term in 2002.
Palin ran for the Republican nomination for lieutenant governor of Alaska in 2002 but lost. Ever the gritty soul, she set her aims higher and ran for the office of governor of Alaska in 2006. She defeated Tony Knowles and made history by becoming the state’s first female governor as well as the youngest.
She proved to be very popular as the governor and her conservative stance was received well by the citizens. She made ethical and open governance a priority and focused on education and public safety. She opposed abortion and stated that sex education should be made mandatory in schools.
Her growing stature as a popular Republican brought her to the attention of the prominent Republican, presidential aspirant John McCain, who chose her to be his running mate in the 2008 presidential election. The Republicans felt that Palin would appeal to the Religious Right wing of the Republican Party and strengthen McCain’s position.
She was relatively unknown in the national scenario at that time and therefore prepared intensively for the vice-presidential debate with Democratic vice-presidential nominee Joe Biden at Washington University in St. Louis.
The McCain-Palin ticket subsequently lost the general election to the Democratic ticket of Barack Obama and Joe Biden, and Palin resumed her duties as governor while remaining active on the national political stage. She resigned from the governorship in 2009.
She released her memoir, ‘Going Rogue: An American Life’ in November 2009. The book elaborates on her private and public life, including her tenure as the governor and her controversial resignation. In 2010, she released her second book, titled ‘America by Heart’.
She also gained much attention for her association with the Tea Party movement, a generally conservative and libertarian group. She served as an unofficial spokesperson for the group and delivered the keynote address at the first National Tea Party Convention in February 2010. 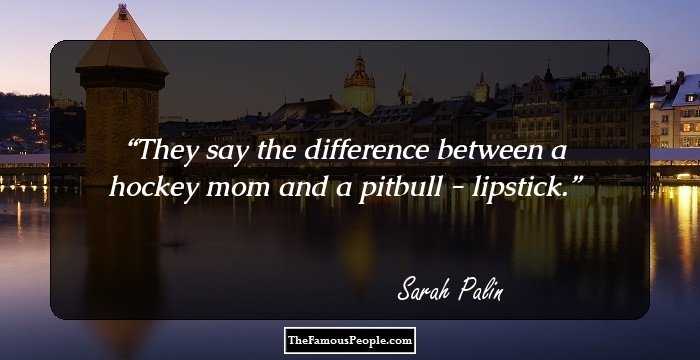 Major Works
Sarah Palin proved to be a very popular politician as the Governor of Alaska. In this position she focused on resource development, education and workforce development, public health and safety, and transportation and infrastructure development.
A conservative Christian, she advocated pro-life policies and opposed abortion in all cases. She is also against embryonic stem cell research. Her religious ideals impressed a lot of Alaskans when she supported Alaska's decision to amend its constitution to ban same-sex marriage.
Awards & Achievements
In 2008, the Alumni Association of North Idaho College gave Sarah Palin its Distinguished Alumni Achievement Award. 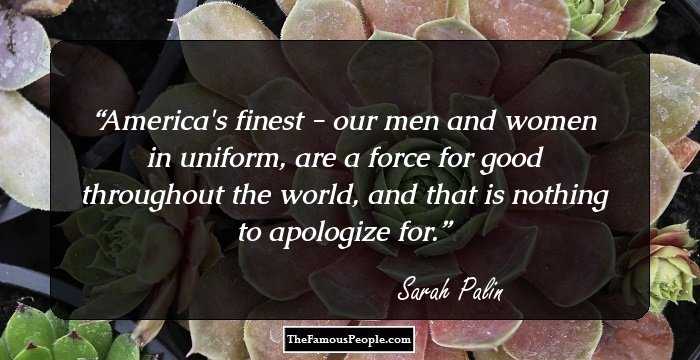 Quotes: Women
Personal Life & Legacy
She married her high school sweetheart Todd Palin on August 29, 1988. The couple has five children. Her family received considerable media attention in 2008 when it was revealed that her teenage daughter was pregnant out of wedlock. The girl ultimately gave birth to a son.

Quotes By Sarah Palin | Quote Of The Day | Top 100 Quotes

See the events in life of Sarah Palin in Chronological Order