Samuel Cook or Sam Cooke (as he was professionally known) was one of the greatest American singers. He was also a song writer, recording artist, and entrepreneur. He is famously remembered as the ‘King of Soul’ for his contribution to popular music. He was even credited as ‘the inventor of soul music’ by ‘All Music’ biographer Bruce Eder. He created a connection between soul and pop music, and boasted of a range of works that entertained audience belonging to varied ethnicities and cultures. He influenced other popular musicians like Aretha Franklin, Art Garfunkel, Rod Stewart, Bobby Womack, Curtis Mayfield, Al Green, Stevie Wonder, Billy Preston, Marvin Gaye, Otis Redding, and James Brown. He delivered around 30 hits in eight years. Even after his death, three of his posthumously released songs became immensely popular. Some of his hit songs are ‘Chain Gang,’ ‘You Send Me,’ ‘Cupid,’ ‘A Change Is Gonna Come,’ ‘Wonderful World,’ and ‘Twistin' the Night Away.’ He was one of the earliest musicians to explore the business prospect of a musical career and launched his own record label and publishing company. He also actively participated in the ‘Civil Rights Movement.’ He died at a young age of 33; there was a lot of speculation surrounding the circumstances of his death. Cause of Death: Gunshot

Samuel Cook was born on January 22, 1931, in Clarksdale, Mississippi, USA. He was born to a Baptist minister named Rev. Charles Cook and his wife Annie Mae. He had seven siblings.

In 1933, the family moved to Chicago where he attended ‘Doolittle Elementary’ and later ‘Wendell Phillips Academy High School.’ He began his musical career at the age of nine when he joined a group called ‘The Singing Children’ along with his siblings. At the age of 14, he became the lead singer of a gospel group called ‘The Highway Q.C.’s.’

His early works were inspired by a popular gospel group called ‘The Soul Stirrers.’ In 1950, he got an opportunity to join the same group as their lead singer. 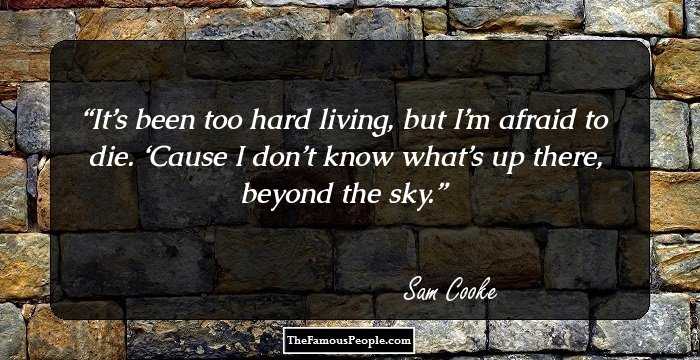 Sam Cooke facilitated a deal between ‘The Soul Stirrers’ and ‘Specialty Records,’ recording his first song ‘Jesus Gave Me Water’ in 1951. This was followed by other gospel songs like ‘How Far Am I from Canaan?,’ ‘Peace in the Valley,’ ‘One More River,’ ‘Jesus Paid the Debt,’ etc. He wrote most of these songs and caught the attention of young audience.

He remained with ‘The Soul Stirrers’ for the next six years before exploring secular music. His first single ‘Lovable’ (remake of the gospel song ‘Wonderful’) was released in 1956 under his stage name ‘Dale Cook.’ In 1957, he signed a deal with ‘Keen Records’ and released his first number one hit ‘You Send Me’; the song was No. 1 on ‘Billboard R&B’ chart for six weeks. Around this time, he also sang ‘Only Sixteen’ and ‘Everybody Loves to Cha Cha Cha.’ Amidst growing popularity, he appeared on ABC's ‘The Guy Mitchell Show.’

Being a business enthusiast, he established a publishing company for his music in 1959. He also signed a profitable contract with RCA in 1960 and delivered the hit single ‘Chain Gang.’ The song occupied the second position on Billboard pop chart. He also secured the ownership of his master recordings.

In 1961, he established his own record label called ‘SAR Records,’ in collaboration with J.W. Alexander and Roy Crain. In the process of working with other artists, he enhanced the careers of Bobby Womack, Johnnie Taylor, and Billy Preston.

Like other R&B artists of that era, he stressed on the importance of singles, holding 29 US top 40 hits on pop charts, and more on R&B charts. He was a creative writer and his songs were sometimes social commentaries. 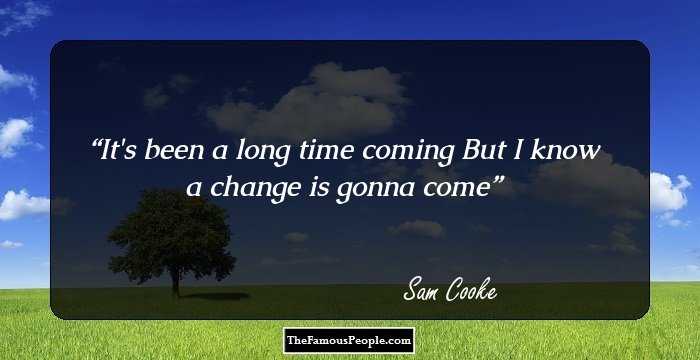 Sam Cooke’s single ‘You Send Me’ was released on September 7, 1957 by ‘Keen Records.’ It received huge commercial success. It topped Billboard 's ‘R&B Records’ chart and ‘Billboard Hot 100’ chart. It was also ranked 115th in ‘Rolling Stone’ magazine's ‘The 500 Greatest Songs of All Time’ list in April 2010.

His single ‘Twistin' the Night Away’ was released on January 9, 1962 by ‘RCA Victor.’ It peaked at the first position in Billboard's R&B chart and ninth position in ‘Billboard Hot 100.’ It also occupied the sixth position on the ‘UK Singles Chart.’

�‘A Change Is Gonna Come’ was released in February 1964 by ‘RCA Victor.’ The song was inspired by various personal events and highlights the struggles of African-Americans. It became an anthem during the ‘Civil Rights Movement’ and is considered to be “culturally, historically, or aesthetically important.”

In 1986, Sam Cooke was posthumously inducted as a charter member of the ‘Rock and Roll Hall of Fame.’ The following year, he was inducted into the ‘Songwriters Hall of Fame.’

In 1999, he was posthumously honored with the ‘Grammy Lifetime Achievement Award’ for his valuable contribution to music.

In 2008, ‘Rolling Stone’ named him the fourth ‘Greatest Singer of All Time.’

Cooke was inducted into the ‘National Rhythm and Blues Music Hall of Fame’ at the ‘Cleveland State University’ in 2013. He is also an inductee of the ‘Mississippi Musicians Hall of Fame.’ 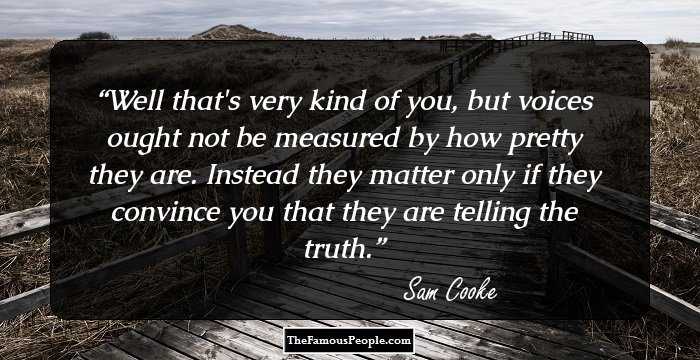 Sam Cooke was married twice. His first wife was singer-dancer Dolores Elizabeth Milligan Cook, who died in a car accident in 1959. They were divorced at the time of her death.

He died on December 11, 1964, at the age of 33, leaving behind a marvellous musical legacy. He was fatally shot by Bertha Franklin, the manager of ‘Hacienda Motel,’ Los Angeles, following an altercation. She later stated that her action was nothing more than self-defense. The court later ruled his death as justifiable homicide. Since then, the circumstances of his death have been questioned by his near and dear ones.

A portion of East 36th Street in Chicago, where he sang as a teenager, has been renamed ‘Sam Cooke Way’ in his honor.

See the events in life of Sam Cooke in Chronological Order