Safaree Samuels is an American rapper, songwriter, actor, and television personality. He is best known as one of the cast of the ‘VH1’ reality show, ‘Love & Hip Hop: Hollywood.’ He started his musical career with a group named the ‘Hoodstars.’ After the group disbanded, he joined fellow rapper and artist Nicki Minaj as her hype man. He also worked as co-executive producer of Nicki’s album ‘Pink Friday: Roman Reloaded’ (2012). He and Nicki were also in a long-term relationship before they had a much publicized breakup, in 2014. As a solo artist, Samuels released his first mixtape, ‘It Is What It Is,’ in 2015. He released his second mixtape, ‘It Is What It Is, Vol.2,’ at the end of 2015. His next mixtape ‘Real Yard Vibes’ came out in 2017, followed by ‘Fur Coat Vol.1’ later in the same year. As a TV personality, Safaree made an appearance in the second season of ‘K.Michelle: My Life’ in 2016. In August 2017, it was also announced that Samuels will be seen in the first season of ‘VH1’s ‘Scared Famous.’ New Yorkers Musicians
Tall Celebrities
Tall Male Celebrities
Male Singers
Early Career
His music career began in the early 2000s when he joined a music group ‘the Hoodstars.’ The other members of the group were Nicki Minaj, 7even Up, and Lou$tar.
The group tasted success when their single, ‘Don’t Mess with Me,’ was featured on the album ‘Theme Addict: WWE The Music, Vol. 6,’ in 2004. The song also became the entrance music of ‘WWE’ diva, ‘Victoria.’
After gaining success together, the group finally split to work on their individual solo careers. When Nicki Minaj decided to become a solo artist, Samuels helped her as a hype man.
Recommended Lists:

Male Rappers
Cancer Rappers
Cancer Singers
Male Musicians
Career
In 2010, the duo wrote ‘Did It On’em’ for Nicki’s debut studio album, ‘Pink Friday.’ The track sold more than 500,000 copies in the US alone, and peaked at number 3 on the ‘R&B/Hip-Hop Songs’ chart.
He was also featured in Nicki’s music video ‘Stupid Hoe,’ in 2012. He was the co-executive producer and A&R co-coordinator for her second album, ‘Pink Friday: Reloaded,’ that came out in 2012.
He had six writing credits in the album. Samuels was again featured in Minaj’s music video ‘Press Conference.’
After parting ways with Minaj in 2014, Samuels started working on his own rap and hip hop career, and released his first single called ‘Burner’ from his self-titled EP at the end of 2014. He released his first mixtape, ‘It Is What It Is,’ on April 7, 2015, under the label ‘Stuntgang.’
His debut mixtape featured artists such as Philly Swain, Travis Kr8ts and Ward 21. He released ‘It Is What It Is, Vol. 2’ on December 7, 2015 and featured artists such as ‘Bounty Killer.’
In July 2017, he released his next mixtape ‘Real Yard Vibes.’ He released his fourth mixtape, ‘Fur Coat Vol.1,’ in November 2017.
Continue Reading Below
He has collaborated with several artists including K. Michelle and Sean Kingston.
Samuels made his TV debut in Nick Canon’s ‘Wild ‘n Out’ in 2015.
In 2016, he appeared in 3 episodes of the reality show ‘K.Michelle: My Life.’ In the same year, he joined the cast of ‘VH1’s reality show ‘Love & Hip Hop: Hollywood.’
In 2017, he joined the main cast of ‘Love & Hip Hop: Hollywood.’ In 2017, he was one of the contestants in another horror reality show ‘Scared Famous.’
In 2018, he joined the support cast of ‘Leave It To Steavie.’ He also appeared in ‘Wild Safaree’ as part of the main cast.
In February 2018, Safaree was honored with a ‘Blue & Bougie Impact Award.’
Recommended Lists:

Cancer Musicians
American Rappers
American Singers
Jamaican Singers
Personal Life
Samuels and Nicki Minaj were together for a long time. The couple started dating sometime around 2002 and parted ways in 2014.
Nicki’s songs such as ‘Bed of Lies,’ ‘Phil N Potions,’ and ‘The Pinkprint’ were rumored to be about Samuels. After his break up with Nicki, he dated model Zashia Santiago.
He’s also been linked to models like Candice Brooks, Analicia Chaves and Nikki Mudarris. In 2017, he dated model Star Divine but soon they went their separate ways.
He was also allegedly assaulted by Divine which resulted in Samuels being hospitalized for a while.
Recommended Lists:

See the events in life of Safaree Samuels in Chronological Order 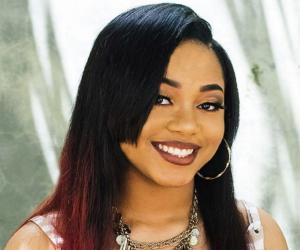