(One of the Best-Selling Rappers of All-Time)

Advanced Search
Armando Christian Pérez, popularly known by his stage name Pitbull, is an illustrious American singer cum rapper, who hails from Miami, Florida, USA. Of all the success and fame he enjoys and relishes today, his childhood was just the contrary. His parents, emigrants from Cuba, split up when he was just a toddler and hence he was solely raised by his mother and later on by a foster family from Roswell, Georgia when his mother kicked him out on finding out that he had started peddling drugs just like his father. If not for his parents insistence on being in contact with his Cuban roots, he wouldn't have heard of Jose Marti—the Cuban national hero and poet—at the age of three, and would have never found the effectiveness and capacity of simple word power. After completing his graduation, he immediately set focus on his music. He was particularly influenced by Celia Cruz and Willy Chirino and drawn to Miami Bass genre of pop music called Crunk. Lil Jon, accepted as the master of Crunk, launched him in the album 'Kings of Crunk' in 2002. An international star in the true sense, he's worked alongside Lil Jon, Eminem, 50 Cent, Afrojack, NeYo, Ying Yang Twins, Twista, Adassa, JLo, etc.

Cardi B
DID WE MISS SOMEONE?
CLICK HERE AND TELL US
WE'LL MAKE SURE
THEY'RE HERE A.S.A.P
Quick Facts

American People
Hip Hop Singers
American Men
Male Rappers
Male Singers
Childhood & Early Life
Pitbull was born on January 15, 1981, to Cuban emigrants, in Miami, Florida. His parents divorced when he was young and he was supported by his mother alone.
Jose Marti, a Cuban national hero and poet, influenced him and even at the age of 3, he could recite his most famous works. He believes his high music acumen and popularity comes from the fact that he spent his childhood listening to Salsa, Merengue, Bachata, Bass Music, Hip-Hop, Techno, House and Rave.
He completed his education at South Miami Senior High School and graduated from Miami Coral Park High School. Immediately, he was steadfast on focussing entirely on his rapping. 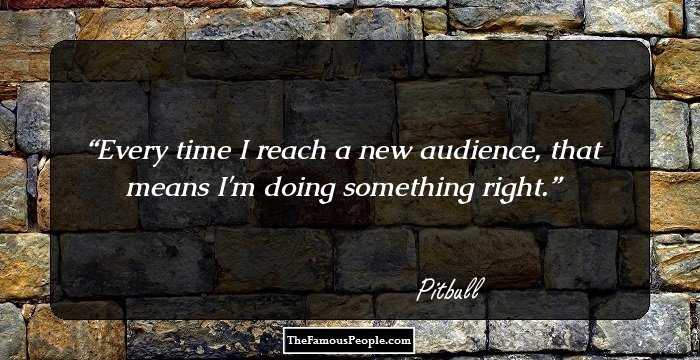 Quotes: Time, I
Continue Reading Below
Career
Lil Jon, already an accomplished singer, gave Pitbull his first rapping break in his 2002 album, 'Kings of Crunk'.
In 2004, came out ‘M.I.A.M.I. (Money Is A Major Issue)’, his first solo album with TVT Records, and Lil Jon and Jim Jonsin as the producers. Some chart topping tracks from the album are: “Culo”, “Dammit Man”, ‘Back Up”, “Toma” and “That's Nasty”.
A remixed version of M.I.A.M.I. came out in 2005, named 'Money Is Still A Major Issue' with just one new track “Everybody Get Up”, featuring Pretty Ricky.
On October 31, 2006 came out his second album ‘El Mariel’. This is the same boat that was mentioned in the Al Pacino Epic 'Scarface'. Also, he dedicated this album to his father, who had passed away in May the very same year. Some chart topping tracks from the album are: “Bojangles”, “Ay Chico”, “Fuego” and “Dime”.
In November 2007, came out his third album ‘The Boatlift'. Some famous singles and collaborations in the album are: “Secret Admirer” with Lloyd, “Go Girl” with Trina, “The Anthem” with Lil Jon and “El Africano” with Wilfrido Vargas.
In 2009, he teamed up with Ultra Records, after his older label TVT Records, went out of business, for his fourth album, ‘Rebelution’. Some famous tracks from the album are: “I Know You Want Me”, “Hotel Room Service”, “Shooting Star” and “Blanco”.
In 2010, he did several collaborations. Noteworthy amongst them being, “Somos El Mundo” (We Are The World) with Emilio and Gloria Estefan. “Heart, Beat, Love” with Janet Jackson. “Armada Latin” in the album ‘Rise Up’ with Cypress Hill (Latin rap legend), “All Night Long” with Alexandra Burke, and “DJ Got Us Fallin in Love" with 'Usher'.
On November 2, 2010 came out his fifth album, ‘Armando’. This was his debut Spanish-language album.
In April, 2011, he featured in two singles with Jennifer Lopez in her album 'Love?'; they are: “Fresh Out The Oven” and “On The Floor”.
Continue Reading Below
On June 21, 2011 came out his sixth album titled ‘Planet Pit’. "Hey Baby", featuring T-Pain was the first single and was instantly a huge hit. “
On November 19, 2012 came his seventh album titled ‘Global Warming’ annotating the similarities between the two. The album featured singles such as, "Get It Started" with Shakira and "Feel This Moment" with Christina Aguilera. The second single “Back In Time” was for the hit movie franchise 'Men In Black 3 : Back In Time'.
In 2013, Pitbull released a Diss Track on Lil Wayne after the former spoke badly of him.
On November 25, 2013 came Global Warming's next extended play ‘Global Warming: Meltdown’ featuring Kesha, Kelly Rowland, Inna, Mohombi and Mayer Hawthorne. The most talked about single being "Timber".
On November 24, 2014 came his eight album, 'Globalization' and around the same time came tracks like "Wild, Wild Love", "Fireball" and "Time Of Our Lives"
For his constant grooving and pop tracks, he received humungous crowds for his concerts, which were 'Rebelution Tour'(2009-11), 'Planet Pit World Tour'(2012), 'North American Tour' (2013), 'Pitbull and Enrique Iglesias Tour'(2014) and finally 'Pitbull Live in Hong-Kong'(2015). 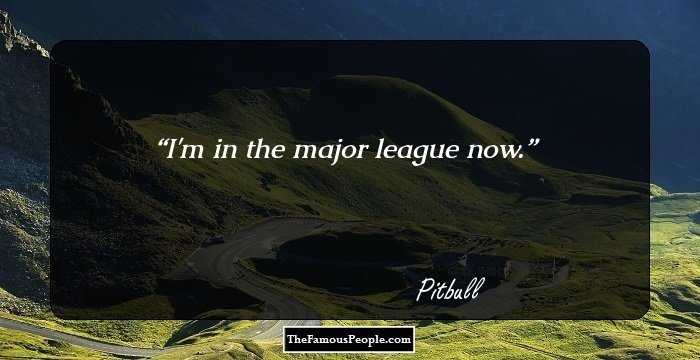 Major Works
Pitbull delivered chart-busters like "Give Me Everything" which topped the Billboards top 100', and “Hey Baby”, which went till the 7th spot,
‘El Mariel’ (His second album) was at the pole position on the Billboard independent albums chart, number 17 on the Billboard 200 and second on the rap chart.
“I Know You Want Me” was charted at second position on the Hot 100.
Awards & Achievements
The city of Miami honoured Pitbull with a ‘Key to the City’ on August 19, 2009
In June 2014, it was announced that Pitbull would be receiving a star on the Hollywood Walk of Fame. 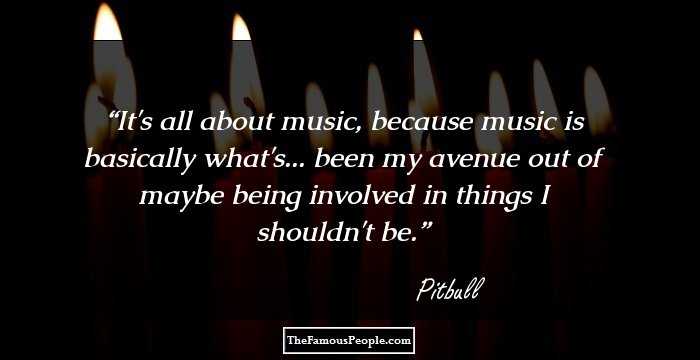 Quotes: Music, I
Personal Life & Legacy
He helped build the Sports Leadership and Management Charter Middle/High School in Miami's Little Havana, the neighborhood where he grew up.
Trivia
He chose his stage name as Pitbull, after the dog species pitbull because according to him the dog species characterise basically everything that he stands for.

See the events in life of Pitbull in Chronological Order