Russell Edward Brand is a British comedian, television presenter, radio host, actor, and author. He is known for his comic timing, impeccable wit while hosting radio and television shows, controversial satirical take on celebrities, politicians, sex, promiscuity, and drugs. He is also known for leading a wild lifestyle. Brand has often been featured on tabloids for his innumerable relationships, heroin and alcohol addiction, and objectionable behavior for many years of his life. His behavior has often been linked to his tormenting childhood. The things that he faced as a child made him an addict and a social outcast, and he suffered from conditions like bulimia nervosa, attention deficit hyperactivity, and bipolar disorder. On professional front, he started out as a stand-up comedian and his skills were soon recognized by ‘MTV’ and ‘BBC’ and there was no looking back after that. Brand has done numerous radio shows, television shows, movies, and hosted many award functions. Though he has overcome his drug abuse problem, he continues to be controversy's favorite child. British People
Comedians
British Men
Tall Celebrities
Tall Male Celebrities
Childhood & Early Life
Russell Brand was born on June 4, 1975, in Essex, England, to Ronald Henry Brand and Barbara Elizabeth Nichols. His father is a famous photographer. His parents got divorced when he was only six months old. His mother raised him single-handedly.
Brand had a tough childhood which led to a tougher adolescence. He was sexually abused by his tutor when he was young and his mother contracted breast and uterine cancer when he was only eight.
Owing to his mother’s failing health, Brand lived with his relatives. By the time he turned 14, it was confirmed that he suffered from bulimia nervosa. These things contributed to his drug addiction.
He attended ‘Grays School Media Arts College.’ He later went to the ‘Italia Conti Academy’ in 1991, but was expelled in his first year for using illegal drugs and not paying enough attention to studies. 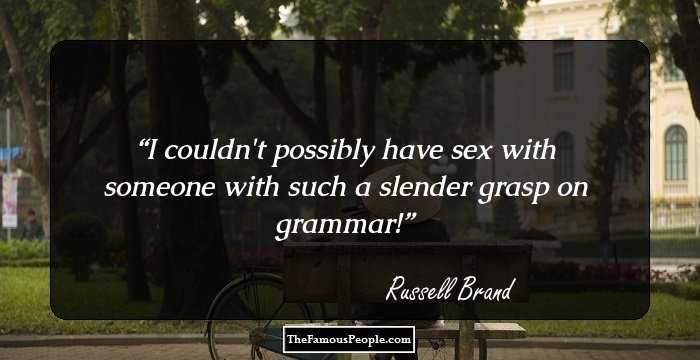 Who Is The Most Popular BTS Member?
Career
Brand always had a creative bent of mind and an inclination towards humor. In 2000, he showcased his talent for the first time in public by doing a stand-up at the ‘Hackney Empire New Act of the Year.’
The same year, Brand got an opportunity to work as a video journalist on MTV’s ‘Dancefloor Chart.’ He visited various nightclubs in Ibiza and England for the show and also hosted ‘Select.’
He left ‘MTV’ in 2002 and made ‘RE:Brand,’ a documentary and comedy television program on cultural taboos. Brand hosted the documentary, which was his creative vision, alongside Matt Morgan. He also appeared on ‘Cruise of the Gods’ and ‘White Teeth.’
Brand became famous when he hosted ‘Big Brother's Eforum’ in 2004. He also performed in the Edinburgh Festival ‘Better Now’ where he discussed his heroin addiction. He did another show titled ‘Eroticised Humour’ the following year.
In 2005, he was flooded with opportunities to perform on television. Subsequently, he played ‘Tommy’ in the ‘BBC’ sitcom ‘Blessed.’ Around that time, he also appeared on a British TV debate comedy show titled ‘Russell Brand’s Got Issues’ which was aired on ‘E4 Network.’
‘The Russell Brand Show,’ aired on ‘BBC Radio 6 Music’ in 2006, made him a household name. He hosted the show alongside Morgan, and their timing and queer pranks became famous.
Brand started receiving more hosting and presenting opportunities because of his humor and wit. In 2006, he presented the ‘NME Awards.’ The following year, he hosted the ‘BRIT Awards.’
The duo of Brand and Morgan was in demand as their personalities complemented each other, and they did another creative project together. They presented a documentary titled ‘Russell Brand on the Road’ in 2007.
Around the same time, he landed his first major role in a movie titled ‘St. Trinian’s.’ Also, he caught the attention of the American audience with his charm, wit, and acting skills in the movie ‘Forgetting Sarah Marshall.’
Continue Reading Below
In 2008, he hosted the ‘MTV Video Music Awards’ (VMA) amid doubts whether he would be able to catch the attention of American audience. It turned out to be the most controversial VMAs ever as he degraded celebrities like George Bush, Jonas Brothers, etc. However, the controversy helped increase the viewership of the show.
In 2008, he started his own production company ‘Vanity Projects’ and released ‘Russell Brand Doing Life.’ The following year, he received another opportunity to host ‘MTV Video Music Awards’ for the year 2009.
From 2008 to 2010, he established himself as a prominent film actor as he starred in movies, such as ‘Bedtime Stories’ and ‘The Tempest.’ He also appeared in the lead role in a film titled ‘Get Him to Greek.’
In 2011, Brand did a romantic comedy film called ‘Arthur,’ which was a remake of the 1981 film. The movie did commercially well, and he was nominated at the ‘Teen Choice Awards.’
His production business flourished along with his television and film career, encouraging him to start another production company called ‘Branded Films,’ which he started along with his friend Nik Linnen in 2011. The company was primarily established to produce films that Brand stars in.
In 2012, Brand appeared in the film adaptation of the musical ‘Rock of Ages.’
Brand was interviewed in 2013 by Jeremy Paxman on BBC's ‘Newsnight’ during which he was repetitively interrogated about his call on the concept of ‘revolution’ which he openly professes. He then went on to become a guest-editor of ‘New Statesman’ magazine.
In 2012, he appeared in the ‘BBC’ documentary ‘Russell Brand: From Addiction to Recovery’ and later in ‘Russell Brand: End the Drugs War’ (2013), revealing his problems with addiction. He also spoke about his recovery.
He voiced the character of ‘Dr. Nefario’ in the animated comedy film ‘Despicable Me 2’ in 2013. He later did cameos in documentaries, such as ‘A Royal Hangover’ (2014) and ‘The Emperor’s New Clothes’ (2015).
Continue Reading Below
In 2016, he voiced the character of ‘Creek’ in the blockbuster hit movie ‘Trolls.’ The same year, he portrayed God in the comedy film ‘Army of One.’ He made guest appearances on shows, such as ‘Hospital People’ (2017) and ‘Celebrity Juice’ (2018). He landed the recurring role of ‘Lance’ in the comedy-drama ‘Ballers’ in 2018.
After appearing in the sports drama movie ‘The Fight’ in 2018, he was cast to play ‘Tristan’ in the family fantasy movie ‘Four Kids and It.’ 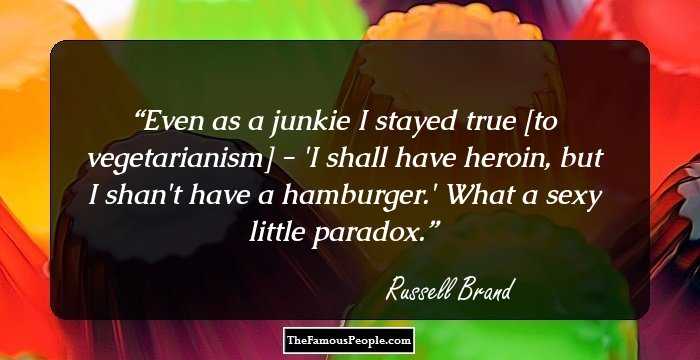 Quotes: I
Major Works
Brand became a known figure in the industry with ‘The Russell Brand Show,’ which aired on ‘BBC Radio.’ It aired from 2006 to 2008, and he hosted the show with Matt Morgan. It won the ‘Podcast of the Year’ award in 2007.
Awards & Achievements
For his incredibly funny as well as controversial stand-up shows, Brand has won ‘Time Out’ award (2006) and ‘Loaded Laftas’ (2006). For his hosting skills, he was honored at the 33rd ‘Annual Television and Radio Awards’ (2007). 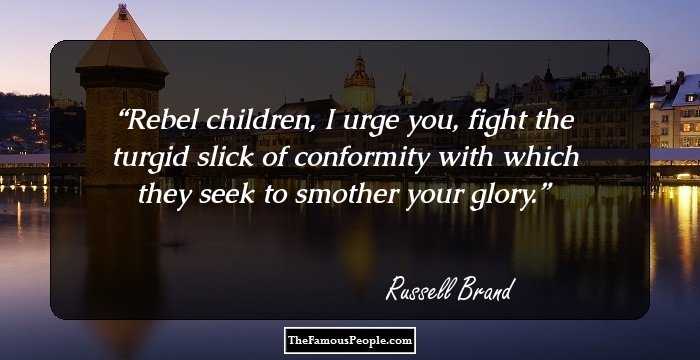 Quotes: You, Children, I
Personal Life & Legacy
Brand got engaged to singer-actor Katy Perry in 2009 after meeting her for the first time on the sets of ‘Get Him to Greek.’ They got married within a year in India on October 23, 2010. However, on 30 December 2011, he filed for divorce which was finalized in July 2012.
From 2013 to 2014, he was in a relationship with British film producer and editor of ‘New Statesmen,’ Jemima Khan.
He began a relationship with Scottish blogger Laura Gallacher in 2015 and they welcomed their first daughter Mabel on November 2016. The couple tied the knot on 26 August 2017, and welcomed their second daughter on July 2018.
He wrote his first memoir ‘My Booky Wook’ in 2007. The memoir serves as his autobiography. This was followed by his second memoir ‘Booky Wook 2’ in 2010. His first non-fiction book ‘Revolution’ was published in 2014.
Trivia
This popular British stand-up comedian has been arrested several times due to his addiction to heroin and alcohol.
He suffers from attention deficit hyperactivity disorder and bipolar disorder.

Quotes By Russell Brand | Quote Of The Day | Top 100 Quotes

See the events in life of Russell Brand in Chronological Order