(King of the Cowboys)
Advanced Search Leonard Franklin Slye, famously known as Roy Rogers, was an American cowboy actor and singer who glorified the cowboy era in Hollywood with his charming singing and action-packed acting. To this date, he remains the number one artist in the world who is associated with heavy merchandising and marketing, all owing to his success from his trademark show ‘The Roy Rogers Show’ on the television. It ran for nine years and starred his wife Evans and Pat Brady along with his horse and dog, making it an iconic success amongst young children and adults alike. Rogers has worked in many cowboy movies and throughout his career remained at par with his competitor cowboy actor Gene Autry–– it would suffice to say that there were times when he surpassed him and was known as the sole ‘King of the Cowboys’ on the silver screen. Rogers’ humble background and the financial adversities that he faced when he was young did not stop him from becoming a matinee sensation and an American legend; rather he realized his love for music right in the middle of the Great Depression. For his contribution to television, cinema and radio, Rogers was twice inducted into the Western Performers Hall of Fame at the National Cowboy & Western Heritage Museum, Oklahoma. Austin Butler
Actors #1499
Film & Theater Personalities #3158
Continue Reading Below
DID WE MISS SOMEONE?
CLICK HERE AND TELL US
WE'LL MAKE SURE
THEY'RE HERE A.S.A.P
Quick Facts

American Celebrities
Ohio Actors
Scorpio Actors
American Actors
American Film & Theater Personalities
Childhood & Early Life
Roy Rogers was born on November 5, 1911 in Cincinnati, Ohio, to Andrew and Mattie Slye. His father was disgruntled with his life in the city and his job and therefore built a houseboat along with his brother and sailed up to Portsmouth.
For a more stable life, Rogers’ family bought a land in Portsmouth and parked the houseboat on the property because of the flood of 1913 in Ohio. His father tried farming and then working at the shoe factory to support the family.
Rogers went to school in McDermott in Ohio and returned back to Cincinnati with his family when he was 17. He left school in the middle to work with his father at the shoe factory.
He then became a truck driver with his father in California, living in a small house near his sister Mary and her husband’s house. But soon the Great Depression in 1930 took away everything and Roy had to live in worker campsites.
Roy realized his love for guitar and singing in the adversity of poverty and told his father that he wanted to pursue music for living. He left for Los Angeles with his Cousin Stanley Slye and performed music as ‘the Slye Brothers’. 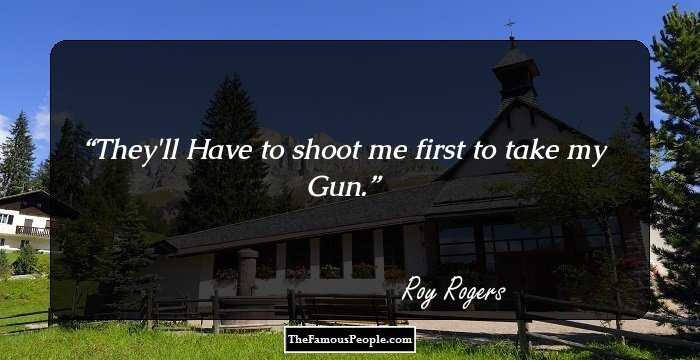 Who Is The Most Popular BTS Member?
Career
In 1932, Rogers went on a musical tour with ‘O-Bar-O Cowboys’ and did gigs at the New Mexico radio station. In the following years, he worked with a Western cowboy music group, with whom he later formed the group ‘Sons of the Pioneers’.
Throughout 1934, the group ‘Sons of the Pioneers’ produced hit songs like ‘Cool Water’ and ‘Tumbling Tumbleweeds’ and in the following year, he made many appearances as a singing cowboys in films like, ‘Slightly Static’, ‘The Old Homestead’, etc.
Rogers adopted his screen name ‘Roy Rogers’ in 1938 and little did he know that he would soon become an American idol when he was selected to replace Gene Autry. He did movies like, ‘Under Western Stars’, ‘Billy the Kid Returns’, etc.
Throughout 1939, Rogers gave hits like: ‘Rough Riders’ Round Up’, ‘Southward Ho’, ‘Frontier Pony Express’, ‘In Old Caliente’, ‘Wall Street Cowboy’, ‘The Arizona Kid’, ‘Jeepers Creepers’, ‘Saga of Death Valley’, and ‘Days of Jesse James’.
Rogers played a supporting role in the John Wayne classic ‘Dark Command’ in 1940, which made him into a bigger box office sensation. In the same year, ‘Young Buffalo Bill’, ‘Colorado’, etc. were released, making him a cowboy craze.
From 1939-1954, he made it to the Motion Picture Heralds’ Top Ten Money-Making Western Stars Poll and was listed in it for 15 years at a stretch. During this time he gave hits like, ‘King of the Cowboys’, ‘Song of Nevada’, etc.
‘The Roy Rogers Show’, which ran from 1951-1957, made Rogers a household name with his charming portrayal of a ranch owner. He worked along with his wife Evans and Pat Brandy. His horse Trigger and dog Bullet were also in the series.
Soon Roger’s phenomenon cowboy acting made him hit amongst children and he encashed it by buying rights to his name and persona and then there were Roy Rogers action figures, adventure novels and all sorts of merchandise in the market.
In 1962, Rogers and his wife Evan co-hosted a comedy-western-variety program ‘The Roy Rogers and Dale Evans Show’. It had a good start but the ratings of the show dropped down after three months and the show was scratched out.
Continue Reading Below
Rogers kept making appearances on the television and did cameos for the motion pictures throughout the 1970s - he made a popular guest appearance on ‘Wonder Woman’s’ episode ‘The BushWackers’ in 1977.
In the early 1970s, he sold the rights to his name to the Marriott corporation and they used his name, which represented his stature, popularity and fan following, to convert their Hot Shoppes locations to ‘Roy Rogers Restaurants’.
Towards the later part of his career, he concentrated more on his Hollywood Production company, which handled his own series and movies as well as took undertakings like CBC western series ‘Brave Eagle’. 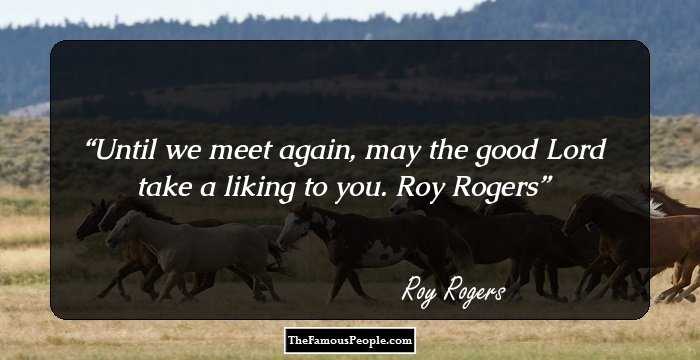 Major Works
Although Rogers became an American idol and an iconic cowboy superstar the moment he stepped in the industry but the peak of his success was during the time ‘The Roy Rogers Show (1951-1957)’ ran on the television.
Awards & Achievements
For his brilliant contribution to the Hollywood cinema and glorifying the cowboy era, Rogers received a star on the Hollywood Walk of Fame, second star for his singing and contribution to the radio and third star for his contribution to the television.
With the popularity from ‘The Roy Rogers Show’, Rogers and Evans were inducted into the Western Performers Hall of Fame at the National Cowboy & Western Heritage Museum, Oklahoma in 1976. He was again inducted as a member of the ‘Sons of Pioneers’. 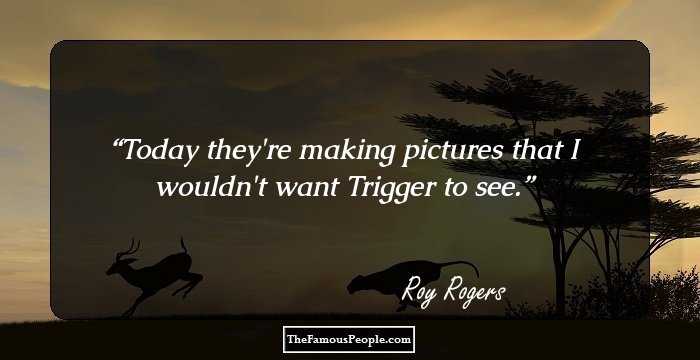 Quotes: I
Personal Life & Legacy
Rogers met with his first wife Grace Arline Wilkins while he was performing at the New Mexico radio station. They were married from 1936-1946 and had two children Cheryl Darlene and Roy, Jr. together. Grace died during child birth.
He was married to actress Dale Evans from 1947 until his death. Three years after their marriage, their daughter, Robin Elizabeth, was born. She was born with Downs Syndrome and died at the age of two. They adopted 7 children together.
Rogers died of congestive heart failure on July 6, 1998 in California and three years later his wife Dale Evans also passed away. He is buried at the Sunset Hill Cemetery.
Trivia
Rogers and his second wife Evans believed in charity and were operators of many children’s charities. It is said that they were emotional about the social welfare of young children because of the sad demise of their young daughter.
His well-bred racehorse, Triggairo, won around 13 races in its racing career.
Rogers believed that John Steinbeck’s ‘The Grapes of Wrath’ is an honest depiction of the times when people were struggling with finances and living in worker campsites during the Great Depression as he himself faced the adversity of it during his youth.

See the events in life of Roy Rogers in Chronological Order