Sir Roger George Moore was an English actor, best known for playing British secret agent ‘James Bond’ in seven feature films. He was the longest-serving ‘Bond’ in the history of ‘James Bond’ movies as he portrayed ‘James Bond’ from 1973 to 1985. Roger Moore started his career with ‘Royal Academy of Dramatic Art’ in England and appeared in small-time roles in movies. He had to take a break from acting as he was conscripted for national service shortly after the end of the ‘Second World War.’ He returned to pursue a career in entertainment and started his modeling career, which helped him land supporting roles in some high budget movies. It was after appearing on the British television ‘Ivanhoe’ that Moore started hogging the limelight for the first time. However, he did not taste international success until he appeared on ‘The Saint’ in the 1960s. It was in 1973 that he was cast as ‘James Bond’ for the first time, succeeding Scottish actor Sean Connery. He played ‘Bond’ for many years and gained success playing the famous fictional spy. Playing his first ‘Bond’ role at the age of 45 in ‘Live and Let Die,’ he was the oldest actor to have ever signed a contract to appear as ‘Bond’ in the popular film series. For his contribution to the film industry, Moore was honored with the ‘Commander of the Order of the British Empire.’ He was later honored with ‘Knight Commander of the Order of the British Empire.’ British Celebrities
Royal Academy Of Dramatic Art
Tall Celebrities
Tall Male Celebrities
Libra Actors
Childhood & Early Life
Roger Moore was born on 14 October 1927, in Stockwell, London, England, to George Alfred and Lillian Moore. His father was a policeman, while his mother was a housewife. Moore went to ‘Battersea Grammar School.’
During WWII, he was sent to Devon and was later enrolled at ‘Dr Challoner’s Grammar School’ in Amersham, Buckinghamshire. He then went to the ‘College of the Venerable Bede’ at the ‘University of Durham.’
Before joining the services, Moore worked briefly at the ‘Royal Academy of Dramatic Art’ and was used as an extra in Brian Desmond Hurst’s ‘Trottie True.’ He also made an appearance in the movie ‘Caesar and Cleopatra’ (1945).
When Moore turned 18, he was recruited to the national service and later commissioned into the ‘Royal Army Service Corps’ as a second lieutenant. He was eventually made a captain. 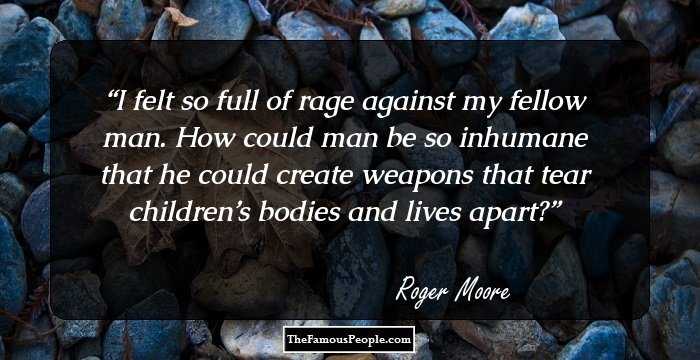 Quotes: I
Continue Reading Below
Career
During the early-1950s, Moore worked as a print model for products like knitwear, toothpaste, etc. During this time, he also made a television appearance in the series ‘Drawing Room Detective.’
He signed a contract with ‘MGM’ and appeared in movies like ‘Interrupted Melody’ (1955), ‘The King’s Thief’ (1955), ‘Diane’ (1956), etc. He then signed a contract with ‘Warner Bros’ and appeared in TV programs, such as ‘The Third Man’ and ‘Alfred Hitchcock Presents.’
Moore gained popularity playing ‘Sir Wilfred of Ivanhoe’ in the series ‘Ivanhoe’ from 1958 to 1959. The show was aimed at younger audience.
He then landed an important role in ‘The Alaskans,’ which ran from 1959 to 1960. The show was aired for one season, which consisted of 37 episodes.
In 1959, Moore was cast as ‘Beau Maverick’ in a TV series titled ‘Maverick.’ The series ran for a season and Moore had to manage his time as he was working on ‘The Alaskans’ simultaneously.
Moore finally achieved his much-awaited stardom when he was cast in ‘The Saint’ in 1962, where he played the role of ‘Simon Templar.’ The show ran for six seasons and had 118 episodes; it was the longest-running series on British television.
Just after the series ended, Moore starred in two movies, ‘Crossplot’ (1969) and ‘The Man Who Haunted Himself’ (1970). With these two motion pictures, he proved to be a versatile actor.
In 1971, he appeared on the television series ‘The Persuaders!’ The series was not a success in America but did pretty well in Europe (especially in Germany and Australia).
When Sean Connery left the ‘James Bond’ franchise, Moore was approached to play ‘James Bond’ in ‘Live and Let Die’ (1973). It is said that Moore lost weight and went for a complete makeover in order to play the role.
Continue Reading Below
Moore played ‘James Bond’ for 12 years; he was the longest-serving ‘James Bond’ actor ever. He did movies like ‘The Man with the Golden Gun’ (1974), ‘The Spy Who Loved Me’ (1977), ‘Moonraker’ (1979), ‘For Your Eyes Only’ (1981), etc.
After he stopped playing ‘Bond’ in 1985, Moore did not appear on screen for the next five years. It was only in 1990 that he appeared on television, playing an important role in the series ‘My Riviera.’
During the 2000s, he continued to work in the industry sporadically—he played the role of a homosexual in ‘Boat Trip’ (2002), appeared in a commercial for London’s 2012 Olympic bid, and guest-hosted ‘Have I Got News for You’ (2012).
He made his last film appearance when he played a cameo in the espionage thriller film ‘The Saint.’ Filmed in 2013, ‘The Saint’ was released in 2017 in tribute to Moore following his death.
Major Works
Roger Moore’s portrayal of ‘Bond’ is considered to be his most prominent work. He was the longest-serving ‘Bond’ actor and did movies like ‘Live and Let Die,’ ‘The Man with the Golden Gun,’ ‘The Spy Who Loved Me,’ ‘For Your Eyes Only,’ etc.
Awards & Achievements
Roger Moore was honored with awards like ‘Golden Globe’ (1980), ‘OTTO’ (1981), ‘Golden Camera’ (1992), ‘Tele Gatto’ (1995), ‘Monte Carlo TV Festival’ (2002), ‘Hollywood Walk of Fame’ (2007), ‘Commander of National Order of Arts and Letters’ (France) (2008), etc.
Personal Life & Legacy
Roger Moore left his first wife Doorn Van Steyn for singer Dorothy Squires, who was 12 years older than him. They lived together for some time before he left her for the Italian actress Luisa Mattioli.
He got married to Mattioli in 1969. The couple had a daughter and two sons. The marriage ran into trouble and they stopped living together in 1993. The same year, he was diagnosed with prostate cancer. Moore and Mattioli were eventually divorced in 2000.
In 2002, Moore got married to his former neighbor, a Danish-Swedish multi-millionaire named Kristina ‘Kiki’ Tholstrup. They remained married till Moore's death in 2017.
Roger Moore died of cancer on 23 May 2017, at the age of 89, in Switzerland.
Trivia
This famous British actor shared a tempestuous relationship with his first two wives as both the women used to physically assault him.
He was created’ Commander of the Order of the British Empire’ in 1999 and advanced to ‘Knight Commander of the Order of the British Empire’ in 2003.
This former ‘Bond’ actor was a Goodwill Ambassador of ‘UNICEF.’

See the events in life of Roger Moore in Chronological Order