Roger Daltrey is an English singer and actor, best known as a former member of the band ‘The Who.’ With a career spanning more than 50 years, Roger is known to be one of the most iconic figures in the English music industry. During the 1960s, the 1970s, and the 1980s, Roger was at the peak of commercial and critical success. During this period, he had 14 singles that topped many major music charts. Born and raised in Acton, London, he made his first guitar from a block of wood. He started his music career in the mid-1960s, with his own rock band. The band had Roger as its lead vocalist. In the mid-1970s, he went solo and released albums such as ‘One of the Boys’ and ‘Ride a Rock Horse.’ Roger has received several national and international honors. He was inducted into the ‘Rock and Roll Hall of Fame’ and the ‘UK Music Hall of Fame.’ Apart from that, he has also been awarded with a ‘Lifetime Achievement Award’ on behalf of the ‘British Phonographic Industry.’ He was also nominated for a ‘Golden Globe’ award for his acting debut in ‘Tommy.’ British People
Rock Singers
Lyricists & Songwriters
T V & Movie Producers
British Men
Childhood & Early Life
Roger Daltrey was born on March 1, 1944, in Acton, West London, to Harry and Irene Daltrey. Harry Daltrey served in the Second World War, as part of the British army and returned a few years after Roger was born. Roger grew up with two other siblings, in a suburban neighborhood, just like his fellow band members John Entwistle and Pete Townshend.
Roger wished for a career in music since childhood. His rebellious nature was attributed to his inclination toward rock and roll music, which shaped up his psyche greatly.
He was enrolled at the ‘Acton County Grammar School,’ and once he graduated from high school, he started his career in music in spite of his parents’ disapproval. As a teenager, his first band was ‘The Detours,’ a local band for which he auditioned with a guitar that he had made. In 1959, when his father bought him a new guitar, he became the lead guitarist in the band.
Soon, Roger started working at a sheet-metal factory. He worked at the factory during the day, and performed with his band at night. The band performed covers for artists such as ‘The Beatles’ and James Brown and became successful in their neighborhood.
By 1964, Roger had become the leader of the band, and it was eventually renamed as ‘The Who.’ The band enjoyed enormous success in the 1960s. Soon, the band started working on original music and scored a record deal. 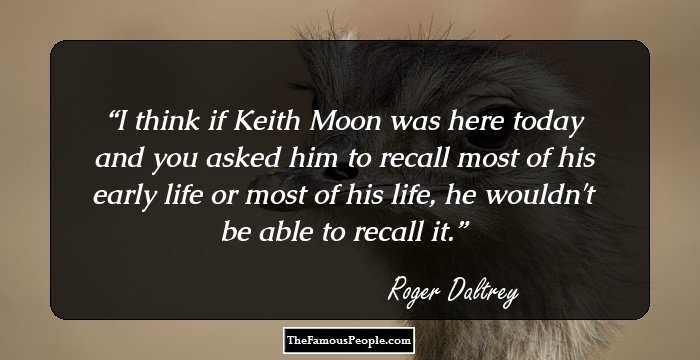 Male Singers
Pisces Actors
Pisces Singers
British Actors
Career
By 1965, ‘The Who’ had arrived in the music scene, with their hit single ‘I Can’t Explain.’ Although Roger’s violent behavior caused his ouster from the band, he was taken back within a week and was warned against behaving aggressively again. Roger apologized and stated that he would have been dead had he not been taken back into the band.
The band’s sophomore single, ‘Anyway, Anyhow, Anywhere,’ became a huge hit and helped the band achieve national and international fame. Townshend eventually became one of the most-talked-about composers in the history of rock music and Roger was the star singer. Their combination was undefeatable. Roger’s mad energy on stage was another reason behind the band’s surreal success.
The band experimented with various genres. They made rock anthems, such as ‘My Generation,’ and soft romantic ballads, such as ‘Behind Blue Eyes.’ One of the band’s early iconic successes was the rock opera, ‘Tommy,’ which was released in 1969. It told the story of a deaf, mute, and blind boy who grew above his limitations and ended up becoming a messianic figure. Roger also played the leading role in the 1975 movie based on the rock opera.
As the band continued with its mammoth successes, such as ‘Who’s Next’ and ‘Quadrophenia,’ Roger embarked on a solo music and acting career.
In 1980, Roger starred in the film ‘McVicar,’ which was also produced by him. The film was based on the life of a bank robber, John McVicar. The soundtrack of the movie was created by ‘The Who.’ In 1982, ‘The Who’ stopped touring around, owing to their multiple solo projects. Sometime later, the members stopped working together as a band. However, they did come together for each other’s solo albums, which further clarified that their friendship was unaffected.
In the 1980s, Roger’s focus shifted toward acting, and he was seen playing key roles in several films, such as ‘The Little Match Girl,’ ‘Buddy’s Song,’ and ‘Mack the Knife.’ The band reunited for their 25th anniversary tour, which Roger managed to complete, despite being busy with his acting projects.
He embarked on a solo career in 1973, with his debut album, ‘Daltrey.’ The song ‘Giving It All Away’ became a chart-topping hit. His second solo album, ‘Ride a Rock Horse,’ was more successful than the first and brought Roger fame as a solo artist too.
Roger faced immense backlash for his album ‘Parting Should be Painless,’ which was a major critical and commercial debacle. The album was an expression of the pain that Roger had suffered after the break-up of his band. Furthermore, the song ‘Under a Raging Moon’ from his album of the same name was dedicated to Keith Moon, the deceased drummer of ‘The Who.’
Roger has released eight solo albums to date and has established himself as one of the major rockstars of his generation. In 1988, he was awarded with the ‘Lifetime Achievement Award’ by the ‘British Phonographic Industry.’ In 1990, he was inducted into the ‘Rock and Roll Hall of Fame,’ and in 2005, he made it to the ‘UK Music Hall of Fame.’ 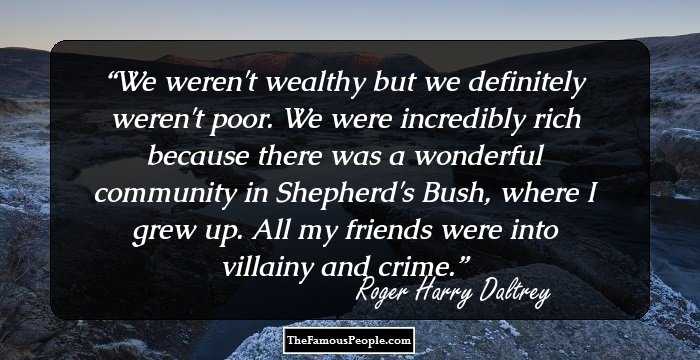 Male Musicians
British Singers
Pisces Musicians
British Musicians
Personal Life
Roger Daltrey has married twice. He married Jacqueline Rickman, his first wife, in 1964. A year later, their son, Simon, was born. Roger had a roaring affair with a Swedish model, Elisabeth Aronsson, with whom he had a son in 1967. Roger and Jacqueline eventually divorced in 1968.
In 1968, he started dating Heather Taylor. The couple got married in 1971 and had three children.
Despite media reports claiming that the musician is addicted to drugs and marijuana, Roger has stayed away from doing hard drugs. He also urges his fans not to smoke during his concerts.
Recommended Lists:

Quotes By Roger Daltrey | Quote Of The Day | Top 100 Quotes

See the events in life of Roger Daltrey in Chronological Order