Robyn Lively is an American television and film actress. She is best recognised for performing in the film ‘Teen Witch’ and in television series ‘Savannah’ and ‘Twin Peaks’. Hailing from a family of entertainers from showbiz, Robyn began her acting career as a child artist, making her screen debut with the television movie ‘Summer of My German Soldier’. She made her feature film début with the Robin Williams and Kurt Russell starrer comedy-drama ‘The Best of Times’. Her big break came with the film ‘Teen Witch’. Over the years she featured in other films like ‘Wildcats’ and ‘The Karate Kid Part III’. She made her mark on television with lead role of Lane McKenzie in the short-lived show ‘Savannah’; and recurring roles in the shows ‘Chicago Hope’, ‘Doogie Howser, M.D.’, and ‘Twin Peaks’. She also appeared in many television films like ‘Not Quite Human’ and ‘Santa Who?’. She earned an Emmy nomination for her performance as Melissa Harmon in the episode ‘Less Than Perfect Daughter’ from the American television anthology series ‘ABC Afterschool Special’. 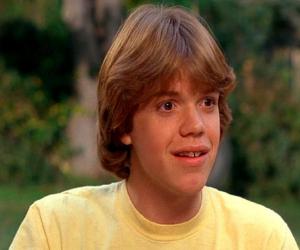 American People
Georgia Actresses
Aquarius Actresses
American Actresses
Actresses Who Are In Their 50s
Childhood & Early Life
Robyn Elaine Lively was born on February 7, 1972, in Powder Springs, Georgia, US to talent manager Elaine Lively (née McAlpin) and Ronald Otis (Ronnie) Lively. Her parents parted ways when she was a child. Her elder sister Lori is an actress, acting coach and television co-host/designer, and her elder brother Jason is a semi-retired actor.
Her mother married American actor and coach Ernie Brown in 1979. Ernie took Elaine’s surname and became Ernie Lively. Through such union, Robyn has a half-brother Eric Lively and a half-sister Blake Ellender Lively, both actors.
Continue Reading Below
You May Like

Who Is The Most Popular BTS Member?
Career
Robyn commenced acting as child actor. She made her debut on screen at age of six, when she played Sharon Bergen in the American made-for-television war drama romance film ‘Summer of My German Soldier’. The film originally aired on NBC on October 30, 1978.
Her next on-screen feature happened after a gap, in 1983, when she featured as Amanda in a single episode of the American drama television series ‘Boone’. The performance earned her Young Artist Award nomination for Best Young Actress in a New Television Series in 1984.
In 1985, she bagged another Young Artist Award nomination, this time for Best Young Actress - Guest in a Television Series for her performance as Becky Phillips in an episode of the American television series ‘Knight Rider’.
Robyn Lively made her film debut in 1986, with the American comedy-drama film ‘The Best of Times’ starring Robin Williams and Kurt Russell. She played Jaki, daughter of Robin Williams’ character, Jack Dundee, in it.
In 1986 she also starred in American sports-comedy film ‘Wildcats’ and garnered Young Artist Award nomination for ‘Exceptional Performance by a Young Actress Starring in a Feature Film - Comedy or Drama’ for the role, in 1987.
She starred as Becky Carson in the 1987 television film ‘Not Quite Human’ and reprised the role in the film’s 1989 sequel ‘Not Quite Human II’.
She played starring role of Louise Miller in the American teen-fantasy-comedy film ‘Teen Witch’ that originally released on April 23, 1989. With time it became a cult classic. It fetched her Young Artist Award nomination for ‘Best Young Actress Starring in a Motion Picture’, in 1990.
The 1989 American martial-arts-drama film ‘The Karate Kid Part III’ starred Robyn as Jessica Andrews. Other films featuring Robyn include ‘Simon Says’ (2006), ‘Letters to God’ (2010) and ‘Ouija’ (2014).
Her performance as the insecure teen Melissa Harmon in the 1991 aired episode ‘The Less Than Perfect Daughter’ from the popular ABC American television anthology series ‘ABC Afterschool Special’ earned her nomination for Outstanding Performer in a Children's Special award at the Daytime Emmy Awards that year.
She featured as Lane McKenzie, one of the three main characters of the American prime time television soap opera ‘Savannah’. It aired on The WB from January 21, 1996 to February 24, 1997.
Other television works of Robyn includes performing recurring roles in ‘Twin Peaks’ (1990-91), ‘Doogie Howser, M.D.’ (1991-93) and ‘Chicago Hope’ (1994-95); featuring in series like ‘George and Leo’ (1997-98) and ‘Gortimer Gibbon's Life on Normal Street’ (2014), and in television films like ‘Johnny Kapahala: Back on Board’ (2007) and ‘Who Is Simon Miller?’ (2011).
Family & Personal Life
Robyn Lively dated actor Jason Priestley for some time. She was also known to be romantically associated with Neil Patrick Harris for some time since 1992.
On September 25, 1999, she married American actor Bart Johnson. Together they have two sons, Baylen Johson (born 2003), and Wyatt Blake Johnson (born 2008) and one daughter Kate Johnson (born 2005). Robyn lives with her family in the Hollywood Hills.

See the events in life of Robyn Lively in Chronological Order