When Oliver Reed passed away while filming for the ‘Gladiator’, the world lost one of the most gripping and spellbinding on-screen and off-screen personalities. Since then, his catalogue of work, spanning over four decades, seems to have been largely forgotten or flouted. At the height of his career, he was Britain’s most highly paid and internationally celebrated film star and was constantly surrounded by a mammoth female fan club. However, his career hit a dead-end and he soon became known for his off-screen antics rather than his earlier film successes, which eventually led to diminishing screen presence. Whether he was brawling with the Cardinal’s guards, as Athos, in ‘The Three Musketeers’ or as Captain Billy Bones in ‘Treasure Island’, Reed was always determined to give it his best shot and remained optimistic about his wallowing acting career. His vibrant and momentous life, although now largely overlooked, is one of true determination and talent and although he could never really make a successful ‘comeback’, he is still remembered for his burly presence. His movies, ‘The Trap’, ‘Oliver!’, ‘Lion of the Desert’ and ‘Tommy Castaway went on to earn him a permanent place in the annals of Hollywood. British Celebrities
British Actors
Aquarius Actors
British Film & Theater Personalities
Aquarius Men
Childhood & Early Life
Oliver Reed was born as Robert Oliver Reed to Peter Reed and Marcia Reed in Wimbledon, London. He is believed to be a descendent of ‘Peter the Great’, the Tsar of Russia, although this has never been proved.
He attended Ewell Castle School in Surrey and later, enlisted in the Royal Army Medical Corps before commencing his acting career in the late 50s. 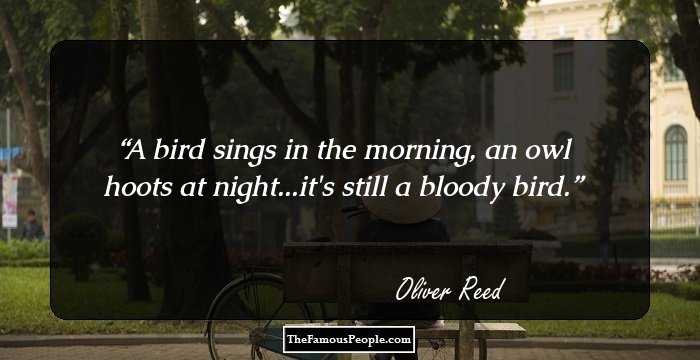 Famous Beautiful Women With Green Eyes
Career
Without any formal training, his career debuted with ‘The Golden Spur’ in 1959, which was a British kids’ series.
He landed his first major role in ‘The Curse of the Werewolf’ in 1961, where he played the role of a young man who transformed into a hairy beast during the full moon.
The following year, he appeared in ‘Pirates of the Blood River’ alongside Christopher Lee and also starred in ‘Captain Clegg’ with Peter Cushing.
In 1963, he attracted widespread fame as the lecherous gang leader in ‘The Damned’.
He was cast as a supporting actor in ‘The Brigand of Kandahar’, in 1965 and in the action-adventure film, ‘The Trap’, in 1966. However, in the 60s, his memorable performance was in the classic musical adaptation of ‘Oliver!, where he played the role of the evil, Bill Sykes.
He spent his first decade as an actor playing dependable supporting roles and soon, he began signing more projects where he was cast as the lead actor. Soon, he played the assassin in the black-comedy, ‘The Assassin Bureau’, in 1969.
In 1969, he shot to international fame after his homoerotic wrestling scene with Alan Bates in the movie, ‘Women in Love’, which not only became a subject of controversy, but was also one of the first films with a brazen depiction of male nudity.
Through the 70s, he went on to play a number of varied and challenging roles in movies like ‘The Hunting Party’, The Three Musketeers’ and ‘The Devils’, which got him internationally recognized in the film circuit, but the fame was very short-lived.
It was around this time, he joined hands with three other British actors; Richard Burton, Richard Harris and Peter O’Toole, with whom he engaged in heavy drinking, vandalism and public brawls with bystanders. This eventually affected his career, which spiraled downwards then on.
Continue Reading Below
After a few unsuccessful films, he embarked on a string of unproductive horror flicks including ‘Dr. Heckyl and Mr. Hype’, ‘The String II’, ‘Venom’ and ‘Spasms’.
He then continued to sign unsuccessful films like ‘Fanny Hill’ in 1983 and the failed screwball comedy, ‘Two of a Kind’, released in the same year.
He later, appeared as Martin Pinzon, in the two-part miniseries, ‘Christopher Columbus’ in 1985.
In 1986, he starred in the erotic thriller, ‘Castaway’, where he played a middle-aged man looking for a companion on a deserted island and receives a response from a drab, uninteresting desk clerk.
He then signed a number of other films as a supporting actor including ‘Gor’, ‘Prisoner of Honor’ and ‘The Adventures of Baron Munchausen’.
In the 1990s, he finally started getting over the addictions that had plagued his career and he appeared in ‘Return to Lonesome Dove’ in 1993. He was then cast in the well-received, ‘Funny Bones’ alongside Oliver Pratt and Jerry Lewis.
In 1999, he was cast in the historical thriller, ‘Marco Polo’ and in the comedy film, ‘Parting Shots’. He also appeared in what turned out to be his final film, ‘Gladiator’, but died before the film could get completed. He was cast as a gruff former Gladiator who transforms Russell Crowe into a champion gladiator. 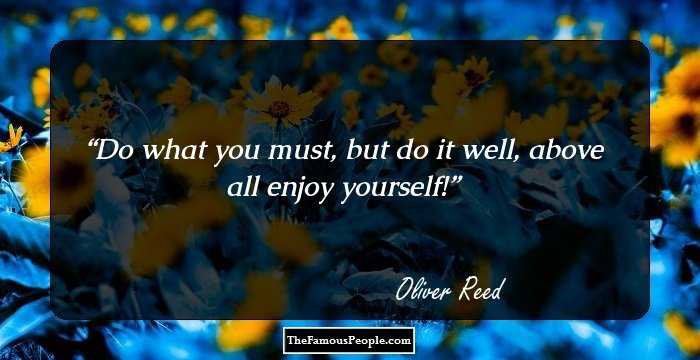 Quotes: You
Major Works
Reed was known for portraying the musketeer ‘Athos’ in Richard Lester’s film on Alexander Dumas’ classic, ‘The Three Musketeers’. His portrayal is considered to be one of the ‘most memorable roles of all times’ and he received worldwide recognition for his stellar performance. He was re-cast as Athos in its sequel, ‘The Four Musketeers’ and was also cast in the adaptation, ‘The Return of the Musketeers’.
Continue Reading Below
Awards & Achievements
He has been ranked fifth in the list of ‘most popular stars at the box office’ by British exhibitors.
He was posthumously nominated for the Academy Award for Best-Supporting Actor in the film, ‘Gladiator’ and was also nominated for the ‘Screen Actors Guild Award’. The ‘Gladiator’ won ‘Academy Award for Best Picture’, which was dedicated to the actor. 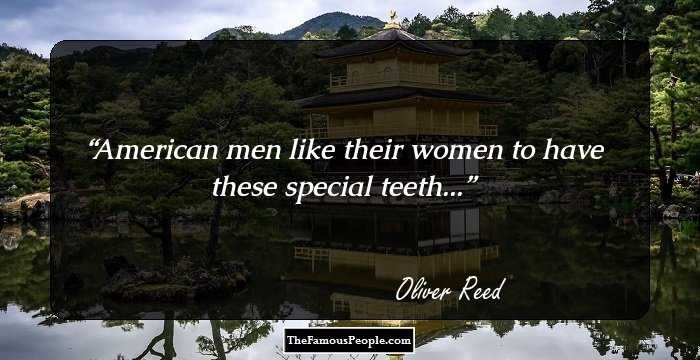 Quotes: Like, Women
Personal Life & Legacy
He married Kate Byrne in 1960 and the couple had one son, but they got divorced in 1969.
He then met Jacquie Daryl, a classical dancer and had a daughter with her.
In 1985, he married Josephine Burge; the marriage was intact till his death in 1999.
He passed away of a heart attack while filming for the ‘Gladiator’. He was 61 years old and several scenes of the ‘Gladiator’ had to be completed using CGI techniques. He is interred at Churchtown, County Cork, Ireland.
Trivia
While filming for ‘The Three Musketeers’, this famous British actor was severely injured, when he was stabbed in the throat during a windmill duel scene.
Contrary to popular belief, this famous English actor, of ‘The Three Musketeers’ fame, was a bouncer at a nightclub before he got into acting.
You May Like

See the events in life of Oliver Reed in Chronological Order