Robert K. Merton was an American sociologist, best known as the ‘father of modern sociology.’ He is also known for his significant contributions to criminology. Born in a family of Russian Jews in Philadelphia, which had migrated to the United States in 1904, Robert was raised in a poor family. His father never had a stable job, but Robert said that he did not feel that he lacked anything as a kid. During his teenage years, he became interested in magic, but while attending ‘Temple University,’ he got interested in sociology. He later worked as a research assistant to the famous sociologist sociology Pitrim A. Sorokin at Harvard. Throughout his career, he published 50 papers on the sociology of science. He later became a professor of sociology at Harvard University, Tulane University and Columbia University. For his immense work in sociology, he received many national and international honours. In 1994, he was honoured with the ‘National Medal of Science.’ 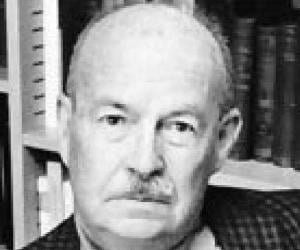 Talcott Parsons
Sociologists #7
Intellectuals & Academics #163
Continue Reading Below
DID WE MISS SOMEONE?
CLICK HERE AND TELL US
WE'LL MAKE SURE
THEY'RE HERE A.S.A.P
Quick Facts

American Celebrities
American Sociologists
American Intellectuals & Academics
Cancer Men
Childhood & Early Life
Robert K. Merton was born Meyer Robert Schkolnick, on July 4, 1910, in Philadelphia, Pennsylvania, USA, to Aaron Schkolnickoff and Ida Rasovskaya. They were Russian Jews and had immigrated to the USA in 1904.
His father could never manage a fixed income to run the household smoothly. The family was always in some kind of financial deficit. Robert first lived with his family in the apartment situated above the milk, bread, and butter store that his father operated. It later burned down and the family faced heavy financial crunch.
Robert kept his birth name for the first 17 years of life. After that he became interested in pursuing magic due to his sister’s boyfriend, who was a magician. He adopted the stage name Robert Mertonwhen he began performing small magic tricks at local parties and gatherings.
By his mid teen years, he was still an aspiring magician and to Americanize his name, he used the surname Merton, which was suggested by one of his friends. He chose his first name, Robert, in honor of the famous French magician Robert-Houdin.
In order to manage finances, his father began working as a carpenter’s assistant. Despite the fact that Merton’s family lived in difficult circumstances, he was always grateful about his talents. He stated that he had nothing to complain about, as he was granted many opportunities to grow further in life.
He attended ‘South Philadelphia High School’ and frequently visited the ‘Andrew Carnegie Library,’ where he became acquainted with cultural and educational concepts. He also used to visit the museums of arts and music.
He was good in academics and performed quite well in the high school. He earned a scholarship to ‘Temple University,’ and in place of his birth name, he entered ‘Robert Merton’ in the admission form.
Continue Reading Below
You May Like

Who Is The Most Popular BTS Member?
Early Career & Sociology
He began attending ‘Temple University’ in 1927, which was a college that had a great infrastructure for the students from the weaker economic background from Philadelphia. George E. Simpson, a faculty member at the college, took him in as a research assistant. One of his first assignments was to write a paper on race and the media, which also touched the themes of sociology.
During his research, Robert came in touch with famous socialists such as Ralph Bunch and Franklin Frazier. George also took Robert to the annual meeting of the ‘American Sociological Association,’ where he was introduced to Pitirim Sorokin, the founding chairman of the Harvard University’s Sociology Department.
Robert applied at ‘Harvard University’ and went to work as a research assistant to Sorokin. Around this time Robert began studying sociology deeply and also started publishing research papers along with Pitirim.
By 1934, he had started publishing his own papers. Some of the early papers that he wrote were ‘Recent French Sociology’, ‘Fluctuations in the Rate of Industrial Invention,’ and ‘Science and Military Technique.’ He received a lot of praise for his work.
He earned an MD and PhD in sociology from Harvard, in 1938. By now, he had written many papers back-to-back, and that made him quite popular in the field of sociology even at a comparatively young age.
One of the most important papers of his career was published in the late 1930s, which was titled ‘Science, Technology and Society in Seventeenth-Century England.’ The research paper that he wrote on the topic became a milestone in the foundation of sociology of science.
He had also started teaching at Harvard. In 1938, he left Harvard and joined Tulane University’s Department of Sociology as professor and chairman.
In 1941, he joined Columbia University and taught at the university for the next five decades. He also wrote several widely celebrated papers, which earned him many awards and honours.
Throughout his illustrious career, he gained international recognition as a sociology expert and wrote more than 50 papers on the topic. However, that does not mean his life was dedicated to sociology, as his researches also ventured around concepts such as organizations, deviance theory and middle-range theory.
Continue Reading Below
Owing to his achievements in the field, Robert won a place in the 9 ‘National Academy of Sciences’ and became the first American to earn a place in the ‘Royal Swedish Academy of Sciences.’ He was also elected a Corresponding Fellow of the ‘British Academy.’
e He was also a member of the ‘American Academy of Arts and Sciences’ and the ’American Philosophical Society.’
’The Focus Group’ method of researching, which is now being widely practised, is credited to Robert.
Robert also happened to be the first sociologist to be named as a ‘MacArthur Fellow.’ He was awarded with honorary degrees by more than 20 universities, such as Harvard, Yale, Columbia, Wales, Oslo, and Leiden.
In 1994, he also became the first sociologist to win the ‘US National Medal of Science.’
He served as an associate director of the university’s ‘Bureau of Applied Social Research’ for a major part of the time he spent at ‘Columbia University.’ In 1971, he was honoured with the university’s highest academic rank, ‘University Professor.’ Three years later, he was honoured with the title of ‘Special Service Professor.’
He also served as an adjunct faculty member at ‘Rockefeller University’ after his retirement from ‘Columbia University,’ in 1979. He took permanent retirement from teaching in 1984.
Personal Life & Death
Robert K. Merton dated Suzanne Carhart in the early 1930s and got married to her in 1934. The couple had three children - a son and two daughters. His son, Robert C. Merton, won a Nobel Prize in economics in the late 1990s.
Robert and his wife separated in 1968. She passed away in 1992. The next year, Robert married Harriet Zuckerman, a sociologist and his frequent collaborator.
Robert passed away on February 23, 2003, in Manhattan. He was 92 at the time of his death.
You May Like

See the events in life of Robert K. Merton in Chronological Order