Riley Keough is a well-known American actress best known for her role in the TV series ‘The Girlfriend Experience.’ She is the daughter of Lisa Marie Presley and granddaughter of the famous singer and actor Elvis Presley. She was also the stepdaughter of the famed singer and dancer Michael Jackson. Born in Santa Monica, California, she made her film debut with a role in 'The Runaways.' The following year, she played the lead role in the film 'The Good Doctor' which flopped at the box office and didn’t do much to propel her early career. However, her work in the hit film 'Magic Mike' increased her popularity. Her other well-known works include the British movie 'American Honey.' The film, which starred her in one of the main roles, earned a nomination for ‘BAFTA Award’ for ‘Best British Film.’ Her popularity grew as she continued to play significant roles in films, such as 'The Discovery' and 'Logan Lucky.' She made her television debut with the lead role in 'The Girlfriend Experience' where she played the role of a law student intern who also works as an escort. Her performance in the series earned her a ‘Golden Globe’ nomination. She is considered an emerging star with a bright future in the American film industry. American People
American Women
California Actresses
Gemini Models
Female Models
Childhood & Early Life
Riley Keough was born on 29 May 1989, in Santa Monica, California, USA. Her father Danny Keough is a musician and her mother is Lisa Marie Presley, daughter of renowned singer and actor Elvis Presley. She has a brother named Benjamin Storm Keough, and two half-sisters.
Continue Reading Below
Career
Riley Keough began her career with a minor role in the 2010 film 'The Runaways.' She portrayed the sister of the lead character. The story takes place in the 1970s and revolves around a rock band of the same name. Though the film received positive reviews, it was a commercial failure.
The following year, she played the lead role in the drama film 'The Good Doctor.' It received mixed reviews and performed very poorly at the box office. The same year, she also appeared in the film 'Jack & Diane' in the lead role. The film received mixed reviews.
In 2012, she played a role in the hit film 'Magic Mike.' Directed by Steven Soderbergh, the film was a huge commercial success. It won multiple awards as well. The same year, she also played the lead role in the film 'Yellow' and then played a supporting role in the film 'Kiss of the Damned.'
She was next seen in the 2015 action film 'Mad Max: Fury Road' in a supporting role. The film was a commercial success, also winning six ‘Oscars’ out of ten nominations. The critically acclaimed film helped establish Riley as a talented actress to reckon with. She next played a main role in the film 'Dixieland' which released the same year.
In 2016, she appeared in the film 'Lovesong' in a main role. The film received positive reviews. She next appeared in the British film 'American Honey.' The film was a commercial failure, though it was met with positive reviews. It also won numerous awards. The same year, she made her television debut, playing the lead role in ‘The Girlfriend Experience.’ She was part of its first season which aired from April to June 2016.
She next appeared in the sci-fi film 'The Discovery' which released in 2017. It was met with mixed reviews. She was then seen in the film 'We Don't Belong Here' in a supporting role. In 2017, she appeared in the psychological horror film 'It Comes at Night' and in the heist comedy film 'Logan Lucky.’
In the year 2018, she was cast in the lead role opposite Andrew Garfield in the neo-noir black comedy thriller ‘Under the Siler Lake.’ The same year, she was also seen in movies like ‘Welcome the Stranger,’ ‘The House that Jack Built,’ and ‘Hold the Dark.’
In 2019, she was seen playing prominent roles in the critically acclaimed horror movie ‘The Lodge’ and psychological mystery thriller ‘Earthquake Bird.’ In 2020, she portrayed 'Stefani' in Janicza Bravo's comedy-drama film ‘Zola,’ which had its world premiere on January 24, 2020, at the 'Sundance Film Festival.'
Major Works
Her performance in ‘Mad Max: Fury Road,’ a 2015 Oscar-winning action film, is one of the significant works of Riley Keough. Directed by George Miller, the film also had actors like Tom Hardy, Charlize Theron, Nicholas Hoult, Zoe Kravitz, and Rosie Huntington-Whiteley. The film was a critical and commercial success. The film was nominated for a total of ten ‘Academy Awards,’ out of which it won six.
‘The Girlfriend Experience’ is an American anthology drama series starring Riley Keough in the lead role. Other actors in the show include Paul Sparks, Mary Lynn Rajskub, Louisa Krause, Anna Friel, and Carmen Ejogo. The series has received positive reviews, and earned Riley a ‘Golden Globe’ nomination for her performance. It narrates the story of a law student intern who also works as an escort.
Among Keough’s important works is her role in the heist comedy film ‘Logan Lucky.’ The film was directed by Steven Soderbergh. Along with Keough, it starred Channing Tatum, Adam Driver, Seth Macfarlane, Katie Holmes, and Katherine Waterston. The film was met with positive reviews and was an average commercial success.
Awards & Achievements
Riley Keough was nominated for an award at the ‘Milano Film Festival’ in 2012 under the ‘Best Supporting Actress’ category for her role in the film ‘The Good Doctor.’
In 2017, she won the ‘Gracie Award’ as well as earned a nomination for the ‘Golden Globe Award’ for her performance in the TV series ‘The Girlfriend Experience.’
Her role in the film ‘American Honey’ also earned her multiple award nominations.
Personal Life
Riley Keough married stuntman Ben Smith-Petersen in 2015. They started dating in 2012 after meeting each other while filming ‘Mad Max: Fury Road.’

See the events in life of Riley Keough in Chronological Order 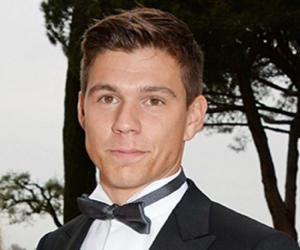