Ricky Dene Gervais is an English comedian, actor, director, producer, and singer. A philosophy graduate from University College London, he began his career as a singer, failing which he joined University of London Union as an assistant events manager, working there for eight years. Concurrently, for a brief period, he also acted as the manager of the newly formed band, Suede. Eventually, he turned to comedy, joining the new radio station Xfm as head of speech, where he met his long-time collaborator, Stephen Merchant. The duo first came to the limelight with the mockumentary, ‘The Office’, winning several prizes for it. It was followed by the equally successful ‘The Ricky Gervais Show’ on Xfm and ‘Extras’ on BBC Two. As his fame spread internationally, he began to receive offers from Hollywood, starring in films like ‘Ghost Town’ and ‘Muppets Most Wanted’. He also wrote, directed and starred in films like ‘The Invention of Lying’, ‘Cemetery Junction’ and ‘Special Correspondents’. He was a host at the Golden Globe Awards ceremony numerous times and was named on the Time 100 list of the world's most influential people in 2010. British People
Comedians
British Men
University College London
Cancer Actors
Childhood & Early Life
Ricky Dene Gervais was born on 25 June 1961 in Reading, England. His father, Lawrence Raymond Gervais, was a Franco-Ontarian who came to England on foreign duty during the Second World War. Later, he earned his living as a laborer and hod carrier.
His mother, Eva Sophia née House, was a homemaker of English descent. Ricky was born the youngest of his parents’ four children, having two elder brothers named Larry and Robert and an elder sister named Marsha.
Ricky was raised on a council estate in Whitney, the southern suburb of Reading. Although his family was not rich, they were happy. His mother, known for her wit, helped to make humor an integral part of their family life and they made constant fun of each other.
As a child, he was very introspective. When he was eight years old, one of his brothers asked him why he believed in God. This along with his mother’s reaction made him question his belief and within an hour he became an atheist, a conviction he holds till now.
He began his education at Whitney Infant School and then moved to Whitney Junior School. During this period, he showed a keen interest in science, receiving a microscope at the age of ten or eleven. By thirteen, his interest had become more intense.
For his secondary education, he enrolled at Ashmead Comprehensive School, graduating from there in 1979. Thereafter for a short while, he worked as a gardener at the Reading University.
In 1980, he joined University College London to study biology. But very soon, he realized that if he studied biology he would have to attend classes for forty hours a week; however, if he took up philosophy, he would have to toil much less. Within two weeks, he shifted to philosophy.
In 1983, Ricky Gervais graduated from University College London, earning an upper second-class honors degree in philosophy and then entered University of London. However, he never graduated from there. Instead, he started working as an assistant events manager at the University of London Union (ULU). 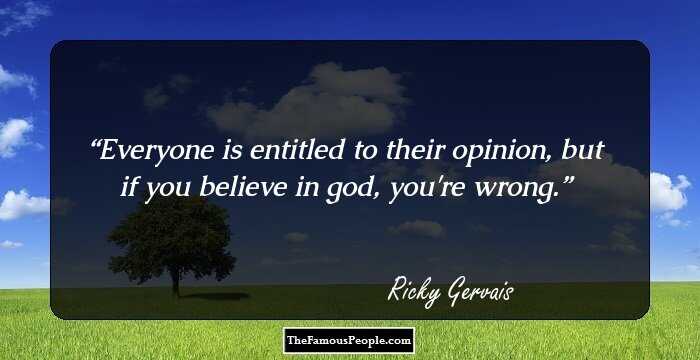 Quotes: Believe
Continue Reading Below
Early Career
In June 1982, while studying at UCL, Gervais formed a musical group called Seona Dancing with his friend Bill Macrae. They co-wrote a number of songs, which were sung by Gervais while Macrae played the keyboard. Eventually, they made a sixteen-song demo tape and were signed by London Records.
In 1983, London Records released two of their songs, ‘More to Lose’ and ‘Bitter Heart’. Unfortunately, in spite of being promoted, they were commercial failures and so the band split up in 1984.
Gervais remained with the University of London Union (ULU) until 1996. Thereafter in 1997, he joined a new radio station called Xfm as head of speech, where he hosted his own nightly programs. Concurrently, he also began to contribute regularly to Mary Ann Hobbs’ Radio 1 show.
At the end of 1997, Gervais felt the need of an assistant. By a twist of fate, the first CV that was handed over to him was that of Stephen Merchant and he called him for an interview, eventually hiring him as his assistant.
From January 1998 to August 1998, Gervais and Merchant hosted a Saturday afternoon radio show. For it, they created features like 'Hip Hop Hooray', 'Make Ricky Gervais Laugh' and 'Song for the Ladies'. However, broadcast from 4 to 6 pm, it failed to attract a very large audience.
In August 1998, Xfm was taken over by the Capital Radio Group, making Gervais’ position redundant. Eventually, both the men left Xfm and Merchant began a production course at the BBC. As part of his coursework, he made a short film called ‘Seedy Boss’, enlisting Gervais to perform in it.
Also in 1998, they collaborated on a sitcom pilot, which was aired in September 1998 on the ‘Comedy Lab’ series of the Channel 4. Titled ‘Golden Years’, it was about a manager suffering from mid-life crisis. The pilot failed to find further success.
In 2000, he contributed comedy sketches to ‘Bruiser’, a TV comedy sketch show aired on BBC Two. Later in the same year, he began to appear regularly on Channel 4’s highly popular ‘The 11 O’Clock Show’.
Buoyed by his popularity in ‘The 11 O’Clock Show’, Gervais began to host his own talk show, ‘Meet Ricky Gervais’ on Channel 4. Aired on Friday nights, each episode had two celebrity guests. However, the program did not last long, running from 22 September to 27 October 2000.
Continue Reading Below 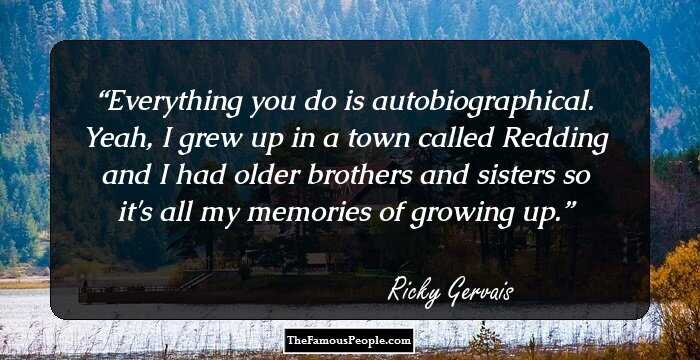 On Gaining Success
In late 2000, concurrently with hosting ‘Meet Ricky Gervais’, Gervais began working with Stephan Merchant on a mockumentary called ‘The Office’. The work, a fictional event presented as a documentary, was initially inspired by Merchant’s 1998 coursework, ‘Seedy Boss’.
Aired on BBC Two, it initially failed to draw good ratings and was about to be dropped. Later, it gained in popularity, running from 9 July 2001 to 27 December 2003, winning several awards. Thereafter, realizing that it would not get any better, they put an end to the show.
In August 2001, concurrently with working for ‘The Office’, Gervais launched ‘The Ricky Gervais Show’, a popular comedy show at Xfm. Although it was named after him, it also starred Stephen Merchant and Karl Pilkington.
In 2003, he went on a tour across Great Britain with his standup comedy show called ‘Animal’. In the following year, he once again toured across the country with another of his standup comedies, ‘Politics’. Both these comedies were recorded and released as DVDs.
In 2004, Gervais published his first book, ‘Flanimals’, which depicted a number of apparently useless or inadequate animals. It would be followed by ‘More Flanimals’ (2005), ‘Flanimals of the Deep’ (2006), ‘Flanimals: The Day of the Bletchling’ (2007) and ‘Flanimals: Pop Up’ (2009).
‘The Ricky Gervais Show’ ran until the middle of 2005. Thereafter, in December 2005, it was turned into a free video podcast by Guardian Unlimited. It ranked number one throughout January and February 2006, gaining an average of 261,670 downloads per episode during the first month.
In July 2005, Gervais and Merchant launched ‘Extras’, a sitcom on extras working in television, film, and theatre. They not only created, wrote and directed the series, but also starred in it with Gervais appearing in the role of Andy Millman.
Debuting on BBC Two on 21 July 2005, ‘Extras’ became highly popular both in UK and USA, receiving great critical acclaim and a number of awards. Apart from a Christmas Special, it ran for two series of six episodes each. Also in 2005, he launched an American version of ‘The Office’.
Continue Reading Below
In 2007, he went on his third tour across the country with his standup comedy, ‘Flame’. In July, he performed at the ‘Concert for Diana’ in Wembley Stadium, singing ‘Free Love Freeway’, a song he had written and sang in ‘The Office’.
In 2008, he starred in an American fantasy comedy film called ‘Ghost Town’, appearing as a misanthropic dentist, who could communicate with ghosts. It was his first leading role in a feature film. Earlier in 2006, he had performed in films like ‘For Your Consideration’ and ‘Night at the Museum’.
Also in 2008, he went on an eleven-date country-wide tour with the standup comedy ‘Science’, commencing it at Glasgow in August. In November, he attended the sixth annual New York Comedy Festival, held in New York City, USA, making headlines for his acts.
In 2009, he made his directorial debut in feature films with ‘The Invention of Lying’, starring in it as Mark Bellison. He also co-wrote the script and co-produced the film. Also in the same year, he appeared as Dr. McPhee in ‘Night at the Museum: Battle of the Smithsonian’.
In February 2010, he launched a cartoon series, ‘The Ricky Gervais Show’. An animated version of his 2005 audio podcasts of the same name, it ran for 39 episodes, ending in July 2012.
Also in 2010, he produced and starred in a road trip comedy series called ’An Idiot Abroad’. In the same year, he also wrote and directed a coming-of-age comedy-drama film called 'Cemetery Junction'. Although a fictional work, it was actually based on his experiences as a teenager.
In 2011, Gervais and Merchant launched their second mockumentary, ‘Life’s Too Short’, which starred Warwick Ashley Davis. Davis, born with an extremely rare form of dwarfism, was one of their costars in one of the episodes of ‘Extras’ and the idea for this show came from him.
In ‘Life’s Too Short’, Davis played a fictionalized version of himself while Gervais and Merchant played supporting roles. In Great Britain, it premiered on 10 November 2011, running on BBC Two till 30 March 2013. In USA, it ran from 19 February 2012 to 5 July 2013 on HBO.
In 2012, he wrote, directed and starred in a comedy drama television series called ‘Derek’. While the pilot was aired on Channel 4 on 12 April 2012, the actual show began airing on 30 January 2013. It ran for fourteen episodes in two series, ending on 28 May 2014.
Continue Reading Below
In 2013, he appeared as Mr. James Bing, a sarcastic computer, in an animated science fiction-comedy film called ‘Escape from Planet Earth’. In 2014, he appeared as the villain, Dominic Badguy/The Lemur in ‘Muppets Most Wanted’ and again as Dr. McPhee in ‘Night at the Museum: Secret of the Tomb’.
In 2014, Gervais started writing the script of ‘Special Correspondents’, which he later directed and starred in. The filming began in May 2015. The film, which was a remake of the 2009 French comedy ‘Envoyés très spéciaux,’ was released in April 2016. It garnered mostly negative reviews.
Concurrently with working on ‘Special Correspondents’, Gervais also wrote, directed, starred and produced ‘David Brent: Life on the Road’, releasing the mockumentary comedy film in August 2016 to medium reviews. His upcoming work, 'Blazing Samurai', in which he appears as Ika Chu, a villainous cat, is slated to be released soon.
Major Work
Ricky Gervais is best known for his mockumentary called ‘The Office’. He not only co-wrote the script, but also directed and starred in it, playing the role of David Brent, the central character of the series, winning a number of awards for it. 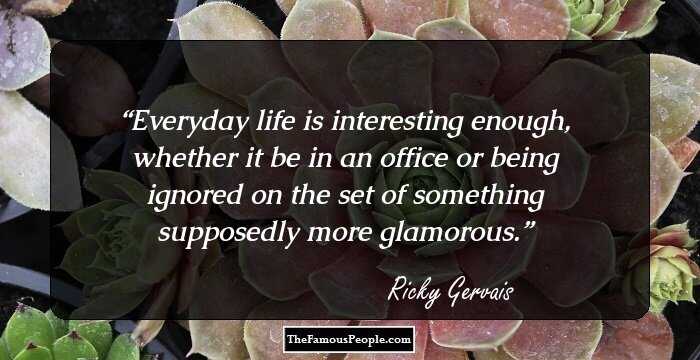 Family & Personal Life
Since 1984, Ricky Gervais has been living with Jane Fallon, a well-known producer and author, whom he had met in 1982 while studying at University College London. The couple lives between Hampstead and New York City.
According to Gervais, an atheist, they did not marry because there is no point in having a “ceremony before the eyes of God because there is no God”. The couple also chose not to have any children.
A humanist and a staunch supporter of gay rights, he states, "You can't take equality 'too far'." Currently, he is a patron of ‘Humanist UK’.
Trivia
Although Gervais’ first song, ‘More to Lose’ was a commercial failure in England, it became an instant hit in Philippines, sweeping the nation’s dance bars after being broadcast by DWRT-FM in 1985. However, they deliberately misnamed the song as ‘Fade’ by Medium. Its true identity was revealed after one year.

Quotes By Ricky Gervais | Quote Of The Day | Top 100 Quotes

See the events in life of Ricky Gervais in Chronological Order 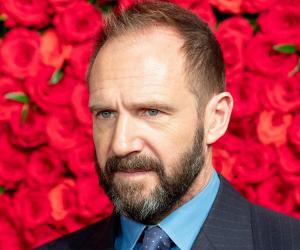