Advanced Search
Richard Pryor was an American stand-up comedian, actor, television writer, and social critic. A highly-acclaimed comedian, he was as renowned for his hilarious improvisations during his live comedy shows as for his dashing lifestyle, multiple affairs, and a lifelong battle with drug addiction. He influenced many up-and-coming, modern comic artists with his flair for captivating the audience with minute observations and skillful storytelling. Considered as one of the greatest comedians of his generation, Pryor influenced generations of stand-up comedians and was referred to as ‘The Picasso of our Profession’ and ‘The Seminal Comedian of the Last 50 Years' by his colleagues. Pryor was one of the top entertainers of the 1970s and 1980s and holds the honor of being listed at the top spot on Comedy Central's list of ‘All-Time Greatest Stand-Up Comedians’ and ‘Rolling Stone’ magazine’s ‘Fifty Best Stand-Up Comedians of All Time’ list. Pryor was an animal rights activist and campaigned for the protection of elephants. American Celebrities
Black Actors
Stand-up Comedians
Black Stand-up Comedians
Black Film & Theater Personalities
Childhood & Early Life
Richard Pryor was born Richard Franklin Lennox Thomas Pryor on December 1, 1940, in Peoria, Illinois, USA, to LeRoy "Buck Carter" Pryor, a former boxer and hustler who also served the military during ‘World War II,’ and Gertrude L. (née Thomas).
He was raised in a brothel run by his grandmother. His mother, who worked as a prostitute in the brothel, abandoned him when he was ten years old. He was then raised by his grandmother Marie Carter. His upbringing was stern and unforgiving. His grandmother was a violent woman who would beat him up for the smallest of mistakes.
Pryor was one of the four children raised in his grandmother's brothel. He was sexually abused at the age of seven by a teenage neighbor and later by a preacher.
Despite his difficult childhood, he made others laugh at school by playing a clown. He discovered his passion for acting in his early teens.
He was expelled from school at the age of 14. He then took up several odd jobs before joining the military.
Pryor served in the army for only two years before he was discharged for fighting with another soldier. 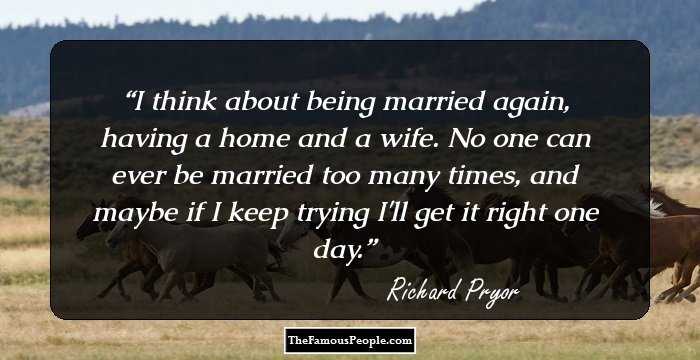 Quotes: Think, Home, Trying, I
Continue Reading Below
Career
After his stint in the military, Richard Pryor moved to New York City to try his luck in acting in 1963. He then began performing at various clubs in New York.
In 1964, he made his television debut on the variety show 'On Broadway Tonight.'
He debuted on the big screen in 1967 with ‘The Busy Body.’ He followed it up by appearing in ‘Wild In The Streets’ in 1968. Pryor’s first, self-titled comedy album released in 1968. It was inspired by the turbulent years of his life.
The early-1970s were successful for Pryor. He released his second album ‘Craps (After Hours).’ His big breakthrough came in 1972 when he landed a role in a tragi-comic documentary titled ‘Wattstax.’
Pryor’s original content started attracting a lot of attention. His comedy was like a breath of fresh air, despite its X-rated content. Richard’s third comedy album ‘That Nigger’s Crazy’ sold extremely well and won the ‘Grammy Award’ for ‘Best Comedic Recording’ in 1976. The late-1970s saw him thrive as an actor, with acclaimed performances in 11 films.
His career suffered a major blow because of his drinking, smoking, and drug addiction. When his health improved, he picked himself up and started working on the film which became known for his fine performance. The film 'Richard Pryor: Live in Concert' (1979) garnered a lot of praise and was sold out in many urban movie theaters.
In 1980, Richard Pryor allegedly tried to commit suicide by pouring rum all over him and lighting himself on fire. He was restrained by the police while running on the street and taken to a hospital for treating severe burns.
After recovering, he returned to stand-up comedy and acting. In 1983, Pryor became one of the highest-paid African-American actors, reportedly charging $4 million to play an evil henchman in ‘Superman III.’
In 1986, he produced and directed his biographical comedy-drama film ‘Jo Jo Dancer, Your Life Is Calling.’ In the film, he played ‘Jo Jo Dancer,’ a stand-up comedian who burns himself while freebasing cocaine. The film was not successful.
Continue Reading Below
In 1986, after being diagnosed with multiple sclerosis, he did his best to remain active, starring in several movies. By the early-1990s, he was confined to a wheelchair; he kept performing stand-up comedy and acting. His last film appearance was in 'Lost Highway' (1997). 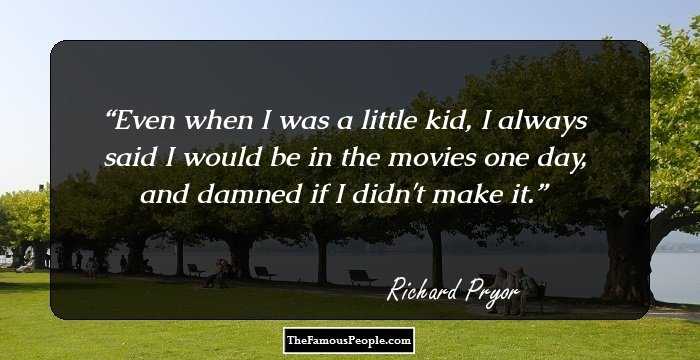 Quotes: I
Major Work
Richard Pryor’s first major success was his third album ‘That Nigger’s Crazy,’ which released in 1974 and became a certified gold hit. His next two albums, ‘….Is It Something I Said?’ and ‘Bicentennial Nigger,’ enjoyed similar critical and commercial success.
He starred in 12 movies during the ‘70s and ‘80s. These movies include box office hits, such as ‘Lady Sings the Blues’ (1972), 'Silver Streak' (1976), and ‘Blue Collar’ (1978).
Pryor joined hands with Gene Wilder for the popular crime comedy movie 'Stir Crazy' (1980); the film was a huge hit at the box office, earning more than $100 million.
The comedian wrote his autobiography 'Pryor Convictions: And Other Life Sentences' with Todd Gold, earning critical acclaim upon its release in 1995.
Awards & Achievements
He won an ‘Emmy Award’ in 1973 (Best Writing in Comedy in collaboration with Lily Tomlin) for his work in 'The Lily Tomlin Show.'
He won three consecutive ‘Grammy Awards’ from 1974 to 1976 for ‘Best Writing in Comedy.’ He won his other ‘Grammy Awards’ in 1981 and 1982.
Pryor co-hosted the ‘Academy Awards’ twice; in 1977 and 1983.
Continue Reading Below
He won two ‘American Academy of Humor Awards’ and a ‘Writers Guild of America Award’ for his stand-up comedy acts.
The first ever ‘Kennedy Center Mark Twain Prize for American Humor’ was presented to him in 1998. 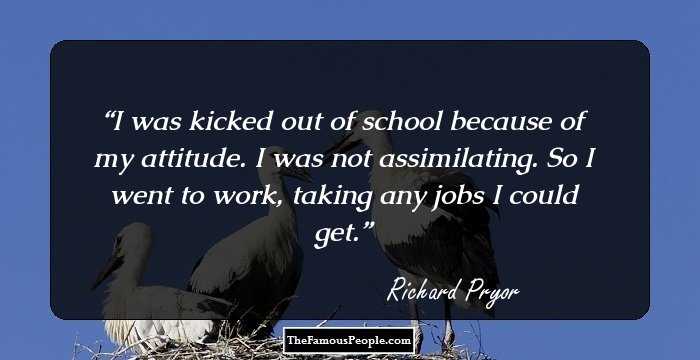 Quotes: I
Personal Life & Legacy
Pryor was married seven times to five women and fathered seven children.
His first daughter Renee Pryor was born to his then girlfriend Susan in 1957, when he was 16 years old.
He married Patricia Pryor in 1960 and had a son, Richard Pryor Jr., in 1962. He divorced Patricia the following year.
His third child Elizabeth Ann was born in April 1967 to his girlfriend Maxie Anderson.
He married Shelley Bonus in 1967 and divorced her in 1969. The couple had a child, Rain Pryor, born in April 1969.
On 22nd September 1977, he married Deborah McGuire. They divorced the following year.
He married Jennifer Lee in August 1981 and divorced her the next year.
He married Flynn Belaine in October 1986 and divorced her the next year. He married her again in April 1990, but divorced her again in July 1991. The couple had two children; Steven, born in 1984, and Kelsey, born in October 1987.
He fathered a child named Franklin, born in 1987, with actress and model Geraldine Mason.
He also had relationships with actresses, Pam Grier and Margot Kidder. He married Jennifer Lee again in June 2001 and remained married to her until his death.
He died at age 65, on December 10, 2005, suffering a heart attack in Los Angeles.
Trivia
He was the second cousin of actor and rapper Ludacris.
He was a longtime advocate against animal cruelty.

Quotes By Richard Pryor | Quote Of The Day | Top 100 Quotes

See the events in life of Richard Pryor in Chronological Order