Richard Samuel Attenborough was a British actor, filmmaker, politician, and entrepreneur. He is best known for bringing on screen the life and teachings of the great Indian leader Mohandas Karamchand Gandhi in the epic movie ‘Gandhi.’ Born to a scholar and academician father, Richard chose an unlikely profession for himself. Starting out as an actor, he was initially stereotyped as someone who played cowardly characters. He then went on to play various characters, proving his versatility as an actor. He began his acting career as a theatre artist before moving on to work in films. A prolific actor, he worked tirelessly and was one of the most talented British actors ever to grace the silver screen. Attenborough had already made a mark as an actor, but he became an international icon when he directed the film ‘Gandhi’ for which he received two ‘Academy Awards.’ Apart from ‘Gandhi,’ he also made several other successful movies like ‘Cry Freedom,’ which too was based on the life of a social activist. He also served as the president of ‘British Academy of Film and Television Arts’ (BAFTA) and the ‘Royal Academy of Dramatic Art’ (RADA).

Richard Samuel Attenborough was born on 29 August 1923, in Cambridge, United Kingdom, to Frederick Attenborough and Mary Clegg. His father was a scholar and a fellow of the ‘Emmanuel College,’ Cambridge. His mother was a founding member of the ‘Marriage Guidance Council.’

He studied at ‘Wyggeston Grammar School for Boys’ in Leicester before attending the ‘Royal Academy of Dramatic Art’ (RADA) where he studied drama.

His family was principled and socially responsible. His parents adopted two German Jewish refugee girls in 1939 and raised them along with their three boys. 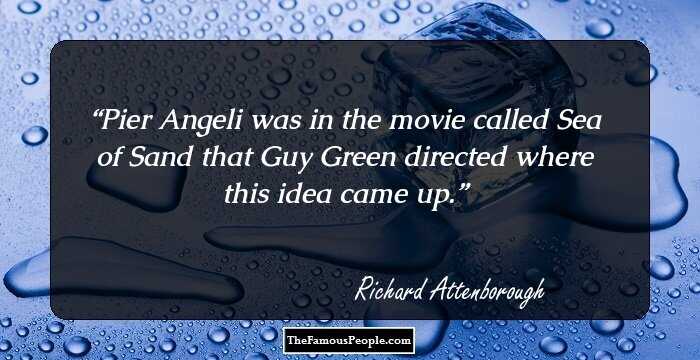 He served in the ‘Royal Air Force’ during the ‘Second World War.’ He flew over Europe with the ‘Film Unit’ and filmed from the rear gunner’s position on several occasions.

He began his acting career on stage before moving to Hollywood. He appeared in his first film in 1942 in an uncredited role.

His breakthrough role came in 1948 when he played ‘Pinkie Brown’ in the film ‘Brighton Rock,’ which was based on Graham Greene’s novel. His role was much appreciated.

The 1950s were a very productive time for Attenborough who had become a popular actor by now. During the ‘50s, he appeared in several comedies like ‘Private’s Progress’ (1956) and ‘I’m All Right Jack’ (1959).

In 1963, he got an opportunity to appear in ‘The Great Escape’ as ‘Squadron Leader Roger Bartlett.’ The movie went on to become a major blockbuster.

In 1966, he starred alongside Steve McQueen and Richard Crenna in the period war film ‘The Sand Pebbles,’ which narrated the story of a rebellious U.S. Navy Machinist’s Mate.

He made his directorial debut with ‘Oh! What a Lovely War!’ in 1969. The film was based on a stage musical of the same name. The film had an ensemble cast of John Mills, Laurence Olivier, and Jack Hawkins.

In 1977, he played a role in an Indian film, directed by Satyajit Ray. He portrayed the character of ‘General Outram’ in the film titled ‘Shatranj Ke Khilari,’ which was based on a short story by Munshi Premchand.

During the 1980s, he seldom took up acting roles and focused more on direction. In 1982, he produced and directed ‘Gandhi,’ a biographical film about the famous Indian leader Mohandas Gandhi. The film was a huge critical and commercial hit.

In 1987, he directed ‘Cry Freedom,’ which was based on the activities of black social reformer Steve Biko. The film was set in the apartheid era of South Africa. Biko was a man Attenborough greatly respected.

He played the role of ‘John Hammond’ in the 1993 science fiction film ‘Jurassic Park.’ The movie, which became a super hit, spawned a sequel titled ‘The Lost World: Jurassic Park’ in 1997 in which he reprised his role.

In 1998, he played ‘Sir William Cecil’ in a biographical drama film titled ‘Elizabeth.’ The following year, he produced and directed a biopic titled ‘Grey Owl.’ He directed his last movie ‘Closing the Ring’ in 2007. 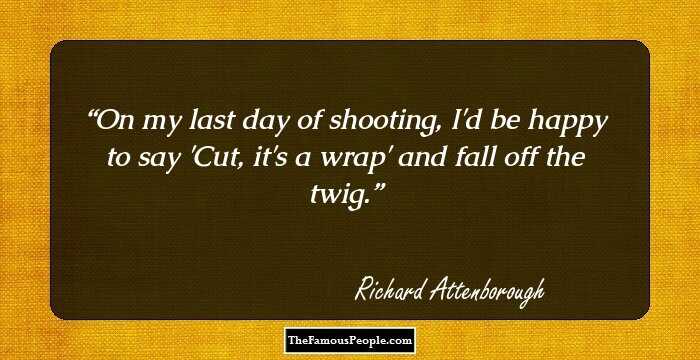 The 1982 movie ‘Gandhi’ is considered to be his masterpiece. Based on the life of the popular Indian nationalist Mohandas Gandhi, this movie was very close to Attenborough’s heart. The film was well received by the critics and won numerous awards and nominations. 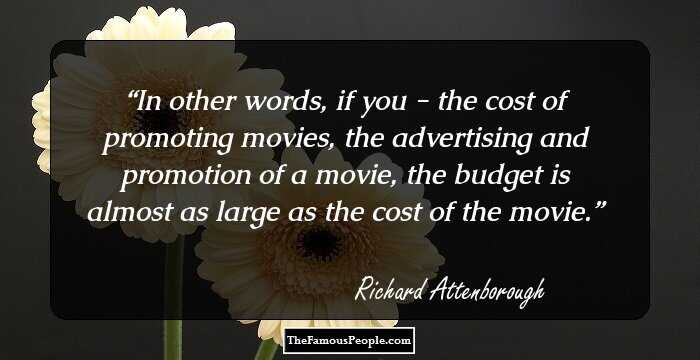 He married actress Sheila Sim in 1945. The couple was happily married and blessed with three children. His daughter Jane perished in the Asian tsunami in 2004.

He was a dedicated philanthropist and served as the president of the ‘Muscular Dystrophy’ campaign.

He believed that everyone, irrespective of race, color, or ethnicity, should get the right to education. He was actively involved with the ‘United World Colleges’ movement and the ‘Waterford Kamhlaba United World College of Southern Africa.’

His health had been deteriorating over the last few years of his life. He breathed his last on 24 August 2014, five days before his 91st birthday.

British naturalist David Attenborough was the younger brother of this great actor and director.

This famous film director was a big fan of Picasso ceramics and had a vast collection of them.

Quotes By Richard Attenborough | Quote Of The Day | Top 100 Quotes

See the events in life of Richard Attenborough in Chronological Order