Randy Moss, the eminent former American football wide receiver, was capable enough to make any defense in the sports of football, wake up to a haunting dream. An incredibly athletic individual, Moss took the world of sport by storm, with a record smashing season in his first year with Marshall University. Though there were many who questioned his potential and integrity after a dry season, his stellar performance with New English patriots was the best answer he could give back to his critics. Despite switching from one team to another, his performance never witnessed as slump as he broke all records. Through his performances, he proved on more than one occasion, that he was a force to be reckoned with and that his talent was par excellence. Consequently, New York Times labeled him as "National Football League's biggest enigma”, but the fame was all very short-lived. His off-field behavior landed him in huge trouble, and he was sentenced to a sixty day imprisonment for indulging in a racial fight and for being tested positive for marijuana. Despite his failing public image, the fact that he is still admired and followed by numerous fans, is a testament to his exceptional talent. If you would like to learn more about this personality, scroll further. American People
Marshall University
Florida State University
Tall Celebrities
Tall Male Celebrities
Childhood & Early Life
Randy Moss was born in West Virginia to Maxine Moss and Randy Pratt. He attended the DuPont High School in Belle, West Virginia, where he was made the captain of the school football team. He led his team to victory and won the state AAA football title, which is the highest honor in football in West Virginia.
He also was a part of the basketball team and won the state titles in 100 meter and 200 meter dashes. By the time he completed high school, he had 109 catches, 44 touchdowns and 2,435 yards to his credit in football.
In 1995, following his graduation from high school, he was presented a scholarship to play football at the University of Notre Dame. However, before joining the college, he got involved in a racially motivated fight, for which he received a 30 day suspended jail sentence. After pleading guilty, the university revoked his scholarship. 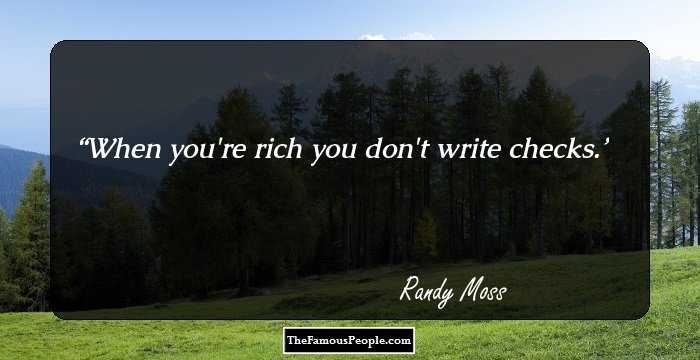 In 1996, after his jail term, he moved to Florida State though his stay there was short. He was transferred to Marshall University, where he set many records including a touchdown catch in a season, most consecutive games with a touchdown catch, most TD passes caught by a freshman and most receiving yards gained by a freshman.

His performance also helped the university team to have an undefeated season and helped them win the national title in the school's last season in Division I-AA. Though he was recognized as a player with a lot of potential, he was transferred from one team to another mainly because of his off-field squabbles and his violent mood swings.

In 2005, he moved to Oakland Raiders where his performance lacked the concentration and intensity, which created further problems for the already downtrodden franchise. People started saying that his career was spiraling downwards.

In 2007, when he was acquired by the New England Patriots, he silenced the skeptics with his brilliant performance. He had one of the best seasons in the NFL history, posting 1,493 yards and an NFL record 23 touchdown receptions.

On August 1, 2011, his agent, Joel Segal, announced Moss’s decision to retire from football.

In February 2012, Moss announced his decision to revoke his retirement. On March 12, 2012, He signed a one-year contract with the San Francisco 49ers on undisclosed financial terms.�He finished his season with San Francisco 49ers with 28 catches for 434 yards and three touchdowns.

In 2016, he joined ESPN and appeared as analyst for Sunday NFL Countdown and Monday Night Countdown.

In 1998, he was bestowed with AP NFL Offensive Rookie of the Year, an award given to the top American football rookie in the National Football League (NFL).

He was also named one of the 50 Greatest Vikings.

In 2018, Randy Moss was inducted into the Pro Football Hall of Fame.

In 2019, he was named to the National Football League 100th Anniversary All-Time Team.

Randy Moss was in a relationship with Libby Offutt and they have four children; two daughters, Sydney and Senali, and two sons, Thaddeus and Montigo.

Trivia
This famous American footballer was known as the ‘The Freak’ among his teammates at Marshall University.

See the events in life of Randy Moss in Chronological Order